The Poetry of Philippe Petit

Nearly 10 years ago I was asked to write a couple of entries for Encarta, Microsoft’s encyclopedia, about certain celebrities they suddenly deemed encyclopedia-worthy. They included sports stars (Ivan Rodriguez, Lindsey Davenport), a movie star (Meg Ryan) and Philippe Petit, a French funambule, or wire walker. When I started, Petit was the one I knew, and cared about, the least. By the time I finished, the reverse. 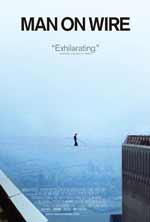 Two years ago, when I was writing a piece on the history of the World Trade Center in movies, I came across him again, in Ric Burns’ documentary, “New York.” Petit was featured, of course, in the eighth episode, about the World Trade Center, created post-9/11. Although he fascinated, although you could say he was the best part of that very good documentary, I couldn’t fit him into my story. My story went a different way. But I have fond memories of watching the footage of him dancing on the wire between the two towers in 1974, and, more, of the cop, that great New York cop, talking about the poetry of him dancing out there above the void.

Now James Marsh has a documentary about the incident called Man on Wire, which got a great write-up by A.O. Scott in the Times yesterday. I would love to see it, but, at the moment, it’s playing at the Landmark Sunshine Cinema in New York and...c’est tout. Monday it starts in the Lumiere in San Francisco but that’s still a fur piece. I’m hoping it plays in Seattle soon.

Trumbo, for those keeping track, still hasn’t made it.