The Men Who Played James Bond, 007

Today is the U.S. release of “Skyfall,” the 23rd James Bond film. Below is a retrospective on the men who have played Bond, James Bond, over the years. Sans one-timers. Sorry, George Lazenby.

Sean Connery
What’s startling about watching the first Bond movies is how tepid they are. Since each Bond must inevitably trump the Bond before it — bigger stunts, wilder gadgets, crazier villains — it makes sense that each preceding Bond is trumped. We’re used to Bond whizzing all over the planet, but in the first film, “Dr. No,” Bond flies to Kingston, Jamaica, boats to Crab Key island ... and that’s it. The fights are early 1960s judo flips, the “stunt” a car chase along a mountain road. When a tarantula is unleashed in Bond’s hotel room, he kills it with his dress shoe, seeming more frightened husband than secret agent.

But these Bond films quickly established a formula and kept to it. In the pre-title sequence we watch the end of Bond’s previous adventure or the beginning of his new opponent’s villainy. After the titles, Bond is given his assignment and gadgets. In an exotic locale, he meets his local contact, usually ethnic, who usually dies halfway through the picture. There are chases, attempts on Bond’s life, meetings with the new villain and the new villain’s super-powered henchman. He beds three women: The inconsequential one at the beginning, an enemy agent in the middle, then “the Bond girl,” with whom he shares the final assault on the enemy’s fortress. There, captured, he learns the villain’s diabolical plot to a) blackmail the West, b) start World War III, or c) both. Left to die, he escapes, kills the henchman, blows everything up, and winds up with the girl on a raft in the middle of the ocean, a double entendre on his lips, sex on his mind. Cue credits and “James Bond will return in...”

Nobody had seen anything like it. Imitators popped up everywhere. Most were American and forgettable. The best was British and anti-Bond: Michael Caine as the bespectacled gourmand Harry Palmer in “The Ipcress File” and “Funeral in Berlin.” 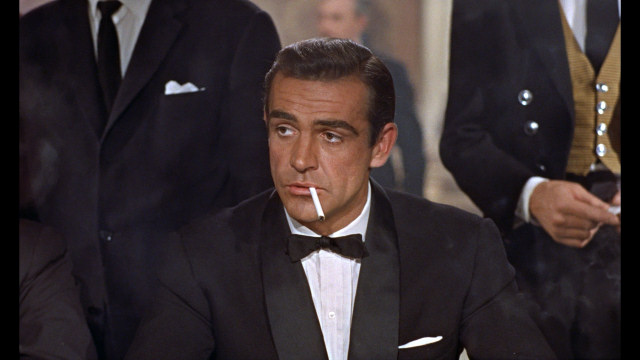 Roger Moore
Bond was an establishment figure, given to fine clothes and fine champagne, while the heroes of the early 1970s tended to be anti-establishment and rumpled. As a result, even when the producers coaxed Connery back for one more turn, Bond lost some of his polish. He didn’t play baccarat in Monte Carlo wearing a tux; he played craps in Vegas in his shirt sleeves. Jill St. John became the first American Bond girl, and she was dumber than the other Bond girls. Bond calls her a twit and slaps her. He rides a three-wheeler through the desert and leads police on a car chase through Vegas. The cops keep crashing into each other. Yee-ha.

So it would be throughout the Roger Moore ’70s. SPECTRE, cigarettes and the baccarat table all disappeared, while car chases (a la “Bullitt”) and car jumps (a la Evel Knievel) became essential. Bond was now less imitated, more imitator. “Live and Let Die” was the blaxploitation Bond; “The Man with the Golden Gun” contained elements of “Enter the Dragon.” Bond fought a henchman named Jaws two years after “Jaws.” After “Star Wars,” Bond went into outer space.

Timothy Dalton
In the 1980s, movies were increasingly filled with action heroes in the Bond mould — Indiana Jones, Arnold Schwarzenegger, John McClane — and Timothy Dalton’s Bond responded by becoming more like them rather than like himself. His tastes were pedestrian. He favors leather jackets rather than tuxes. In “License to Kill,” a girl orders a Bud with a lime and Bond, the man who thinks it’s a crime to drink Dom Perignon ’53 above 38 degrees, tells the waitress: “Same.” He made headlines by becoming, in the age of AIDS, monogamous (one or two girls per film, instead of three), but the bigger story was missed: this Bond hardly flirted anymore. Dalton has a shy smile, and he employed it with women in his films. He seems almost ... puppyish.

And how does this new, bashful Bond bring the beautiful enemy agent over to his side? In “The Living Daylights” he tells the girl the truth. And in “License to Kill” he’s just, well, a nice guy. Nice guys and truth-tellers around the world rolled their eyes.

Pierce Brosnan
In 1995, Pierce Brosnan brought back the true cinematic Bond. In the first 20 minutes of “Goldeneye,” he 1) seduces a reluctant girl, 2) wears a tux, 3) plays baccarat in a French casino, 4) says “Vodka martini, shaken, not stirred” and 5) tells a lovely enemy agent his name is “Bond. James Bond.” No pussy-footing around here.

Arguments can be made that Brosnan is the most quintessentially Bond of all the Bonds. He has the intensity of Connery and Dalton, and the light comedic touch (although drier and more muted) of Moore. He’s even given a rationale for Bond’s playboy ways. This is a Bond who tries not to love, who tries not to care, because loving and caring get in the way of work. “How can you be so cold?” Natalya Simonova asks him in “Goldeneye.” “It’s what keeps me alive,” he responds, almost helplessly. 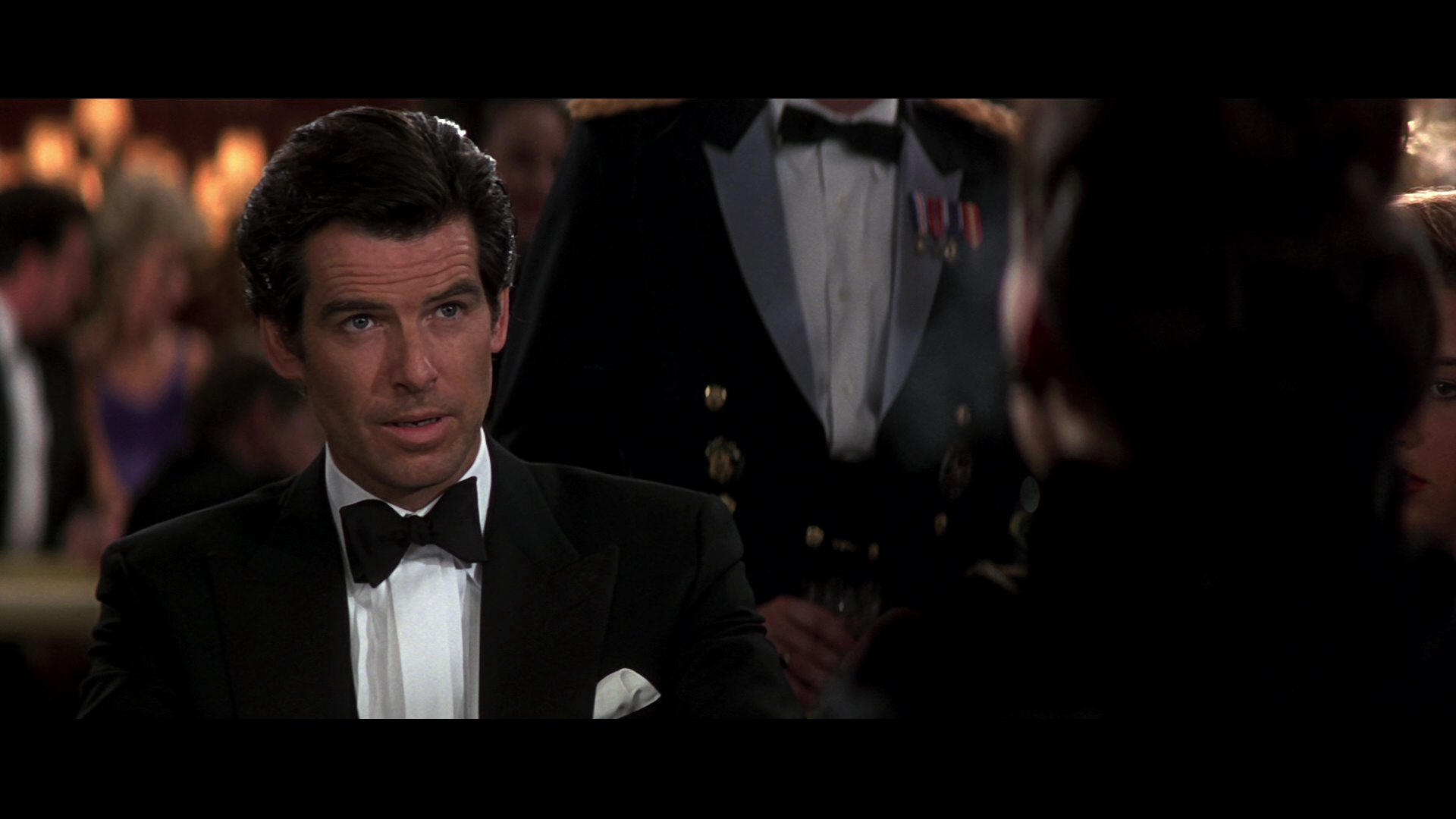 Daniel Craig
With “Casino Royale,” they’ve bitch-slapped the series. Bond, originally borne of WWII, and long steeped in the Cold War, is here remade as a post-9/11 secret agent who never knew the Cold War. Craig's Bond is physical and relentless. He bulldozes past everything. Sometimes literally. In Craig, the series has something it hasn’t had since Connery: a Bond believable as both roughneck and sophisticate. He doesn’t quite have the “wicked twinkle” that Honor Blackman attributed to Connery, but he does give good smoulder.

“Casino Royale” isn’t just grittier and bloodier than previous Bond movies; it’s deeper. All of those elements lampooned in “Austin Powers” (“All right guard, begin the unnecessarily slow-moving dipping mechanism”) are gone. It’s an origin movie, and there’s small pleasures when familiar elements are introduced: Oh, so that’s why the Aston-Martin. Ah, so that’s why the vodka martini. These small pleasures, coupled with the new-found grittiness, actually make the movie feel like the reality upon which all of those other, more cartoonish Bond movies are based. It feels like they took the adventures of this guy, the Craig Bond, and gave us those crazy Connery, Lazenby, Moore, Dalton and Brosnan flicks. 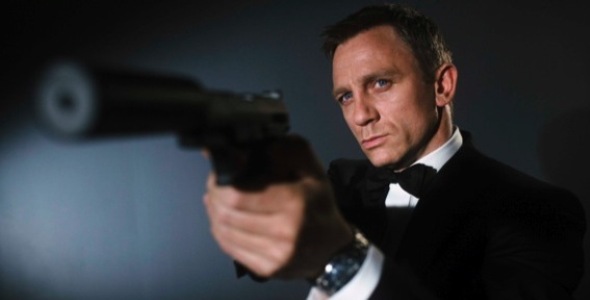 All of the above was taken from “Buying Bonds: a Cinematic History of James Bond, 007,” which I wrote for MSNBC in 2006.