The Joy of Mere Words

I often re-read George Orwell's essay, “Why I Write,” because it's short, and good, and when I need a reminder now and again. When I need bucking up.

When I was about sixteen I suddenly discovered the joy of mere words, i.e., the sounds and associations of words. The lines from Paradise Lost—

which do not now seem to me so very wonderful, sent shivers down my backbone; and the spelling “hee” for “he” was an added pleasure. 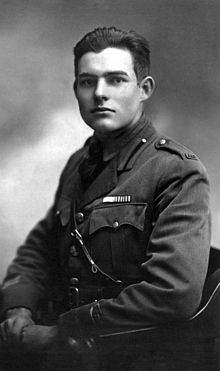 For me it was later, when I was about 19, and taking a freshman literature course at the University of Minnesota. One of the books on the syllabus was Ernest Hemingway's “In Our Time,” and one of the stories in that collection was “Soldier's Home,” about a young man, Krebs, coming back from the Great War. This is the second paragraph:

There is a picture which shows him on the Rhine with two German girls and another corporal. Krebs and the corporal look too big for their uniforms. The German girls are not beautiful. The Rhine does not show in the picture.

That seemed wholly perfect to me in a way that no paragraph ever had. Hemingway gives us an image, which, because we're romantic fools, can be romanticized; then, with the next three sentences, he takes away all romantic notions. Some part of me still thinks “The Rhine does not show in the picture” is the greatest sentence ever written in the English language.

I stared at the paragraph after I'd read it until tears came to my eyes; then I took it downstairs to share with my father. Because the joy of mere words needs to be shared.

What about you? When did you first discover the joy of mere words?