The Disappearing Art of the Steal 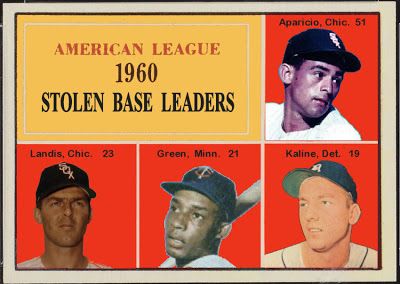 Luis Aparicio was the only player in the 1950s to have a 50+ stolen-base season.

Over the weekend I got lost in baseball stats, as I often do, and this time around it was single-season stolen base totals.

I'd always heard that once Jackie Robinson broke the color barrier, he changed the staid way of baseball—going base to base, being risk averse—and made everything jazzier and thrilling. Apparently not. Or at least not in the numbers. The '50s were our most stolen-base-less decade.

Some good trivia questions come to mind from this mix.

But the most startling bit of trivia for me is the stolen base champ of the 1930s: Ben Chapman. That's the guy in this clip. Not Jackie or Eddie Stanky. The other guy:

Believe it or not, he had more stolen bases in his career than Jackie, too: 287. Who knew?