On movie comedies: “Most comedies aren’t really movies – they’re just vehicles for the funny person that’s starring in them. No one cares where the story’s going, and if it doesn’t work, they’ll just throw in another set piece. But with 2 Days, the jokes come out of the drama. Woody doesn’t make comedies – he makes sad dramas with jokes.”

On Scott Rudin, Rock's “Top Five” producer, whose Sony-hack emails included jokes about Pres. Obama's watching typically black films such as “The Butler” and “12 Years a Slave”: “He had my back the whole time so I was able to go into a bubble and write the movie I wanted without dealing with anyone else. Scott Rudin's not racist. Scott Rudin hates EVERYBODY.”

On Bill Cosby: “I haven't talked to him in a long time. The whole thing is just sad. What can you say? I'm not gonna defend him and I'm not go Judd [Apatow] on him. You do still have to wait, he hasn't been convicted. But it's sad.”

On being black while driving: “I've always been stopped by the cops. Cops stop black guys who drive nice cars.”

On Pres. Obama: “Oh yeah, he's been good. Great, even. He wasn't going to solve America, but the country was off the rails and he was like Alec Baldwin in Glengarry Glen Ross, you know? He really sorted shit out.”

-- from Chris Rock's interview with Hadley Freeman in The Guardian. 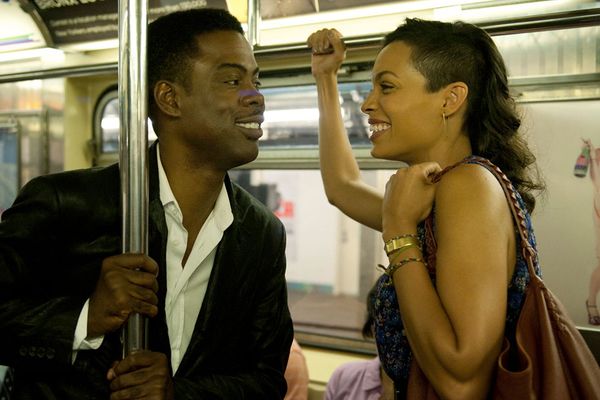 Really just another excuse to upload another photo of Rosario Dawson.