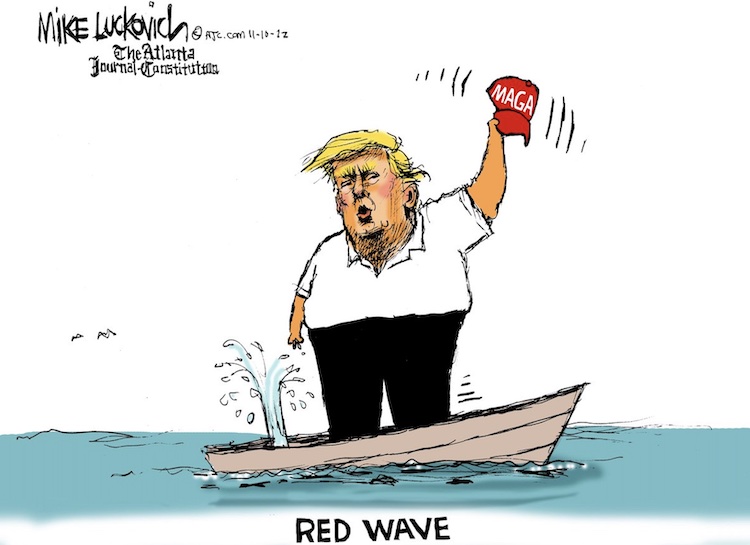 James Fallow in his substack says pretty much what I think of political prognostication—just better. Certainly more even-handed. Nary a swear word in the bunch.

He's taking the political press to task, particularly The New York Times, for its awful pre-midterm coverage that presaged doom for the Democrats. He also highlights the Times' bias in these matters.

Midterms tend to go for the party not in power. “Every first-term president since World War II (except one) has suffered midterm election losses,” Fallows writes. “The average loss has been around 30 House seats.” Then he crunches the numbers for those House races. Reminder, this is just for first-term presidents:

I'd forgotten how bad 2010 was—if I ever knew—but chalk it up to right-wing talk radio, and Fox News, and the everpresent fear of a black planet. Plus liberal complacency—mine included.

The point is, first-term midterm losses are all but inevitable. But in 2018, with Trump in office, what was the Times headline?

EDGE IN POLLS MIGHT NOT TIP HOUSE SCALES: OUTCOME HINGES ON A HANDFUL OF TOSSUPS

A bit of a shrug there. It's the Times with their hands up: Who knows?

And their 2022 headlines with Biden in office? For some reason, the shrug is gone.

MIDTERMS SPUR A RUSH OF ANGST AND CONFIDENCE: G.O.P. SHOWS OPTIMISM AS DEMOCRATS BRACE FOR LOSSES

I've long been against news prognostication anyway. The news is what's been, not what might be, and what's been is tough enough without muddying the waters. But if you're going to do it, at least try to be even-handed about it. And if you fuck up—in not being even-handed, and in not being accurate—how about a mea culpa? Or a nostra culpa? From the Times so far, crickets.

I had no idea how the midterms would turn out, by the way. The Sunday before, we were in the apartment of Patricia's friend Peter Goldman, who once covered national politics for Newsweek, and I said that outright. I had a better sense of 2016, 2020, even 2018. For this year, I just didn't know what forces would matter more: the post-Dobbs, pro-democracy voice or the usual midterm “I don't like how things are so whatever” voice. Peter was also unsure. We both kind of shrugged. If only the Times had done that.