P and I, with our friend Ward, went to a friend's place along the Columbia river on Friday, stayed over, hiked, drove back Saturday.

On the way down, on I-5 near Chehalis, Wash., we saw a tattered Uncle Sam sign with these words spelled out:

VOTE FOR THE AMERICAN

On the way back it read:

WHY IS OBAMA SUPPRESSING THE MILITARY VOTE?

It's a well-known billboard, started by a farmer named Alfred Hamilton, who died in 2004. The messages keep going up even as they eminate from an image that grows ever-more faded. They're the usual loony paranoid crap. They're the usual, accuse-the-Dems-of-what-the-GOP-is-doing crap. Because voter suppression? Ain't nothing but a GOP thang.

Of course, now Romney is doing his version of the first sign mentioned above. It's his 1,001st sign of desperation. 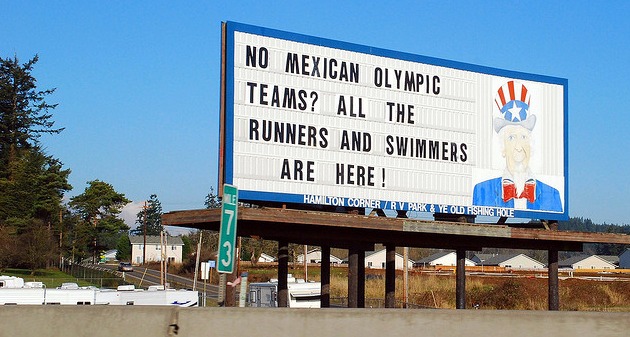