Not a comprehensive study, by the way, just the ones I had lying around. I basically took the screenshots when I: 1) noticed, 2) cared enough/was incensed enough, and 3) had the time. But there is a theme. 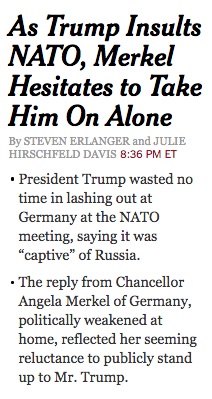 It's the “Trump says” theme. He says North Korea is no longer a nuke threat, Germany is a captive of Russia, and, maybe most absurdly, he “laid down the law,” when at best he laid it aside. He threw it away. He stomped on it without even knowing or caring he was stomping on it.

Why is it a problem to simply report what a powerful person said? Here. From “Ike and McCarthy: Dwight Eisenhower's Secret Campaign against Joseph McCarthy” by David A. Nichols:

Sensing the chance to gain more headlines, [Joseph] McCarthy terminated his honeymoon and rushed back to take charge of the Monmouth investigation. Once back, he rolled out sensational charges every day. He was free to emerge from closed-door hearings and tell the press anything he wished, accurate or not, knowing that reporters would report whatever he said.

One hopes that in 2019 The New York Times and other responsible media outlets will try to avoid this construction as much as possible.