Jon Stewart got teased by Jennifer Lawrence, and then the usual online sources, for his lack of preparation during his interview with her last week. She was promoting “The Hunger Games: Catching Fire,” which apparently didn't need much promoting (fourth-best opening weekend ever), but he barely asked any questions about the movie or her character, Katniss Everdeen, or about any future movies she might be in. (Gary Ross is remaking “East of Eden”????) He just showed a picture of a young Helen Mirren and said, “Doesn't that look like you?” Her response? “You are so weird.”

Maybe he didn't think you could ask interesting questions about “The Hunger Games.” But you can. Among them: 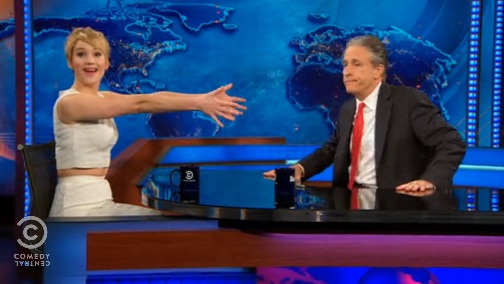