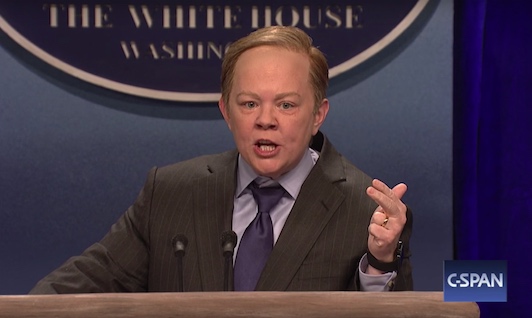 Spicer, as we'll always remember him.

Spicer began his tenure as press secretary with a bizarre rant about how Trump's Inauguration audience “was the largest audience to ever witness an Inauguration, period.” (It wasn't.) For someone who was never fully inside the Trump circle of trust, the performance had the ring of an eager gang initiate committing a crime to please the boss. ...

Spicer defended Trump's lie about how there were three million fraudulent votes in the 2016 election. He spent weeks using shifting stories to defend Trump's lie about President Barack Obama wiretapping Trump Tower. In trying to explain the urgency of the attack on Syria, Spicer explained, “You had someone as despicable as Hitler, who didn't even sink to using chemical weapons.”

Last week, he lied about the nature of the meeting at Trump Tower in June, 2016, between senior Trump-campaign officials and several people claiming to have information about Hillary Clinton from the Russian government. “There was nothing, as far as we know, that would lead anyone to believe that there was anything except for discussion about adoption,” Spicer claimed, bizarrely, because Donald Trump, Jr., had already admitted that the meeting was about Russian dirt on Clinton. On March 10th, Spicer came to the lectern wearing an upside-down American flag, which is a signal of dire distress.

The piece is called “Sean Spicer Will Be Remembered for His Lies.” It doesn't pull punches.