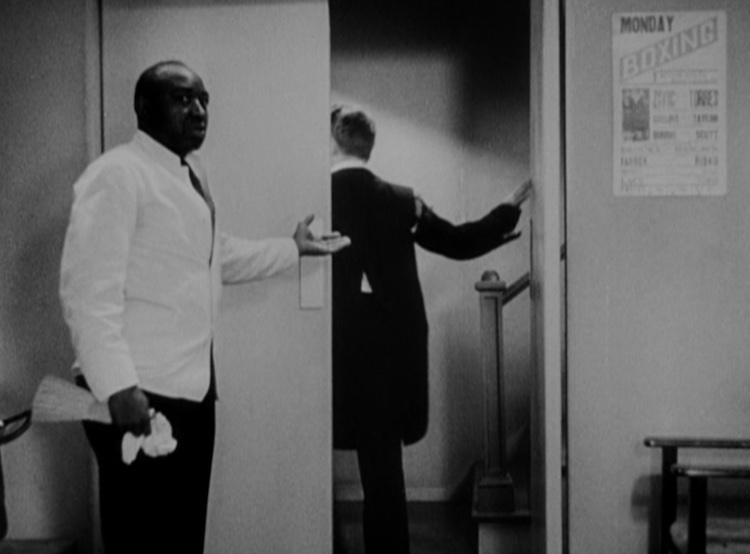 The above screenshot is from Warner Bros.' 1934 actioner “Here Comes the Navy,” the first pairing of James Cagney and Pat O'Brien, and it seems to show bathroom attendant Sam McDaniel, brother of future Oscar-winner Hattie, presenting a man (Cagney, playing Chesty O'Connor) leaving the restroom. But that's not what he's doing. McDaniel is actually breaking the fourth wall.

Cagney's character is a riveter in, I would guess, Bremerton, Wash., who gets into it with Pat O'Brien's Navy man. And at a dance, which Chesty expects to win, they fight in the alley to a standstill—until Chesty's girl calls him, he turns his head, and O'Brien clocks him. Then O'Brien wins the dance and steals the girl. Chesty, meanwhile, winds up in this restroom, where he's awakened via Black Narcissus, a perfume, then consoled, cleaned up as well as possible, and, as he's sent on his way, the man doing all this, McDaniel, holds out an open palm for a tip. Which is completely ignored. It's not even seen. It's not even a concept. So he turns helplessly toward the camera as if to say, “You see this shit?”

Anyway, it made me laugh.

I don't know if much has been written about Sam McDaniel, other than being Hattie's brother, but according to IMDb he appeared in 223 movies and TV shows, 179 of which are uncredited. Five of the uncrediteds were Cagney pics: