Imagine if the Houston Astros hadn't done its job, we'd be getting Yankees vs. Red Sox in the ALCS again. Lord.

Last night the Cleveland Indians didn't do its job and so “for the first time since 2012” (as SI intoned on Twitter), the New York Yankees are going to the ALCS. Yeah, that five-year-long wandering in the wilderness they went through; I don't know how their fans stuck it out. 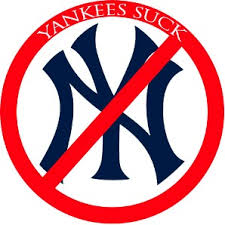 Overall, it will be the Yankees' eighth ALCS this century. Since 2000, we‘ve had 18 LCSes and the Yankees have been in eight of them. The Indians remain stuck on three. Scratch that: two. This will be Houston’s third LCS this century, and its first in the American League. The team with the most is the Cardinals, who have nine.

But to Yankee fans, those aren't the numbers that matter. The numbers that matter are 40 and 27. As in pennants and rings. They‘ve been stuck on those since 2009 and want to move on. They want to add to them. Continually. Ad nauseum. And in case you don’t know, the team with the most rings after the Yankees is the Cardinals, who have ... 11. The team with the most pennants after the Yankees is the Giants, who have ... 20. So no one's close. The Yankees have most and want more.

Last night, watching all of this at the QL, our local bar, with too much drink in me and surrounded by too few people who cared about the game, I thought of the famous slogan from the early 1960s: “Rooting for the New York Yankees is like rooting for U.S. Steel.” Meaning a powerful, faceless, pointless entity. A machine that kept producing this product on an assembly line. Rah.

I thought of the update while stewing (stewed) at the QL: Rooting for the New York Yankees is like rooting for white people. When I got home I plastered it all over Twitter. I interrupted Yankees fans online celebrations with it. Many didn't get the reference, of course, and thought to educate me by bringing up all the non-white players on the team.

In the remaining LDS, I'm rooting for the Nats (with zero LCS appearances and zero pennants) over the Cubs (last year's feel-good story). Mostly, though, I'm just rooting for Houston. To end it already.