It’s 1978 and I’m flipping between the five channels our TV offers — and doing it the old-fashioned way, without a remote — when I come across a scene from Magic, starring Anthony Hopkins and Ann-Margret, a movie that has just been released in theaters. I can’t believe my luck. Then two guys come on and talk about it. There are scenes from other movies and the same two guys talk about them, too. One guy is tall, thin and bald, the other is fat, with big glasses and a mop of hair swooping over his forehead. The whole thing feels like it’s a one-off or a mistake and I assume it’ll end any second. How can they show scenes from new movies…on TV? That isn’t allowed, is it?

The show was, of course, PBS’s “Sneak Previews,” and three of the reasons it was unique — it was 1) an entertainment show, 2) offering clips of new movies, 3) while two guys argued — have become, in the three decades since, so ubiquitous as to be part of the downfall of our culture. But even after Roger Ebert and Gene Siskel (the fat guy and the bald dude, respectively) left PBS for their syndicated shows (“& the Movies,” “At the Movies”), and even after they were copied to death, it was always worthwhile to follow them to whatever channel in whatever market in whatever time-slot they wound up in. 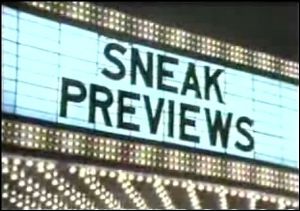 They weren’t pretty. They didn’t dress well. Obviously no one told them to smile at the camera. All of these things worked in their favor. They were about as non-corporate as you could get. They snuck onto television the way Ed Sullivan snuck on. The people following in their wake — Jeffrey Lyons, Neal Gabler, Michael Medved, et al. — all felt a little less genuine.

Siskel and Ebert loved movies. You could feel it through the TV screen. They argued all the time, usually intelligently, always forcefully, sometimes bitterly. One of the dumbest things people say about movies today — “Hey, it’s just a movie!” — would never have occurred to them because movies mattered too much to them. I remember a special episode they did in the late ‘70s slamming all of the gratuitous violence against women in movies. They chastised Hollywood for all the tired sequels. They encouraged the studios to take the right path. Insert your own joke here.

I always thought I agreed with Roger more than Gene — that Gene seem bitter in the 1980s — but looking over old clips, on both YouTube and At the Movies, I wonder about this. Gene seems more amused by their fighting, while Roger sits still and angry. And was it my imagination or did Roger give a free pass to too many films starring or directed by African Americans? I mean, She Hate Me? Roger, Roger, Roger.

It's gone now. Gene died in 1999, while Roger, battling thyroid cancer, has been more off than on since 2002, but the official notice came last week when Disney announced the replacements for Gene’s and Roger’s replacements. Both are young, both are named Ben, both have cinematic lineages. Neither snuck in.

It’s just time passing, of course, that’s what’s truly sad about it, but Roger has a nice farewell here. I wish I could offer him a better tribute than this. But I will remember to save him the aisle seat.