What can you say about an 84-year-old movie theater that dies? That it was cold and rundown? That it loved documentaries and foreign films? And “Transformers”? And me.

I first heard the prognosis a week ago when Patricia and I were having dinner at the home of Michael Upchurch and John Hartl, and John, long-time movie critic for The Seattle Times, dropped the bomb. I can't say I was suprised. Here's what I wrote in May 2009:

The Uptown was renovated in the early 1990s but that’s all I have on its history. It’s part of the AMC chain, but it’s an odd link in that chain. It usually plays small, independent films, or mid-range films, but occasionally it’ll show a big feature on opening weekend—as with “Angels & Demons.“ The place never seems crowded. Feels like it's dying. The 4:05, Friday showing of “Angels & Demons” had fewer than 16 people in an auditorium built for...300? Which doesn't bode well for either “A&D”’s box office or Uptown Cinema. 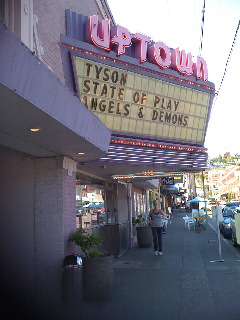 How AMC handled ”Aftershock“ is part of the problem, John thought. They didn't advertise it at all. At all. No ads in the print version of The Seattle Times. ”Aftershock“ was a movie that set the box-office record in China this year and no one in Seattle knew it was playing. I only knew it was playing because I'd seen ”A Film Unfinished“ a few days before, me and the other guy, and they'd played the trailer for ”Aftershock“ beforehand, and I thought, ”That looks interesting.“ Then that Friday I walked past the theater—I work a block away—and saw it on the marquee.

A block away. I'm gonna miss that. Ever since I moved back to Seattle in September 2007 and began working in lower Queen Anne, I've had that opportunity, that convenience. The Uptown is where I was suprised by ”The King of Kong,“ charmed by ”Hors de Prix,“ disappointed in ”Angels & Demons,“ disgusted by the overwhelming stupidity of ”Transformers 2,“ and moved by ”Bright Star“ and ”A Film Unfinished.“ It's where I saw one of the first movies I reviewed for The Seattle Times, ”Titan A.E.,“ in 2000. It's where I attended special screenings for ”What Lies Beneath“ and ”Meet the Parents.“ Forgettable movies, but for some reason I remember seeing them at the Uptown.

There were problems. The sound wasn't always great, the films sometimes seemed dim, the theater often felt cold, the popcorn—when I bought it—tasted day-old. None of that was the Uptown's fault. It only closed because people stopped caring: AMC and moviegoers.

SIFFblog has a nice historical rundown here. The theater opened on May 25, 1926, showing ”The Sea Beast,“ an adaptation of ”Moby Dick" starring John Barrymore. The Seattle Star  (R.I.P.) celebrated its grand opening:

The newest styles in projection machines of the reflector type are installed to prevent eye strain. A new Wurlitzer is to be put in, and Carl Weber's orchestra is playing. Dan Gipple is the manager.

There was a record-breaking crowd that night. 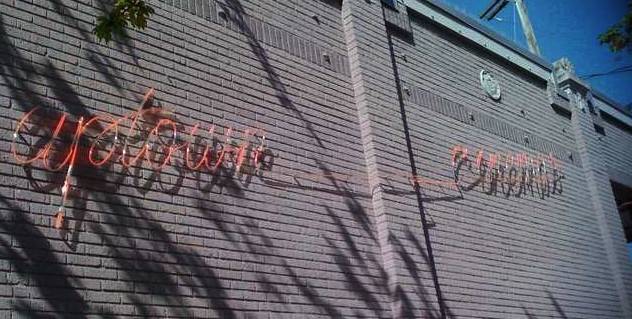