The kids may be alright but the adults sure are screwed up.

One gets that feeling five minutes into the movie. The teenage boy, Laser (Josh Hutcherson), may hang out with a jerky friend, and the teenaged girl, Joni (Mia Wasikowska), may be too timid to move beyond Scrabble with the boy she likes, but at least there’s something open-ended and possible about their personalities. At least they don’t have 20 years of a relationship grinding and truncating each personality into a parody of itself. At least they didn’t name one of their kids ‘Laser.’ 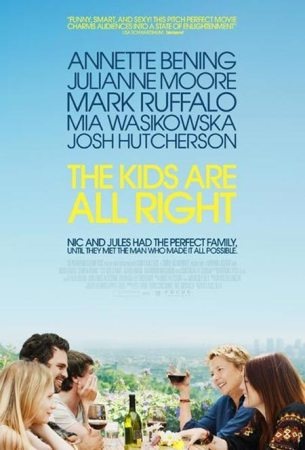 The couple in question is a lesbian couple but it may as well not be. Nic (Annette Bening) is the dominant, male figure who returns home from an important job (she’s a doctor), tosses off an exasperated line about the difficulty and importance of that job (“17 thyroids today”), then minimizes wifey’s contributions. She dotes on her baby girl, now 18. She acknowledges the girl is 18 but continues with the baby talk. She wears sleeveless T-shirts. She drinks too much.

Jules (Julianne Moore) is the passive-aggressive, female figure who allows herself to be minimized, then resents that minimization. She wants to do something, start a landscaping business, but doesn’t know where to begin. To be honest, she’s afraid to start. Plus she gets no support in the matter. She’s a bit loopy in a west-coast way, and knows it, and resents it. During sex, she goes down on the dominant figure.

Is this an inevitability in relationships—that we grind each other into parodies of ourselves? I don’t know, but the beginning of the movie felt false to me in the way that first episodes of TV shows, where the characters are more broadly drawn than what they become, feel false. I would’ve appreciated a finer touch here.

Each of the two women gave birth to one child—Nic to Joni, Jules to Laser—and now that Joni’s 18, and at the urging of Laser, who is probably craving a male figure in his life, they search out the sperm donor, from back in ’92 or ’95, who was anonymous. Considering all of the messy possibilities they hit the jackpot. Paul (Mark Ruffalo) is a not-bad-looking, scruffy, laid-back dude who runs a restaurant using organic, locally-produced food. He rides a motorcycle. He exudes interest and passive sexuality.

The initial meeting between kids and donor is clumsy, as it should be, and Laser comes out of it disappointed, but Joni is jazzed and wants to see where it leads. Nic and Jules, of course, are horrified. Nic, the dominant figure in the household, is particularly upset that another bull is sniffing around outside, but she lets him in to diminish him. “Let’s just kill him with kindness and put it to bed,” she says. Except she’s the one who gets diminished. She can’t hold her wine and comes off as small and combative, while he comes off as mellow and reasonable. He gives Jules both encouragement for her landscaping business and her first job: fixing up his backyard. There, they bond over the word “fecund,” while she apologizes for all the double-takes because “I keep seeing my kids’ expressions in your face”—a fascinating area of inquiry that is all but forgotten when the two, more alike than not, fall into bed together.

At first it seems a one-shot. Then it happens again and again. Meanwhile, Paul is also bonding with both Joni, who gets to ride on the back of his motorcycle from the organic farm, and Laser, to whom he gives good advice about his jerky friend. Nic? Nic is working. She’s being nudged out of the picture.

The movie lost me when Paul gets serious about Jules. Yes, an argument can be made that while Paul’s personality is essentially unserious the kids have made him more serious, so now he’s ready to get serious. But I still didn’t buy it. I didn’t buy it particularly because at that point he was also sleeping with the most beautiful woman in the world, Tanya (Yaya DeCosta), the hostess of his place. DeCosta is a fine actress but it was tough believing that someone that beautiful even exists, let alone that she’s schtupping Mark Ruffalo, let alone that he then throws her over for Julianne Moore. (No offense to Julianne Moore.) For me, it was one “let alone” too many.

Tanya, by the way, gets off the best line in the movie, which is an early candidate for best line of the year. When Brooke (Rebecca Lawrence), the organic farmer, flirting with Paul with a basket of fruit, says “I thought you should have first taste,” Tanya, after Brooke leaves, mimics her, “I thought you should have first taste...” and then, in her own voice and under her breath, “...of my pussy.” I roared.

There’s been a lot of buzz this year from the filmfest circuit on “The Kids Are All Right,” and I liked it well enough but wasn’t blown away. It’s partly that broadly-drawn beginning. It’s partly the sense of privilege that permeates these characters in their busy, eating-outdoors lives. Back in the early 1990s, Steve Martin’s “L.A. Story” tried to be a kind of L.A. version of Woody Allen’s New York, but “Kids,” from writer-director Lisa Cholodenko (“Laurel Canyon”), pulls it off better than “Story” ever did—and that’s not wholly a compliment. Again, it’s the sense of privilege. These are people who have the time to be neurotic.

That said, Bening is a wonder and deserves another Oscar nomination, and possibly, finally, the statuette itself. Hutcherson sure has grown up fast (was “Bridge to Terabithia” really three and a half years ago?), while Wasikowska has something like true beauty about her.

The movie has buzz because of its unconventionality—a lesbian couple! looking their age!—but that unconventionality is wrapped in a conventional story and lesson. Family is hard but sacrosanct, and woe to he who violates that sanctity. Is the usual sanctity-of-marriage crowd objecting to this movie? Ironic if they are. It’s such a pro-family movie. In its quiet, forgiving end, in which the family is fortified against outsiders like Paul, I, identifying with Paul, the childless fortysomething, experienced regret at not knowing that feeling; at not having started my own family.

The kids are alright; the adults still need work.