As “Robin and Marian” opens we see two medieval knights digging in the French sand. “For treasure?” we wonder. “Oh, to get a large stone. Oh, for a catapult. Oh, to shoot at yon castle.” Which they do—to little effect. The stone crashes impotently halfway up the wall and Robin (Sean Connery), on horseback beside Little John (Nicol Williamson), sighs deeply. A minute in, and everything already feels purposeless and dissipated.

If “Robin and Marian” is the least traditional of the Robin Hood feature films, it has less to do with being set 20 years after the famed 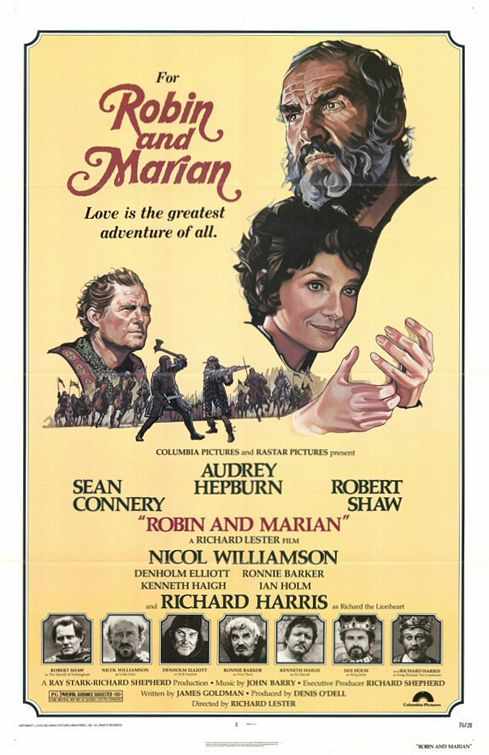 Sherwood-Forest events than with being written and directed in the 1970s. That was a dispiriting time for all of us: post-1968, post-Vietnam, post-Watergate. Heroes weren’t believe in and authority was openly mocked. In both the 1938 “Adventures of Robin Hood” and the 1991 “Robin Hood: Prince of Thieves,” Richard the Lionheart makes an appearance at the end and is venerated. He stands tall, acts noble, everyone bows. (In the ’91 version, he’s even played by Connery.) Here he shows up at the beginning—played with glorious panache by Richard Harris—and he’s as mad as a hatter. The absent lord of the semi-besieged castle has a three-foot gold statue hidden somewhere, but the one-eyed man minding the store, and protecting the women and children within, yells out that there is no gold statue. It’s stone. That’s enough for Robin. He’s about to leave when Richard comes charging up on his horse and demands the castle be taken. They argue:

Robin: Your statue is a rock.
Richard: I want it done.
Robin: There is no treasure.
Richard: Do it.
Robin: There are no soldiers in there, just children and a mad old man.
Richard: And what is that to me?

So the castle is taken and burned. Afterwards Richard's foot pokes a three-foot statue. “So it was stone,” he says with mild interest, as one hears, in the background, the cries of dying women and children. But the one-eyed man lives. “I liked his eye,” Richard says, as if recalling a striking painting he saw at a gallery. A scene later, after some drunkenness, Richard’s dead, and Robin and John, with no one to follow, not even a crazy king to follow, head back to England. 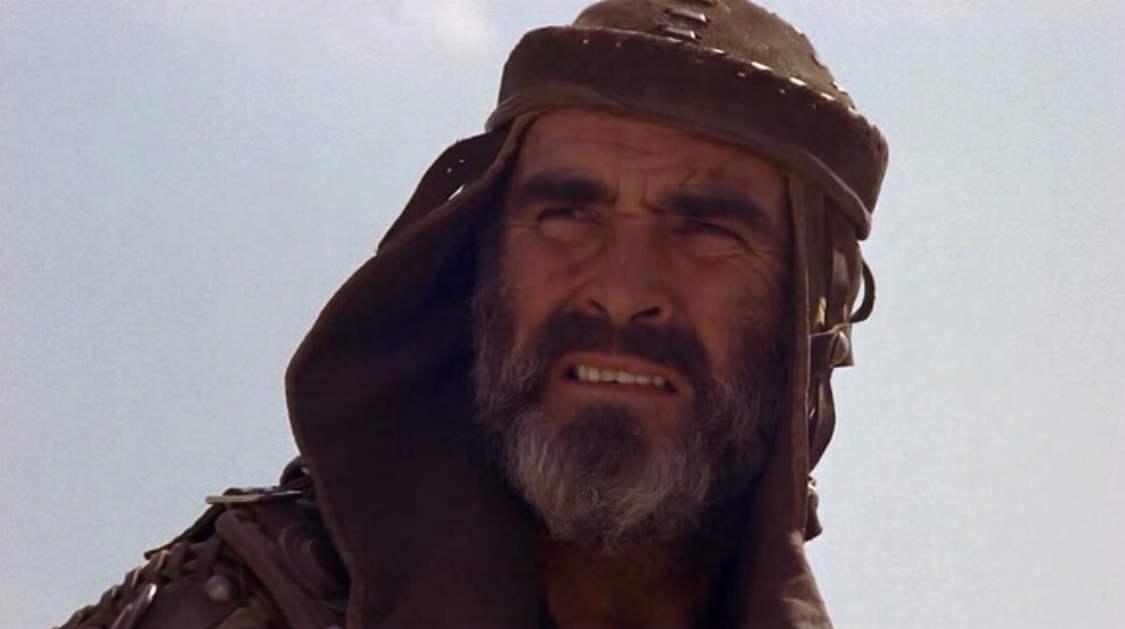 The things he carries.

What becomes a legend most? At this point, Robin doesn’t even know he is a legend. He and John return to Sherwood the way one might return to a high school haunt. Isn’t that the place where...? Hey, remember this? They run into Tuck (Ronnie Barker) and Will (Denholm Elliott) and it’s the latter who tells him he’s revered, that there are ballads sung about him:

“They’ve turned us into heroes, Johnny,” Robin says to Little John, amused. Then this key bit of dialogue:

Will: Everywhere we go, they want to hear the things that you did.
Robin: We didn’t do them!
Will: (laughs) I know that.

The heroes aren’t heroes. At the same time, we’re never really told what they never did. Rob from the rich and give to the poor? Split an arrow at an archery contest? Rescue Maid Marian from Sir Guy of Gisbourne?

It’s apparent, though, that they did live in Sherwood Forest and fight, in guerilla fashion, the Sheriff of Nottingham (Robert Shaw), who’s still in power. Marian (Audrey Hepburn), meanwhile, has become a nun (“Not my Marian,” Robin says, shocked), and the day they visit her at Kirkley Abbey is, nice coincidence, the day the Sheriff and his men come riding by to arrest her for maintaining allegiance to the Pope rather than King John.

The Sheriff of Nottingham has been portrayed a thousand different ways. In the Fairbanks silent version, he’s an afterthought; in the Flynn Technicolor version a buffoon. Alan Rickman played him with over-the-top malevolence in the ’91 Costner version, where he’s the chief villain with an eye on the throne. He’s none of the above here. He’s not even a villain, really. He’s had 20 years to figure out what he did wrong and it’s made him patient and crafty. One could even call him wise. He’s not only the smartest man onscreen but possibly its most interesting. When Robin and John try to sneak into Nottingham he sees through their disguise from the castle above. “Ah Robin,” he says. “Three horses but two to push? I almost feel sorry.” When his headstrong lieutenant demands the right to pursue Robin, and then insults the Sheriff—claiming he’ll succeed where the Sheriff failed—there’s no anger in his response. “Raise the gates,” he says wearily. He knows the lieutenant will fail. He also knows enough not to pursue Robin into Sherwood. Even after King John gives the headstrong lieutenant 100 soldiers to take Robin, the Sheriff merely camps them outside Sherwood. And waits. And waits. He knows he’s the bird hopping around before the cat. Sooner or later the cat will pounce.

But it’s called “Robin and Marian,” that’s the key relationship, and it’s in their conversations that screenwriter James Goldman, brother of William and author of “The Lion in Winter,” has fun. “What are you doing in that costume?” he says when he first sees her in nun’s habit. “Living in it,” she responds. Seeing the austerity of her quarters, he says, “I thought I knew you. What’s happened to you?” “Good things,” she responds. She’s haughty. She’d given up on Robin, and was ready to give herself up to the Sheriff, too. In fact Robin has to knock her out to take her away, and the shock is less seeing Robin slug Marian than seeing Sean Connery slug Audrey Hepburn. That’s like coldcocking a fawn. Other crimes seem minor in comparison.

Marian’s haughtiness, of course, is poor cover for 20 years of lost love and pain, which she eventually confesses. There are scars on her wrists from when she tried to kill herself. “You never wrote,” she says accusingly. “I don’t know how,” he answers honestly. 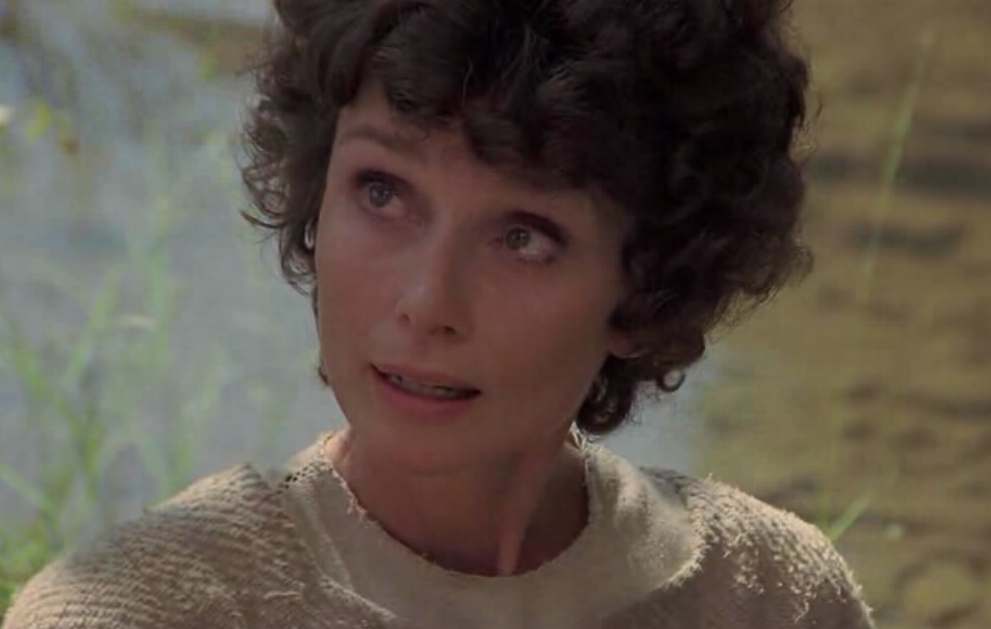 The things she carries.

He has scars, too, from his countless battles, which she sees when she takes off his shirt. “You had the sweetest body when you left,” she says sadly. “And you were mine.” But these scars are nothing compared to his spiritual scars. The Crusades were celebrated in the Fairbanks version, and glossed over—in an isolationist fashion—in the Flynn version. Here they’re horrific. When she asks if he’s sick of fighting and death, he tells her a story:

On the 12th of July, 1191, the mighty fortress of Acre fell to Richard. His one great victory in the whole campaign. He was sick in bed and never struck a blow. On the 20th of August, John and I were standing on a plain outside the city, watching, while every Muslim left alive was marched out in chains. King Richard spared the richest for ransoming, took the strong for slaves, and he took the children, all the children, and had them chopped apart. When that was done he had the mothers killed. When they were all dead, 3,000 bodies on the plain, he had them all opened up, so their guts could be explored for gold and precious stones. Our churchmen on the scene—and there were many—took it for a triumph. One bishop put on his mitre and led us all in prayer. (Pause) And you ask me if I’m sick of it.

But he’s not sick of it. That’s what Marian suspects and that’s what the Sheriff knows. There’s a great scene where Robin and John rescue several nuns from Nottingham Castle. It’s great because it’s not. Robin Hood is now an old man, and, rather than bouncing and leaping, he grimaces and pants. He moves in slow-motion. Part of the point of “Robin and Marian” is to explore the story after the story. What happens after the happily-ever-after? History doesn’t have to be a tragedy to be repeated as farce.

At times, the film, directed by Richard Lester of “A Hard Day’s Night” and “Help!” fame, is almost too farcical, as if it were dipping its toe into absurdist “Monty Python” territory. This absurd tone clashes with the bittersweetness of the overall tale. Robin keeps doing what he’s doing because he can’t do anything else. When the Sheriff succeeds in drawing him out, and they duel clumsily with broadswords, they’re like two old dinosaurs. Several of the men even have to turn away—as sportswriters had to turn away from watching the great Willie Mays, in his twilight, fall down in center field trying to catch a fly ball.

The Sheriff doesn’t get Robin here. Despite the Sheriff’s craftiness, Robin still wins. But he’s wounded and Marian takes him back to the Abbey, mixes a concoction and has him drink it. It’s poison. She wants a life with him, she deserves a life with him, but she knows she won’t get it because he won’t change. “I love you more than morning prayers or peace or food to eat,” she confesses. “I love you more than God.” This is what her feistiness was hiding. Initially incensed, he comes to accept it. “I’d never have a day like this again, would I?” he says. with that Connery half-smile.

“Robin and Marian” comes close to being very, very good—the acting and dialogue in particular—but its tone is slightly off. Plus it has the worst riding music I’ve ever heard (imagine instrumental Christopher Cross, but somehow schmaltzier), and it’s a little precious with its withering-fruit symbolism. I’m also not sure if I don’t buy or merely don’t want this end, which ignores why this particular tale is bittersweet. Think of the withering fruit. We all age and wither and die, even legends. In his day Robin Hood was a great thief—robbing from the rich and giving to the poor—and he deserved to be taken by the greatest thief of all: Time. 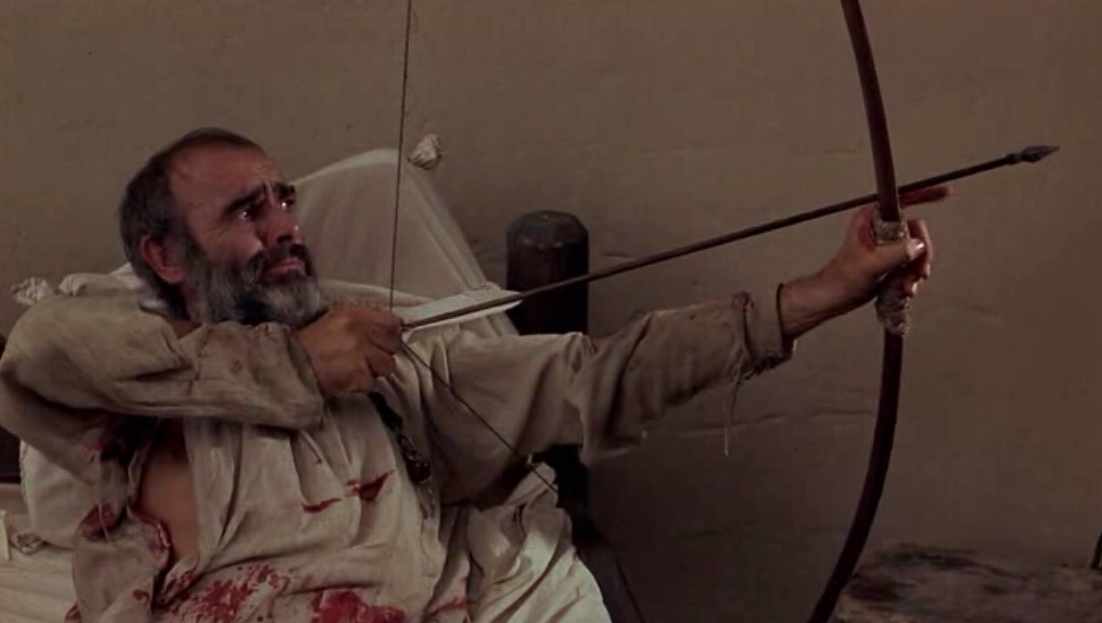