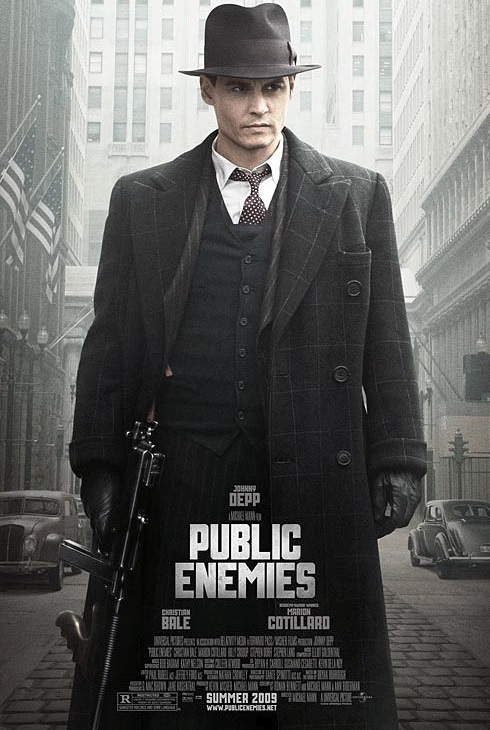 In the film’s first scene, for example, we see Dillinger (Johnny Depp) entering prison in handcuffs. Turns out he’s not being led in; he’s breaking other guys, including gang boss Walter Dietrich (James Russo), out. Mid-break, though, one gangmember gets a little too rifle-butt happy on a guard, and shots are fired alerting the other guards in the towers. Before it’s all over, Dietrich is shot, dragged by the escape car, and finally succumbs and dies. Dillinger ain’t happy. The hood that got rifle-butt happy? He doesn’t last a mile from prison. Dillinger punches his face in and kicks him out the door. The dude is basically the Waingro of the movie: The unprofessional one who alerts us to the professionalism of the others. It’s a constant Mann theme.

Depp’s Dillinger is also, like most Mann heroes, a man of few words; a man who focuses on the essential. After meeting hat-check girl Billie Frechette (Marion Cotillard) at a dinner club, we get this non sequitur:

Billie: How come you don’t know how to dance?
Dillinger: Frechette. That French?

Unfortunately, there’s also this. At a fancy restaurant, Billie feels awkward in her three-dollar dress and Dillinger looks around at the customers:

Dillinger: They’re all about where people come from. I only care about where they’re going.
Billie: Where are you going?
Dillinger: Anywhere I want.

In the theater I blanched at this conversation but in retrospect it works. Dillinger is at a high point here. He busts guys out of prison. He robs banks at will. Top of the world, ma. But tectonic plates are shifting around him. J. Edgar Hoover (Billy Crudup) is accruing power as the head of the FBI and places Melvin Pervis (Christian Bale), the man who killed Pretty Boy Floyd, at the head of a Dillinger task force in Chicago. Meanwhile, Dillinger’s sometime-ally, Al Capone’s former gang, now the National Crime Syndicate under Frank Nitti, is going corporate. They’re making money hand-over-fist, coast-to-coast, through wire-service gambling, and since they’ve paid off the cops to leave them alone, the last thing they need is the sensational bank-robbing antics of men like Dillinger attracting attention and possibly shining a spotlight on them. They make Dillinger an offer but he refuses and they cut all ties with him. Safe houses are closed off. Friends turn. This is the movie at its most intriguing. Dillinger isn’t simply a crook pursued by cops. He’s a man being squeezed by two corporate forces. He’s the last individual standing. And in this new world he finds he can’t go anywhere he wants.

The casting is intriguing. Depp, Bale and Crudup could play brothers they look so much alike. Dillinger and Purvis, in particular, are both professional men heading outfits that aren’t always professional or competent. They’re both guys doing jobs, but Dillinger is having more fun with his. Purvis, one feels, begins to lose his soul in the process. He places corporate results ahead of moral methods. He tortures out information. He’s basically us this decade. Crudup, meanwhile, still handsome, somehow suggests the fleshiness Hoover will grow into.

Depp is a revelation. I didn’t think he could do gangster but there’s always something hard and immovable in his eyes. Dillinger was supposedly one of the more graceful of bank robbers, and Depp demonstrates it, vaulting beautifully over a bank counter, machine gun in hand. I could watch “Public Enemies” again just for the dreamy, eerie scene where Dillinger is extradited back to Indiana. It feels like a mirage to me. I want to grasp at its meaning but it eludes me. Maybe its beauty is its meaning; maybe it wasn’t meant to be grasped.

Did Mann miss an opportunity by avoiding a tri-part structure and relegating Purvis and Hoover to secondary status? Is there too much a focus on Dillinger? Aspects of his story bored me. The romance. He meets her, wants her, gets her; then, of course, she worries he’ll be killed. “Dillinger: Wanted dead or dead,” one gangmember jokes, but it’s not a joke to her and she complains. But it’s a boring complaint, one we’ve heard in too many movies. It’s only in the second half of the film, when the FBI is watching her, bugging her phone using primitive phonograph technology, that this relationship becomes interesting. It’s even better when she’s caught and tortured for information. Cotillard is outstanding in these scenes.

Once Dillinger is squeezed by both the FBI and the Syndicate, he’s forced into partnership with less professional men like Baby Face Nelson, who promises big hauls and doesn’t deliver, kills unnecessarily and draws unwanted attention. The FBI closes in. More gangmembers go down. Eventually Dillinger is as alone as Frank was in “Thief.” He’s the last individual standing in a corporate world. There’s a great scene near the end when Dillinger drops off a girl downtown, then spies the Chicago Police Station across the street. He doesn’t just go into the police station, he goes into the Dillinger squad room, large, like a football field, and looks at all the photos they’ve taken, all the memorabilia they’ve gathered, all the equipment they need. To get him. Amusement shines in his eyes. The squad room seems empty, but slowly, dreamily, we realize, no, the men are just gathered at one end near a radio, listening to the ballgame. Dillinger stops, watches them, asks a question. They answer without looking up. He continues to smile. Tectonic shifts have occurred but he’s still a man who goes anywhere he wants. Even here.

I’m still gestating the film. I need to see it again. At the screening yesterday, someone brought a toddler and the kid talked through crucial scenes, distracting everyone. And since it was at a multiplex, a corporate AMC entity, there was no one there to complain to.

But I want to see it again. Maybe that’s comment enough.