More than halfway through “Observe and Report,” the new dark comedy written and directed by Jody Hill, Det. Harrison (Ray Liotta) is delivering the bad news to mall cop Ronnie Barnhardt (Seth Rogen) that, because he failed the psychological portion of the police exam — because he’s basically loons — he’s not going to become the cop he always wanted to be. Ronnie breaks down. At this point another detective, whom we’d seen entering Harrison’s closet laughing and ready to listen in on the bad news, emerges straight-faced. “I thought this was going to be funny,” he says, “but it’s actually kind of sad.” 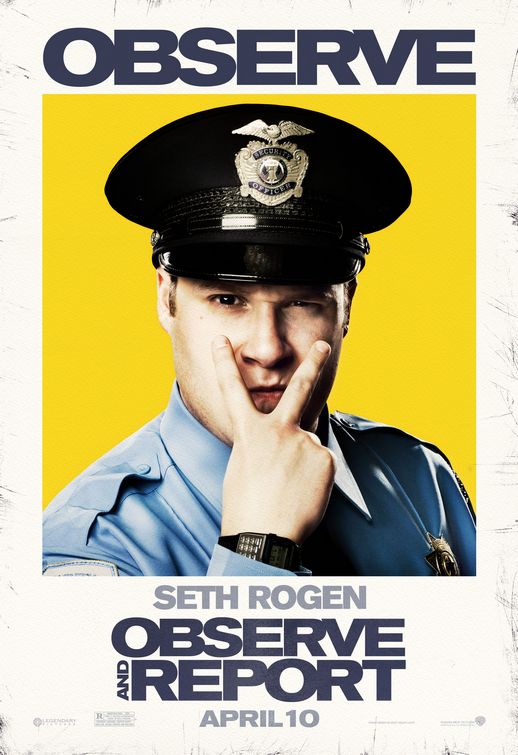 The line is almost a toe-hold for reviewers. You go in thinking “Observe and Report” is going to be funny, but it’s actually kind of sad.

I don’t even know whether I like it. It’s hard to like. Ronnie is partly sympathetic. He suffers from bipolar disorder, lives with his alcoholic mother, moons after a dim, jewelry-counter girl, Brandi (Anna Faris).

More often, though, he’s just unpleasant. He’s the kind of guy who, when others are laughing, he tries to slip, laughing, into the conversation. He — whoops! — let’s slip big-deal news in order to seem a big deal. He obviously feels small but it’s hard to care since, within his fiefdom, he’s a petty dictator. He chews out subordinates with one foot up on a chair. One of the proprietors at the mall, whom Ronnie calls Saddam, actually has a restraining order against him. When a flasher begins to stalk women at the mall, Ronnie sees it as his chance to matter, but after a night-time theft, an actual detective, Harrison, is brought in to investigate. A bigger dog has entered his yard and Ronnie spends most of his time yapping at him, screwing up his investigation, until, with one big “woof!,” Harrison lets him know just how small a dog he is.

That’s when Ronnie decides to become a cop himself and demands an impromptu ride-along with Harrison as part of his training. Fed-up, Harrison abandons him, in the most dangerous part in town, his big white tennis shoes gleaming like a beacon. Soon he’s surrounded by crack dealers and gangbangers.

In a certain sense the movie is about the distance between the lives we lead and the lives we lead in our heads, and here we think this distance is going to come crashing down on Ronnie. A gun is pulled. He goes down on his knees. He’s begging for his life. But no. It’s all a ruse to get a weapon, and, with martial-arts skill, dispatch five gangbangers. He can be as heroic as he imagines himself to be.

Which makes us wonder: So what’s the point? That an annoying, petty bully can be a hero?

And that’s exactly the point. The filmmakers have put a very unpleasant guy in the traditional action-hero role. As much as anything, the film’s a send-up of Hollywood conventions — and how these conventions screw us, the audience, up.

The tropes are all there — loner, protects the weak, goes too far and loses his badge but, with a “go after your dreams” speech from mom, still manages to bring the bad guys to justice — they’re just made small and pathetic. After Ronnie loses both the possibility of the cop’s job and his mall-cop job, the flasher, dick flapping, returns and Ronnie chases him through the mall. Just as the flasher is about to pounce on Brandi, Ronnie shoots him, wounding him. Then he hauls him through a phalanx of cops, including Det. Harrison, standing in front of the police station, where he deposits him, turns on his heels, thrusts a fist in the air, and announces, “I win!”

It’s a great moment because you know, in his head, Ronnie sees himself as Dirty Harry. A few cops even applaud him, as they would Dirty Harry in a Dirty Harry movie. But we don’t thrill in Ronnie’s victory. The filmmakers manage to keep him small and pathetic. That’s impressive. It’s rare in a film when the audience is able to see so clearly this disconnect between the life led and the life in the head.

So what’s my problem? Why aren’t I giving this movie a ringing endorsement?

I could argue the missteps — those scenes when Ronnie stops being the petty dictator and, following a subordinate, lets loose his petty anarchist — but it’s bigger than that. Ronnie may be small and pathetic but so is everyone else. You get the feeling that Jody Hill and company just don’t like people much.

Everyone’s awful: the mall customers and the mall employees. Nell, the traditional “other girl” — the sensible one who likes the protagonist, and with whom he winds up in the end — wears a purity ring. But when Ronnie asks her if she’s a virgin, she responds, “Well, technically I’m a born-again virgin.” Ick.

Everyone has this disconnect between the lives they lead and the lives they think they’re leading, and our culture widens this gap. The rap song blaring in Brandi’s car, right before she’s flashed, includes the lyrics, “I’ll show him mine if he shows me his.” Feminists are up-in-arms over the date-rape scene but they miss the point. This is part of Ronnie’s disconnect. When the flasher first shows up, Ronnie warns Brandi, who wants nothing to do with him, “Everyone thinks they’re going to be fine — until someone puts something they didn’t want in some place they didn’t want it.” Turns out he’s that guy...and he doesn’t even know it. He thinks he’s the hero when he’s really the villain.

Which, I suppose makes “Observe and Report,” for all its misanthropy, a worthy film for our time. We think we’re the hero when we’re often the villain. We think we’re ridding the world of terrorism when we’re making pyramids out of naked Iraqis.