We like the lies of Hollywood in particular. We like believing we are good, and others are bad, and we stare them down and shoot them down and ride off into the sunset. We like this narrative so much we’ve transferred it into the real world, which is complex and problematic, then we’re surprised when the narrative falls apart. Or do we simply ignore it when it falls apart? We move on to other narratives, other lies, and keep digging ourselves in deeper. It’s like our national debt but with lies. We tell one lie to make up for another to make up for another. Soon we’re steeped in it. We’re a sick country, a sick race. Are we tired of it yet? Do we want to know what’s true anymore? 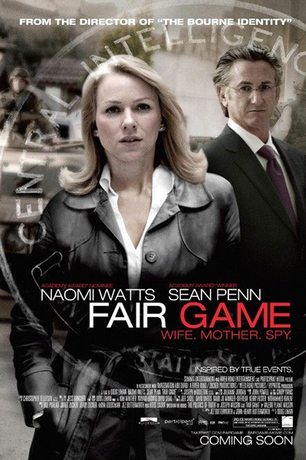 “Fair Game” is a movie about a series of lies perpetrated by the Bush administration, sometimes on itself, and certainly on us, from 2002 to 2005. They were lies with massive consequences, lies that got us into war, lies that led to the deaths of tens of thousands, maybe hundreds of thousands, maybe someone you knew. Maybe someone close to you is now dead because of what the Bush administration wanted to believe. They reconfigured the globe because of what they wanted to believe. The one time they told the truth, it was a treasonous act. But they got away with that, too, because they lied their way out of it.

My god. Can we be incensed again? Is that still possible? Let’s run through it.

We got into a war because of lies.

When a man called us on one of those lies, we lied about him. We tried to ruin his life.

When that wasn’t enough, we told the truth about his wife. She was a CIA agent and we outed her. We cast her aside. She was a good soldier, and “Support the Troops” signs were everywhere back then, but her husband was pointing out the lies in the war narrative so she had to be sacrificed to make the Joe-Wilson-is-incompetent narrative work. She was, as Karl Rove later said, fair game. To Karl Rove, we're all fair game.

The movie should work. It should work the way that “All the President’s Men” works and “The Insider” works. Two people, attempting to uncover the truth, take on a vast, powerful entity intent on continuing the lie. It’s a classic underdog narrative, the kind Hollywood loves producing. And it’s true.

But it doesn’t quite work here, does it? “Fair Game” is a good movie, a necessary movie, a movie you want more people to watch. But Doug Liman doesn’t make it sing the way Alan J. Pakula made “All the President’s Men” sing and the way Michael Mann made “The Insider” sing. Why?

Is it because he shows us some of the inner workings of the Bush White House? Was that a mistake? Pakula never got us into the Nixon White House and Mann only showed us a snippet of a conversation between Brown & Williamson’s CEO and his lawyers—a snippet, it can be argued, that Jeff Wigand (Russell Crowe) could hear as he stormed out of the CEO’s office. Isn’t it better to keep the enemy at a distance? Shadowy? Unseen? Wasn’t that the lesson of “Jaws”?

Or is the problem that, of the two heroes in “Fair Game,” neither is a reporter? Both heroes in “President’s Men” were reporters: Watergate was a mystery and they were trying to uncover the truth. One of the heroes of “The Insider” was a reporter, and he was trying to get a former tobacco company vice-president, Wigand, and then his network, CBS, to reveal the truth. In “Fair Game,” we’re down to zero. The reporters in this movie don’t uncover the truth, they help cover it up. They have high-ranking government sources who feed them information, or disinformation, which they then spread. They provide obfuscation rather than clarity. They ambush the hero outside his house. “Isn’t it true...?” “What about the allegations that...?” They’re part of the problem.

No, the heroes in “Fair Game” are a career diplomat, Joe Wilson (Sean Penn), and his wife, an undercover CIA operative, Valerie Plame (Naomi Watts). For most of the movie, they’re working on different aspects of the post-9/11 world. She’s trying to find the bad guys in the Middle East and he’s sent to Niger to see if one Middle East ruler, Saddam Hussein, bought, or tried to buy, yellowcake uranium there. He concludes no, the administration concludes otherwise, and Pres. Bush, in his January 2003 State of the Union speech, says the 16 words that provide a justification for war:

The British Government has learned that Saddam Hussein recently sought significant quantities of uranium from Africa.

Initially Wilson concludes he’s referring to another country in Africa. He assumes they have other information. But after the war, in a New York Times Op-Ed, he comes out with what he knows.

It’s startling reading that Op-Ed, “What I Didn’t Find in Africa,” now, more than seven years later. Its language is so mild. It’s so straightforward. Wilson writes:

If my information was deemed inaccurate, I understand (though I would be very interested to know why). If, however, the information was ignored because it did not fit certain preconceptions about Iraq, then a legitimate argument can be made that we went to war under false pretenses. (It's worth remembering that in his March ''Meet the Press'' appearance, Mr. Cheney said that Saddam Hussein was ''trying once again to produce nuclear weapons.'') At a minimum, Congress, which authorized the use of military force at the president's behest, should want to know if the assertions about Iraq were warranted.

Wilson’s Op-Ed was published on Sunday, July 6, 2003. A day later the White House admitted its “WMD error.” A week after that, Robert Novak came out with his column, “Mission to Niger,” in which Joseph Wilson’s wife, Valerie Plame, was outed as a CIA agent.

Despite the outing, Novak’s column is fairly tame, too. He even owns up to Wilson’s exemplary background:

His first public notice had come in 1991 after 15 years as a Foreign Service officer when, as U.S. charge in Baghdad, he risked his life to shelter in the embassy some 800 Americans from Saddam Hussein's wrath. My partner Rowland Evans reported from the Iraqi capital in our column that Wilson showed “the stuff of heroism.” The next year, President George H.W. Bush named him ambassador to Gabon, and President Bill Clinton put him in charge of African affairs at the National Security Council until his retirement in 1998.

But Novak is also sloppy. His second paragraph begins this way:

Wilson's report that an Iraqi purchase of uranium yellowcake from Niger was highly unlikely was regarded by the CIA as less than definitive...

By the CIA? Or by certain officials within the CIA? The question was never whether Wilson’s account was definitive or viewed as definitive; the question was, and remains, why the Bush administration believed Report B over Report A.

In the movie, Wilson’s Op-Ed leads to a discussion between Scooter Libby and Karl Rove, in which the former says, “We need to change the story,” and the latter says, ominously, “Who is Joe Wilson?” For the rest of the movie, they create their own Joe Wilson in the press. Misinformation is spread. The truth struggles to get out.

After Novak’s column is published, Plame scrambles to protect her operatives. “I have 819 teams in the field,” she says. “It’s over,” she’s told. Then she clams up. She plays the good soldier. There’s a scene where she and CIA director George Tenet (Bruce McGill) meet on a park bench facing the White House, and Tenet tells her: “Joe is out there on his own, Valerie.” I assumed this meant: help him. But it means, to both him and her, abandon him. Which she does.

For most of the final third of the movie, Plame and Wilson are at odds. She even moves back in with her folks. She abandons him as surely as Jeff Wigand’s wife abandoned Wigand. The difference is that Michael Mann shows how this affects Wigand; Liman shows how this affects Plame. In terms of drama, it’s all wrong. For the final third of the movie, Plame is the good soldier for the wrong side and the movie doesn’t own up to it. It takes 20 minutes of screentime, plus a no-nonsense speech by Sam Shepard, Mr. Right Stuff, as her father, for her to come to the dramatically obvious conclusion that she needs to join her husband in fighting the Bush White House. Then she testifies before Congress, and Joe Wilson talks to students about the necessity of participation in a democracy, and we get a bit of flag-waving at the end. The End.

Feel dissatisfied? You should. For the following reason most of all:

The work of Woodward and Bernstein led to the resignation of Pres. Richard Nixon.

The work of Wigand and Bergmann led to one of the most successful lawsuits in the history of this country, in which the tobacco companies agree to pay $246 billion to all 50 states.

The work of Wilson and Plame led to ... the prosecution of Scooter Libby. Who was pardoned.

We don’t get the ending we want. The truth gets out there and nothing happens. Because we, as a country, don’t want to know the truth. We want our comfortable lies. For “Fair Game” to work, it needed to own up to this. It needed to show us, perhaps during the end credits, all of the lies and bullshit since that fateful spring and summer: Abu Ghraib and Pat Tillman and fake White House correspondents and firing U.S. attorneys and “You’re doing a heckuva job, Brownie” and “Keep Gov’t Out of My Medicare” and “You lie!” and birthers and Obama = Hitler. And on and on. They got away with it all and they’re still getting away with it. Their lies used to emanate from the White House and now they're directed at the White House, and, if anything, the liars have gotten bolder.