Or it could be a hoax. In which case... what? The laugh, rather than being on the art world, is on us? We are the suckers we thought we were watching.

And if the latter, does this make the doc more meaningful or ultimately meaningless? 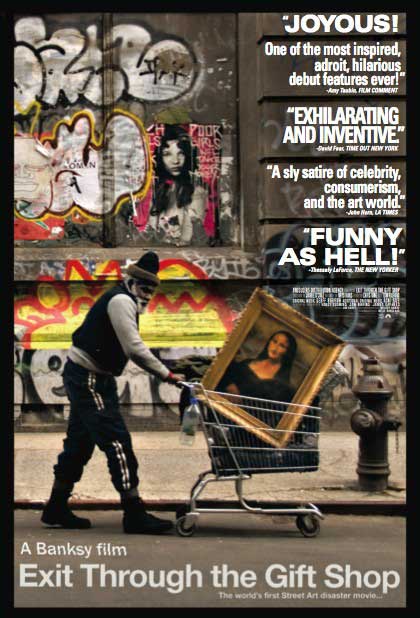 Let me begin by saying I don’t know from art, let alone street art. I knew of Shepard Fairey through the Obama “Hope” poster and its subsequent AP lawsuit, (and from articles that mentioned his original famous work: the Andre the Giant “OBEY” graffito), but I’d never heard of the others: Monsieur Andre, with his flowing, friendly stick figure drawings; Space Invader, who tucks his Atari-inspired glyphs in out-of-the-way places around Paris; Zeus, painting shadows on the streets. Most of this stuff is fun. I laughed out loud at the chicken-or-egg humor to this graffito: “SORRY ABOUT YOUR WALL —Borf.”

Then there’s Banksy, whose name flashed by during the opening credits. Isn’t the whole thing called “A Banksy Film”? He’s interviewed early, his voice altered, his entire hooded form in silhouette, and lays it all out: “The film is the story of what happened when this guy tried to make a documentary about me... [but] the film is now kinda about him.”

This guy is Thierry Guetta, a French, vintage-clothing store owner living in Los Angeles, who has the habit, possibly from childhood trauma, of filming most of the interactions in his life. In 1999, he was visiting family in Paris, including his cousin, Space Invader, and Thierry and his video camera went on his night rounds with him. The impermanence of street art was thus recorded for posterity. This was Thierry’s entrée into the street-art world.

Soon Thierry lands one of the biggees, Shepard Fairey, and follows him around for 10 months. Then he lands the other biggee, Britain’s super-secretive Banksy, “the Scarlet Pimpernel of the street art scene,” according to Cablestreet, who is famous, or infamous, for his stenciled rats, for putting up his own framed artwork in prestigious galleries, for painting a crack in Jerusalem’s wailing wall through which one can view a Caribbean paradise. When Banksy heads to L.A. and needs a tour guide, Fairey hooks him up with Thierry and his camera.

Thierry’s there, filming, when Banksy stages an intervention into Bush-era America. He blows up an orange-suited Gitmo doll and places it in full view of a roller-coaster ride at Disneyland. Banksy is able to make his getaway but Thierry is grabbed by Disney security and interrogated for four hours. The absurdity of that situation—the heavy hand of the Happiest Place on Earth, along with the obvious Disney/Gitmo connection—is both creepy and hilarious. It’s as if Banksy (and Thierry) get their antagonists to dot the i’s and cross the t’s of the very point they’re making.

All the while, though, there’s something off about the narration from British actor Rhys Ifans. It’s telling us a story, this story, but Ifans, sounding a bit like Malcolm McDowell’s Alex in “A Clockwork Orange,” reads it like he doesn’t believe it. There’s an ironic, sarcastic layer to everything he says. There's something off, too, about Thierry, who, in recent talking-head interviews, wears Civil War-era muttonchops and never seems particularly bright. Halfway through, the bomb is dropped. The doc he's making? He's not making it. He simply puts the videotapes in shoe boxes and never reviews it. It’s not until Banksy asks him to create the doc he’s been talking about that he tries to create the doc he’s been talking about.

And it’s shite: like a caffeinated man flipping through 900 TV channels for 90 minutes. (Or so we’re told: we only get a snippet.)

So Banksy, like some latter-day David O. Selznik, takes over. He’ll put together the doc, based on Thierry’s footage. And what should Thierry do? “Make some art,” Banksy tells him.

He does. “I didn’t want to disappoint Banksy,” he says.

Earlier, Banksy had put together a successful show in L.A.—which included a spray-painted elephant, the so-called elephant in the room of modern society, which led to PETA protests—and it was a hit. Thierry wanted to do something similar. He decided that all street art, from Shepard Fairey's OBEY to Ron English's creepy Ronald McDonald, was really a reaction to the brainwashing of modern society, so he renames himself Mr. Brain Wash, and creates a show, “Life is Beautiful.” It keeps growing and growing. He hires people to help. He sinks more and more of his own money into it. He’s the street artist without the street, and possibly without the art, and one watches horrified that he’s going to bankrupt himself and his family on this whim. Then he gets positive blurbs from Shepard Fairey and Banksy, and his show winds up on the cover of LA Weekly, and one becomes more horrified that his show may actually succeed. And it does. Thierry, now Mr. Brain Wash, and a celebrity in his own right, makes over $1 million selling his not-very-good artwork to not-very-discriminating patrons. He winds up creating the cover art for Madonna’s 2009 CD “Celebration.” We cut to Banksy, apparently interviewing himself, saying, “I used to encourage everyone I knew to make art; I don't do that so much anymore.”

So tables were turned and lessons were learned. The fake had supplanted the real and no one could tell the difference. We are revealed as a society without taste. Gore Vidal once called Tennessee Williams “someone to laugh at the squares with,” and that’s what these patrons are, squares, as is, ha!, Madonna, as is our whole culture. But you and I and the other theatergoers? We know. We’re with Banksy.

Except is the story true?

When the doc screened at Sundance in January, a letter from Banksy was read, which included the line, “Everything you are about to see is true, especially the bit where we all lie.”

And if it is a lie, what’s the point of it? Most of Banksy’s art has a point. Think of that stencil of Mickey Mouse and Ronald McDonald, skipping hand-in-hand with the naked, napalmed Vietnamese girl from 1972—an image both hilarious and sickening. The best of Banksy’s art puts the blunt reality in the midst of the corporate or government fantasy. But if most of the doc is a lie? It's blurring the lines between fantasy and reality in a way that feels like a giggle rather than a point.

Or is the point of Banksy's art to subvert comfortable norms—from Queen Victoria to art galleries—and the movie theater is one more comfortable norm he’s subverting? His art is designed to wake people up from believing everything they hear, and that includes, in the end, what they hear from him. He's now the man he's warning us about.

When the doc screened at the Berlin Festival in February, Banksy seemed to backtrack on the “lies” issue:

Essentially, I thought it was important to start recording the global phenomenon of street art, because I felt if we didn’t get it on tape a lot of people wouldn’t believe some of the things that were going on. As it turns out, some of the people don’t believe it anyway and they think the film is some kind of spoof. This is ironic because ‘Exit Through the Gift Shop’ is one of the most honest films you’ll ever see. There was no plan, there was no script and we didn’t even realize we were making a film until about halfway through.”

But even this backtrack raises questions. He started recording the global phenomenon of street art? Wasn’t it Thierry?

For me, it’s a little sad if the story is a lie. We already have enough lies in our lives. 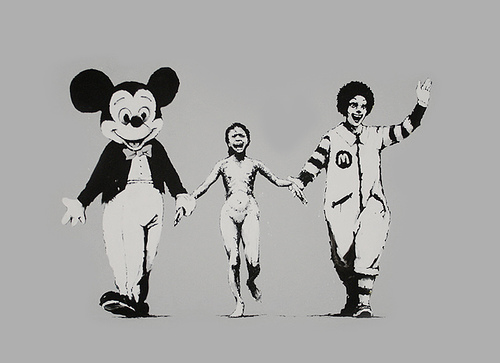