Generally in stories about a down-on-his-luck artist attempting redemption through a woman and a comeback through his art, the work of art in question, which everyone in the movie says is great, stunning, worthy of turning a life around, is actually fairly ordinary. In “Crazy Heart,” written and directed by Scott Cooper, the work of art is a country song, “The Weary Kind,” written by Ryan Bingham and produced by T. Bone Burnett. Two things: 1) it’s great, stunning, worthy of turning a life around, and 2) it only turns around the life of the artist, country singer Bad Blake (Jeff Bridges), so much. It indicates a direction but it doesn’t necessarily get him home.

Blake, 58, is overweight and a drinker. As the movie begins, the country legend is driving the American Southwest in his ’78 Suburban, Bessie, and playing in dives. Because the first place we see him play is a bowling alley, and he arrives long-haired, dissheveled, bearded and unbuttoned, ordering a drink at the bowling-alley bar, one can’t help but think of Bridge’s most famous character, the Dude from “The Big Lebowski”; but that’s where the similarity ends. The Dude was happy in bowling alleys but Blake takes one look and says 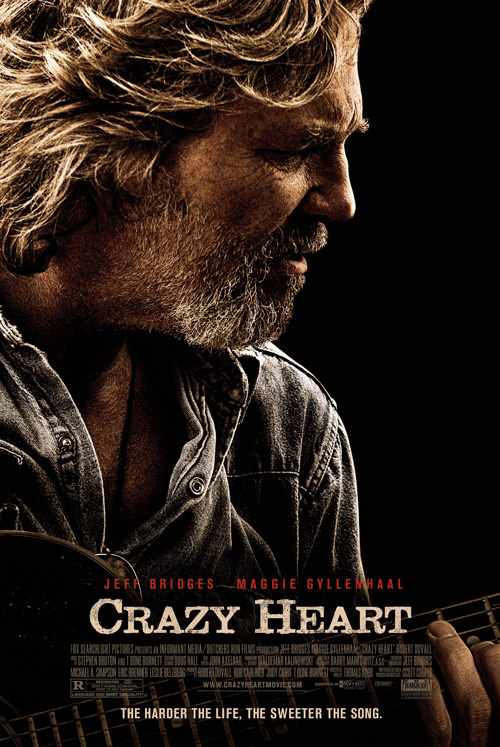 aloud to his absent manager, “Jack, you bastard.” He doesn’t get a bar tab (his reputation has preceded him), isn’t interested in rehearsing with his star-struck back-up band (including Ryan Bingham as Tony), and near the end of his set flees the stage to throw up in a back-alley garbage can. That night he sleeps with an aging groupie, one of 20 or so fans who bothered to show up, then he sneaks out of Pueblo, New Mexico. The question for the viewer: Is this bottom?

We find out he hasn’t written a song in three years. He also has a former partner, Tommy Sweet (Colin Farrell), who’s a big star, but with whom Blake refuses to play anymore. One assumes bad blood and betrayal.

The next gig is a little better, a real bar, and he arrives mid-afternoon to hear a man playing the piano and playing it well. Blake gives him a nod of compliment and the man returns the favor and then asks for another. His niece is a reporter with the Santa Fe paper. Would he give her an interview?

The niece is Jean Craddock (Maggie Gyllenhaal), and they meet cute. For the interview she gives a quick rap on his motel room door and opens it... to find him sitting in a towel and watching chicas on his motel-room TV.

It’s meeting cute but it’s meeting false. Who barges into a stranger’s motel room with hardly a knock? For a journalist, too, her questions are fairly generic, as if she’d done no research at all. Who were your influences? Did you ever want to be anything else? In today’s world of artificial country music, who’s real country? His answers are good, particularly on wanting to be a baseball player until someone threw him a curve ball (“Figured I’d stay with the guitar. Sonuvabitch stayed where it’s supposed to”), but that doesn’t excuse the questions. She also sleeps with her subject, which is a whole other matter.

She becomes, of course, the love interest, and one of the sources of Blake’s redemption, but I was rarely interested in their relationship. It felt icky. Because of the age difference? Because I didn’t quite get what she saw in him or he in her? Because her journalism is questionable? Because I knew he would let her down in some awful way?

His relationship with other people, meanwhile, always intrigued me. He finally lets his manager book him as the opening act for Tommy Sweet, who used to open for him, and one expects an egotistsical, grandstanding upstart. Instead Tommy’s appreciative and admiring of his former mentor. All this time, the problem had been Blake and his pride, his old lion’s pride, which is still on display when Tommy sneaks onstage, to squeals from the crowd, 12,000-strong, during Blake’s opening number to sing a duet with the legend. There’s a frozen disapproval in Blake’s face and body language, and there are subtle tensions when the two talk backstage, and all of that is a joy to watch because it feels real; because it makes you wonder about both men. Hell, I liked the back-and-forth Blake has with the sound-man, Bear, during the sound check:

Blake: Bear, Bear, Bear! I need kick and snare, turn down the damn guitar, you’re drowning out the lyrics.
Bear: Mix is good, man. You can’t hear what I’m hearing out here.
Blake: Bear, I’m an old man, I get grumpy. Humor me.

Tommy wants a longer tour, and songs, from his former partner, and after Blake gets into a car accident and winds up recuperating at Jean’s place, he begins to write the one that will become “The Weary Kind.” In lesser films he’d realize what he has and keep it and record it for himself and become a star again (that, in fact, is the story the trailer implies). In this film, he realizes what he has and mails it off to Tommy anyway, who, down the road, will make it a hit, which will make Blake a little sum of money. There’s a matter-of-factness to all this. It’s how life is.

Pride, though, was only one thing holding Blake back. The other was drink. Artistically he may have hit bottom at that bowling alley in Pueblo, but alcoholics have deeper, harder bottoms. In Santa Fe, Blake takes Jean’s four-year-old son, Buddy (Jack Nation), to the park for the day, and Jean returns to a darkened home. No Buddy. No Bad. She panics for five seconds until they walk in the door, Buddy with stories already spilling out of his mouth, Blake, looking a wreck, assuring her, “Nobody died.” This prefigures a later scene in Houston when Blake loses Buddy in a mall. Blake had a son from a previous relationship, a grown man now and understandably uninterested in his father’s attempts to reconnect with him, whom Blake last saw when he was four. The man has a bad habit of losing four-year-old boys.

Buddy’s found in the mall but Jean is unforgiving and cuts things off with Blake for good. And that, after another bender, is Blake’s bottom.

“Crazy Heart” could be subtitled “The Partial Redemption of a Country Legend.” That’s really all it is. Its appeal lies in the peformances—particularly Bridges, who is both monumental and as ordinary as any day in our lives—and in the details. I like the size of Bridge’s mangled fingers next to Buddy’s. I like how, saying good-bye in Santa Fe, Jean grimaces away from Blake’s alcoholic breath. (“Mustard gas and roses,” Kurt Vonnegut used to call it.) I like the small scene, after he sobers up and after Jean still rejects him, where he’s cleaning his place and finds Buddy’s Superman t-shirt under the bed. He picks up the phone. Then he pauses, sets the phone back down, folds the little boys’ t-shirt in his lap. It’s such a small shirt and that emblem is so big and says so much. Will he mail it back? Will he keep it? We don’t know. We just know he won’t use it as an excuse to inject himself into her life again. It wasn’t easy being Bad, but it’s even harder being decent.

The movie has some false notes but the music doesn’t. The songs this country legend sings are actually good songs:

They’re as matter-of-fact and down-to-earth as the movie, which almost didn’t get distribution. Now it’s out in a handful of theaters making a little sum of money. It’s how life is.