A story has a dramatic arc, a life doesn’t. That’s always been the problem with biopics. So you understand why filmmakers such Anne Fontaine, who directed and co-wrote “Coco Avant Chanel,” decide to dramatize a portion of the life rather than the whole, long, messy thing. You also understand why Fontaine chose this portion of Chanel’s life: the portion—for those whose French is worse than mine—before she became a fashion icon. People like watching people rise. Audiences are made up of folks with unfulfilled dreams who enjoy sitting in the dark watching someone with whom they can identify fulfill theirs.

So why doesn’t the movie work? Does the title character remain too unknowable? Is her love affair with Arthur “Boy” Capel too uninteresting? Are the clues to how she will eventually transform the fashion world, and thus the world—having women dress for women, and for comfort, rather than in the confining corsets and plumy hats and long heavy dresses of the period—too facile? Does the movie not care enough about why she matters (fashion and proto-feminism) in favor of why she doesn’t (love love love)? 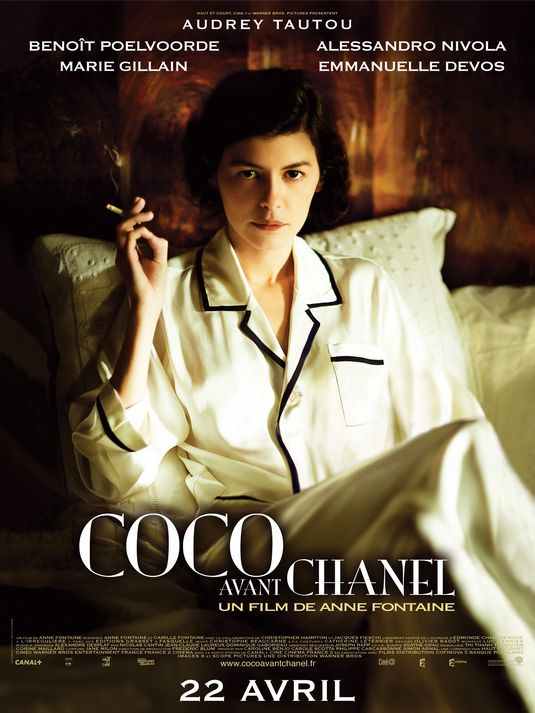 The movie begins when Gabrielle Chanel, age 10, all big dark eyes, is deposited at a Catholic orphanage and casts a final, bewildered glance at the carriage driver, seen in quarter-view, who, one assumes (correctly), is her father. Historically, this orphanage was where Gabrielle learned to be a seamstress, and where, one suspects, the austerity and simplicity of the nuns’ habits made an impression on her fashion sense, but we only get glimpses of this. We mostly take away a sense of powerlessness and loneliness in echoing hallways.

Cut to: A music hall during the belle époque, where Gabrielle (now Audrey Tautou) and her sister, Adrienne (Marie Gillain), perform the song “Qui Qu’a Vu Coco,” before rowdy crowds, then mingle with the guests, mostly upper-crust military officers and barons. Gabrielle, quickly dubbed “Coco” after the song, is a lousy mingler, but she pares (and pairs) nicely with Etienne Balsan (Benoit Poelvoorde), who is rich, cynical, out for a good time, and amused by Coco’s bluntness. Coco’s sister becomes the mistress of one Baron, but Balsan leaves for his estate in Compiegne without proffering an invitation to Coco. So she simply shows up.

The belle époque was the beautiful time for aristocrats like Balsan, not poorhouse candidates like Coco, and she bristles under the strictures of their unequal relationship. So do we. At first he keeps her hidden. When she emerges, he wants her to perform. She disapproves of the waste and frivolity of the upper classes, and wants work, but wonders what she can do. Sing and dance? Become an actress like Balsan’s frequent guest, and former lover, Emilienne d'Alençon (Emmanuelle Devos)? All the while Coco becomes known for her simple, freeing, boyish fashion sense. Emilienne keeps asking about her hats. Can you make me one? Here’s my rich friend. Can you make her one?

The story is obviously moving in this direction but the title character doesn’t seem to realize it. Is this good? An example of life happening while you’re busy making other plans? Or is it bad: The filmmaker’s assumption (film-in-general’s assumption) that audiences are only interested in what Gore Vidal famously called love love love?

Yes, Coco falls in love, with British coal magnate “Boy” Capel, and off they go for a weekend by the sea, where she gets the inspiration for the striped sailor’s shirt and the little black dress. Productive weekend! There’s a good scene in the tailor shop where she lays out her black-dress specifications, resisting, all the while, the tailor’s polite push toward the conventional. Him: It should be peach tones. It should have a corset. It should have a belt. Her: Non, non, non.

Coco’s happy with Capel but he’s got a secret—he’s marrying British money—and Balsan spills the beans, partly from jealousy, partly because he cares about Coco and doesn’t want her hurt. Balsan’s role throughout is reminiscent of Bror Blixen (Klaus Maria Brandauer) in “Out of Africa”: the disreputable man the heroine is stuck with but uninterested in, even though he’s the most interesting character onscreen. He has a laissez faire bluntness that’s fun and vaguely sexy. He even proposes to her.

Instead she starts a hat shop in Paris. Finally! one thinks. Ten seconds later, a woman says, “Look, a gentleman.” Oh no! one thinks. Yeah, it's “Boy” Capel. More love-making. More promise-making. They’ll have two months by the sea. Then he dies in a car accident. She sees the wreck. She cries. Then she makes dresses, puts on a fashion show, and everyone applauds. FIN.

Me, I knew little about Chanel going in so it was all news. At the same time, the movie left me wondering to what extent she was part of a trend and to what extent she was ahead of the trend. Did she single-handedly put women in pants? In this fact alone you see the redefinition of beauty in the 20th century. Voluptuous women look better in dresses, thinner women in pants. With women in pants, western society’s definition of beauty shifted from the zaftig to the thin. Coco was not considered beautiful, then helped redefine beauty closer to how she looked. Not bad! This shift also led to anorexia. There are corsets in the mind no fashion designer can remove.

In the end, “Coco Avant Chanel” has some of the realism of French films but also the glossy, dishonest feel of Hollywood films. “In order to be irreplaceable,“ Chanel once said, ”one must always be different.” This one isn’t.