“Yes, a great game and never mind the early stuff. Tied five times, it produced six lead changes, and rehabilitated itself, from stinker to thriller, along the way. Stricken Cardinals fans at Busch Stadium stood in silence in the ninth inning and again in the tenth, with their mittened paws covering their faces up to the eyes, while their team teetered on the brink of elimination, one strike away from winter. In the ninth, with the Redbirds down by two runs, there was a brief shot of Cardinals ace pitcher Chris Carpenter and a couple of teammates laughing about something at the dugout rail, and I thought, What’s with these guys? Now we know...”

“Washington didn't leave the dugout, but Craig left the yard with a solo homer that trimmed the Rangers' lead by a run. Eventually, Adams did enter the game and killed an incipient St. Louis rally. One wonders, though ... Would Allen Craig have hit a home run against Mike Adams?

”Oddly, nobody's really talking about Adams' late entrance, perhaps because everybody still seems to think that Derek Holland walks on water. Hint: He doesn't. He's a good pitcher who pitched great in Game 4, and might be slightly more effective coming out of the bullpen than starting. But he's not Mike Adams.“

”Feliz looked uncomfortable on the mound, but I think he tends to look that way. Part of the magic of Mariano is the placid look, the slumped shoulders, as if this is all just a formality, as if he had already saved the game a few hours before and is only performing it once more for those people who missed it. Feliz, though, is a bit twitchy, he expresses disgust, his motion is violent and impassioned, and I thought after he walked Berkman he looked unsure.“

”Really and truly, this was an ugly game for about six or seven innings. But then it got beautiful right at the end.“ 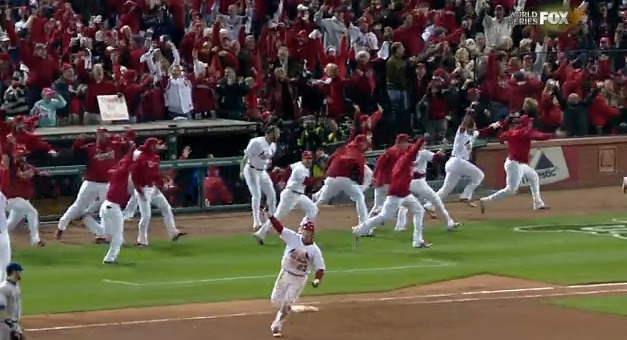