“The greatness of 'Funny People' hinges on Sandler’s ability to adeptly capture the sadness of a comedic actor looking back on his career when confronted with mortality. And Sandler nails it! Hits every goddamn note, moment and scene, masterfully. 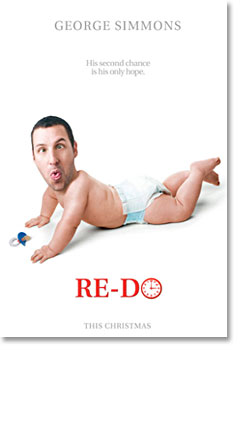 And while I do believe he’s a great actor (when he wants to be), part of it also comes from Judd Apatow so skillfully tapping into Sandler’s own regret about his own choices and then seamlessly filtering them through the character of George Simmons. That’s why the parodies within 'Funny People' — like 'Re-Do,' where a lawyer gets magically turned back into a baby or 'MerMan,' the story of a male mermaid — hit so hard. It feels like Sandler is acknowledging the ridiculousness of his filmography and owning up to it.

”That’s what makes 'Jack and Jill' so perplexing. How can you soberly acknowledge all that one year, and then star in 'Jack and Jill' the very next? And more important, how can you leave that much talent on the table? It’s like turning down the opportunity to play for a championship in order to spend another year on a bottom feeder.“

--Toph Eggers, screenwriter, in the salon.com piece ”The Tragedy of Adam Sandler."