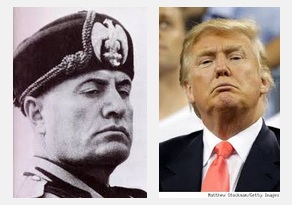 “He's not Hitler, as his wife recently said? Well, of course he isn't. But then Hitler wasn't Hitler—until he was. At each step of the way, the shock was tempered by acceptance. It depended on conservatives pretending he wasn't so bad, compared with the Communists, while at the same time the militant left decided that their real enemies were the moderate leftists, who were really indistinguishable from the Nazis. The radical progressives decided that there was no difference between the democratic left and the totalitarian right and that an explosion of institutions was exactly the most thrilling thing imaginable.”