“Wayne was slinking around Fox, embarrassed about the failure of The Big Trail, utterly demoralized by Girls Demand Excitement, when he ran into Will Rogers, the biggest star on the lot. Rogers saw that Wayne was down and asked what the trouble was. Wayne explained his situation, and the sensible Rogers told him, ‘You’re working, aren’t you? Just keep working.’”

— from Scott Eyman’s “John Wayne: The Life and Legend.” Wayne considered it the best advice he ever got, and it is great advice. I'm only 7% of the way through the book (Kindle gives percentages rather than pages numbers, which is really, really annoying), but so far the book is excellent: well-written and well-researched. 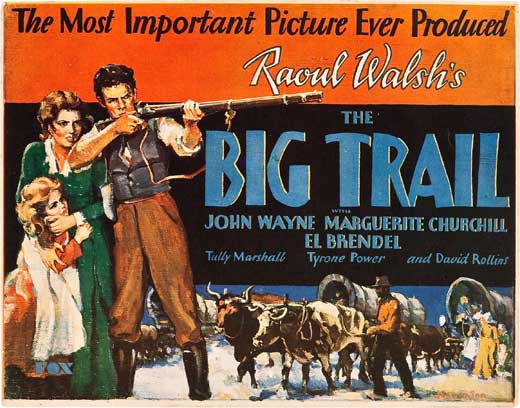 Raoul Walsh's “The Big Trail” bombed at the box office, in part, perhaps, because it was filmed in 70mm when most theaters could only accommodate 35mm. But Wayne, in his first starring role, got the brunt of the blame. It would take 10 years, and the intervention of John Ford, to turn his life around.