In March 2000, in a hotel lobby in downtown Seattle, I interviewed director Aviva Kempner, who was visiting Seattle to promote her documentary “The Life and Times of Hank Greenberg,” which was showing at the Jewish Film Festival of Seattle. Here’s my review of the documentary and my profile of Ms. Kempner from back then.

This month, Ms. Kempner will be appearing with a friend, John Rosengren, author of “Hank Greenberg: Hero of Heroes,” at events in Washington, D.C. on April 4; in New York April 25; at the Yogi Berra Museum on April 26; and at the Jewish Community Center in New York on the evening of April 26. John’s full schedule can be found here.

This is part II of my three-part interview with Ms. Kempner, edited and condensed. You can read part I here.

Where did you grow up?
In Detroit. I grew up always hearing about Hank Greenberg. My father was an immigrant—took my brother and I to games—he was crazy about baseball. I remember my father either watching baseball or listening on the transistor radio. Later when he moved to Isreal he always said he was going to miss two things: his children and baseball. 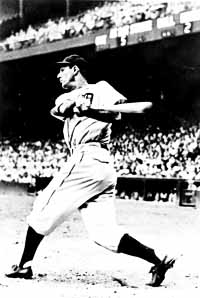 But I was never sure of the order.

[Laughs]
I recently made that joke to someone and they looked at me and said “Oh, that’s awful. You think he missed baseball more?” And I thought: This woman has no sense of humor.

I think it’s pretty obvious from my film that having a sense of humor is a primary matter. People ask me who my influences are in making this film. The single most voice that was behind my head in making “The Life and Times of Hank Greenberg,” style-wise, is Barry Levinson’s “Diner.” I think it is the perfect comedy. It so identifies how men love sports. He wouldn’t marry her until she knew the Colts. That’s what I wanted to capture. That wonderful obsession, adoration, involvement …

Pride?
It’s pride, too. When I decided to do the film, I was opening up my first movie, which I produced, called “The Partisans of Vilna,” about Jewish resistance to Nazis, and I heard Hank died. And I’m obsessed with the thirties and forties. I was born in Berlin after the war, ‘46, and Fascism obviously had a very negative affect on ... my family dynamics. I never knew a grandparent, I never knew an aunt, they were all killed by the Nazis.

Your father is ... American?
No. My father was originally from Lithuania but he came here in the 20s.

And then...?
Joined the U.S. Army and was sent first to the Pacific and then to Berlin after the war, where he met my mother, who—I’m going to have a bagel, I hope you don’t mind—who’s ... My mother’s Jewish but passed as a Polish Catholic in [Nazi] Germany. Her parents and sister perished in Auschwitz. Then she was liberated by Americans and brought to Berlin. My Dad wrote a story about a brother and sister being reunited, and it was my uncle surviving Auschwitz and my mother surviving passing as a Polish Catholic.

I grew up in Berlin and I came to America when I was four. To Detroit, where my uncle lived.

Do you remember Europe at all?
Totally blanked. Even the language.

I grew up in Detroit, going to games with my father, and every time we passed “The Shrine of the Little Flower”—that’s Charles Coughlin’s Church—my father would point his finger and say, “That anti-Semite!” And every Yom Kippur I would hear about Hank Greenberg. I thought it was part of the Yom Kippur liturgy.

So you’re wondering why at age 40 when I heard Hank died that I didn’t know this was my next film? It was the culmination of everything that I had grown up with. And it’s my love letter to Detroit.

But I didn’t know when I started how far-spread Hank’s adoration was in the Jewish community. I thought maybe it was more a Detroit phenomena? But time and time again, older Jewish men, older Jewish women, say to me, “This is what Hank meant to me.” And then you have that guy who gets married with the Hank Greenberg card? Arn Tellem grew up in Philly. When I met Arn—he’s a big sports agent, his wife’s the VP of CBS—and he told me his stories, and how he joined his law firm because Steve Greenberg was there, I realized that I wasn’t the only second-generation [American] brought up like I was, that Hank was as powerful a figure to the Jewish community as Jackie Robinson was to the black community. And I’m just proud that I was able to bring it to the screen.

There’s a lot of heavy agendas I have in making my movie.

Did you ever think of using a narrator? You did in “Partisans.”
I never wanted a narrator, it’s just not my style. I think we took an extra six months to a year to edit just because I didn’t want to use a narrator.

But I do think there’s a narrator in the film, and that’s Hank’s voice. For his biography, “The Story of My Life” by Hank Greenberg, edited by Ira Berkow—hopefully it will be re-released very soon—Hank talks with the microphone. And if you look again at the film you’ll see that throughout the movie he really tells his own story. And I love that New York accent. And I love... He talks about “Some broad would come up to me...” I have a young assistant editor, who’s a woman, and she said, “You can’t use that!” And I said, “What are you talking about? That’s how the man talked.” And later on, after the film was finished, his widow said to me, “I love that you used ‘broad,’ because that’s how Hank talked.” I’m a flaming feminist but I’m not going to censor something that’s so much the nature of that period.

What else can I talk about?

Were there other talking heads you couldn’t get?
One that didn’t work out was Joe DiMaggio. He just declined. I don’t know why.

How about Ted Williams?
I approached Ted. I could not get an on-camera interview, I did it over the phone, and it didn’t work. But he did come out for my opening at the Yogi Berra Museum the night before I opened in New York. He loved, loved Hank, and he just gave the best quotes for the film.

Where did you get some of these other guys—like Bert Gordon?
As I said, I wanted to replicate “Diner,” but it’s really replicating my father. My father died in ‘76, I could never get him; but I grew up with his humor about being Jewish and being a fan. So I had to seek out fans. I think the everyday fan can be as funny as Walter Matthau.

Since I grew up in Detroit I had an advantage, I wasn’t going in cold. Bert Gordon is a family friend of my mother and my step-father’s best friends. So I knew about Bert right away and I went to him.

Bert Gordon is no longer with us; he never saw the end of the film. But Bert was the funniest man alive. There are two men that when I was filming I literally had to keep my mouth like this [clamps hand over mouth] so I wouldn’t start laughing? Walter Matthau and Bert Gordon. The day Bert said, “We were all five-foot-four, buzzing around … I never saw a Jew so big,” I thought I was going to piss in my pants.

And he said, “Well, you gotta interview the other people I used to go to games with, who Roger Angell has written about,” so…

Roger Angell?
In one of his New Yorker essays.

Wait, those are those guys? The Tiger fans in “Five Seasons”?
Oh, you’re good. Yeah, those are the fans: Max and Bert and Don. I started interviewing 10 years ago. I had to stop because I didn’t have the money. Bert had the horrible habit of smoking, and he had emphazema, so he died. He’s under the dedication. Actually most of the people in my film have died, three-fourths of them, all the old players.

It also helped opening up the film after America’s re-love affair with baseball. I think Mark McGwire and Sammy Sosa helped me a lot, too. The adoration of Sammy Sosa by Dominicans is a total repeat of Jackie and Hank. Driving around New York, these gypsy cabdrivers, who are Dominican, soap their cars with how many homeruns he had. The big, big difference is I didn’t hear any negative catcalling because Sammy was black or Latin. We’ve come a long way as a nation. John Rocker aside. And even the way Rocker was pounced on really shows how much growth there is.

But my film shows you how insidious [racism] was. Can you imagine going to work everyday and get that catcalling? Based on how you were born? I just can’t imagine that. Joe Falls says there were Irish, there were Italians, but there was only one Jew. But as Hank said, it made him do better.

It was like all those rejection letters [I got, asking for money]. Today, I’m really having fun thinking, “All those guys who said no to me...” Actually one man wrote me and said, “I’m so sorry I didn’t send you money, you’re getting all this coverage, congratulations, you deserve it,” and I wrote him back, “But you did give me money.” It was so cute. He was feeling guilty he hadn’t—he was an older man—and he’d forgotten he had. 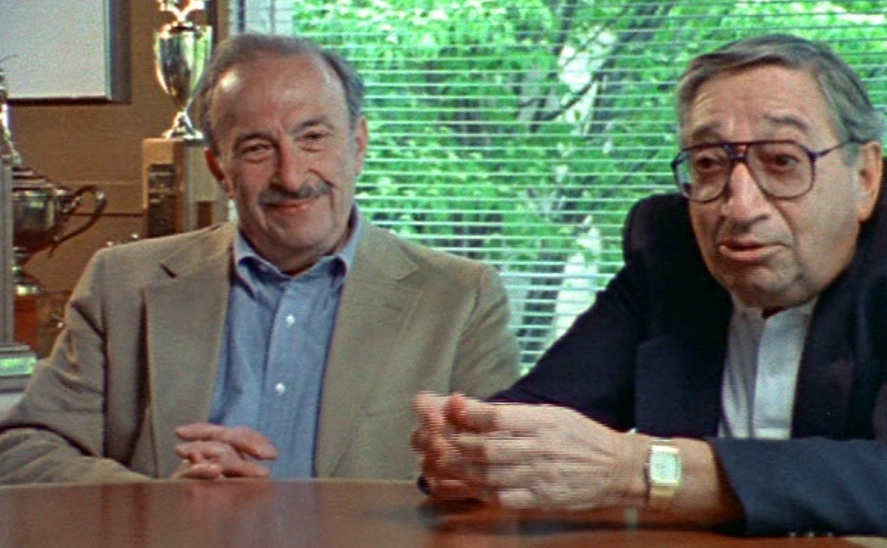 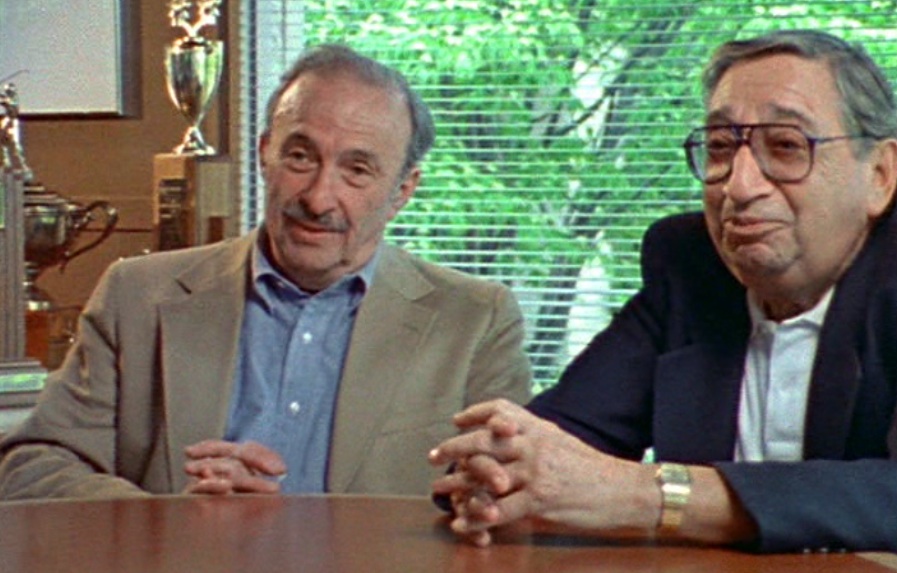 Don Shapiro and Bert Cohen in “The Life and Times of Hank Greenberg” (2000): “You talk about the chosen people.”