I got the news from Joe Posnanski on Twitter, which seems appropriate. One of the great mini-bios Posnanski wrote for his “Baseball 100” series—soon to be a book—was about Phil Niekro (No. 83), and his father, and Phil's attempt to win his 300th game on the last day of the 1985 season when his father was in the hospital. Exactly. Louis B. Mayer would've killed for that story.

“My father was a coal miner in Eastern Ohio,” Niekro explained. “Three shifts. That thing I remember most was him coming back from the coal mine, and I wouldn't even recognize him. 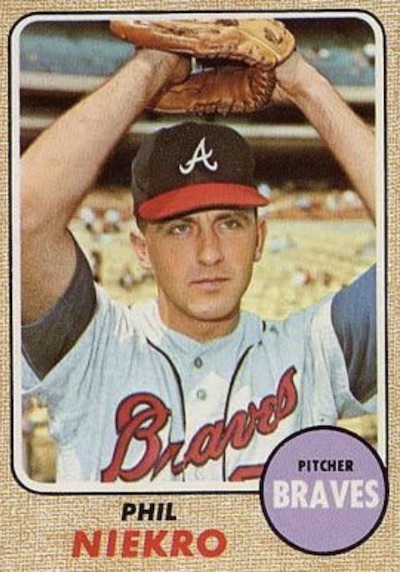 ”He would come home and the first thing he would do was come up to us on the front porch. Me and (my brother) Joe would be waiting for him. He'd have his lunch bucket with him, and he opened it up, and there was always something for us. There was a Twinkie in there or a banana. He would give me half. He'd give Joe half.

“And then, before anything else, we'd go into the backyard. We'd play catch, just me and my Dad. Joe would set up on the porch and watch us. We'd play catch until it got dark. Then, when it was dark, when it was over, we'd go and have dinner. Then he would go to the stove and heat some water, pour it into the tub, and he took a bath. I remember how black that water was after he was finished.

”Then my Dad would go lay down on the couch, and he'd fall asleep listening to the Cleveland Indians.“

By bWAR Niekro is one of the greatest pitchers of all time. His 97.0 would rank him the 11th greatest, just behind Christy Mathewson, and ahead of Steve Carlton, Fergie Jenkins and Pedro Martinez. Growing up I never would've thought it. I still don't, to be honest, and neither does Poz, since he has all those guys ahead of Phil on his list. Niekro was a five-time All-Star, never won a Cy Young, and it took him five tries to make the Hall, which, in the modern era, has to be a record for a 300-game winner. (Close. It ties him with Don Sutton.) I don't think I saw him pitch much. His team, the Braves, didn't make the postseason in the 1970s, and so weren't on TV a lot, and of course never played my Twins at Met Stadium in Bloomington, Minn. He was just a guy on a baseball card. An old guy even then. He was a good pitcher whose younger brother Joe was good, too. They were like the Perrys, and you could have a nice argument over which pair of brothers were better. The Niekros won more games (539-529) but the Perrys got the Cys (2 for Gaylord, 1 for Jim, 0 for the Niekros). By bWAR, it's the Perrys by a nose: 131.4 to 125.7. There are other measurements.

Horsehide Trivia, from SABR, sent out this In Memorium quiz yesterday. For baseball fans, these aren't true quizzes, since we know the answer, but a way to honor the man.

Q: Which Hall of Famer's pitch was so effective that it actually became his nickname?

The nickname is ”Knucksie“; Bob ”Mr. Baseball" Ueker turned his career around by encouraging him to throw the knuckleball even though it made Uek, the catcher, look foolish; the childhood friend was John Havelicek.