In June 1989 I was 26 years old, recently returned from a year in Taiwan, and driving around at night with some friends in an unfamiliar warehouse district north of downtown Minneapolis when the news came on the radio: Ayatollah Ruhollah Khomeini, Supreme Leader of Iran, was dead at the age of 86. We were a fairly liberal group in a very liberal city but a spontaneous cheer went up in that car. Khomeini had been a thorn in our country's side for 10 years, we'd been hearing about him for 10 years, and it was nice to know we wouldn't be hearing about him much anymore. A minute later we sobered up. It felt classless, cheering for death.

Last night Patricia and I had some friends over for Sunday Movie Night. We used to do this fairly often but got off course this winter; but some of our members, who‘ve been through hellacious springs, needed it again, so we gathered in our living room for homemade pasta and wine and salad, to watch Martin Scorsese’s “Goodfellas.” Afterwards, before going to bed, I checked my email and received one from Ward, the man who made the homemade pasta:

I immediately went to the New York Times site for confirmation, then Andrew Sullivan to read his thoughts, then Salon to read their headlines (which were already aftermath headlines; “And now what?” headlines). I looked up Abbottabad on Google maps. Finally I went to Facebook. “Oh right, Facebook,” I thought. I scrolled backwards to see who posted the news first. It was a friend from Delaware who referenced, obliquely, how happy Wolfie B. had made her with “those five words.” Two people had already posted this photo, which made me smile, since it encapsulated the seriousness of one side of our political debate versus the decided lack of seriousness on the other: 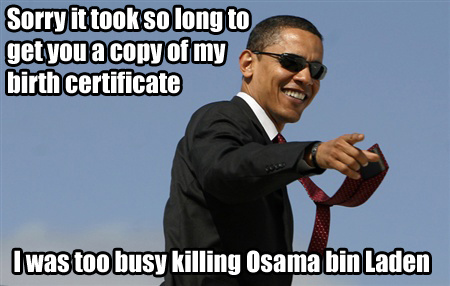 Someone wrote “The world feels better tonight.” Another: “I wish I had some fireworks to set off,” to which her friend, our mutual friend, replied, “I just heard one go off in my neighborhood.” People were gathering at the White House, and in Times Square, to cheer. A local journalist admonished his readers: “I hope people (esp. liberals) don't overthink this. Bin Laden dead is a good thing.” A movie critic wrote, “If you‘re in Times Square in a Navy uniform tonight and don’t kiss a nurse, you have no sense of history. And no game.”

There were also the usual status updates about weekend trips, Sunday concerts, and funny things the child said.

Despite the wine, I stayed sober. I didn't disagree with the local journalist—“Bin Laden dead is a good thing”—I just knew the world wasn't much of a changed thing. Bin Laden has been a thorn in our country's side for 10 years, and it was nice to know he was gone, but there will be others, because there are always others. I simply hope he was the worst of it. In this way, and perhaps only this way, Osama bin Laden and I were in accord. He wished to be the western world's greatest enemy for the 21st century, and I sincerely hope, when the century's history is written, he's gotten that wish.