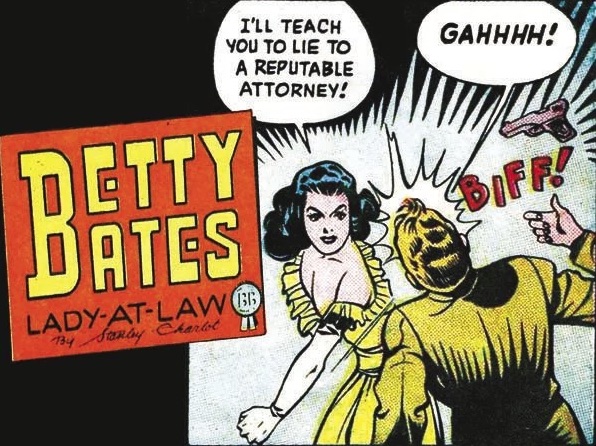 No, honey, not Betty Page.

Last weekend I did something I hadn't done for six years—and before that, whoosh, decades. I attended a comic convention. Specifically, the Emerald City Comic Con 2018. ECCC to friends.

Speaking of: I went stag, which is a bad way to go—although it does make it easier making it through crowds. It also helped that I wasn't in any hurry. Plus I'm still thin enough to—apologies, sorry, my bad—squeeze through when necessary.

My goal again was the comic resellers in the far back of the main room—the whole point of the comic convention when I was a kid, and now an afterthought. I‘ve been reading a book, “Take That, Adolf!” about WWII-era superheroes who, on their various covers, deck Hitler (Captain America) or choke him out (Cat-Man), and I was curious if there were more books about same, or, ideally, not exorbitant copies of originals. Not the popular ones, mind you (I’m a working man), but heroes who didn't last long: Uncle Sam, Steel Sterling, The Shield. How much does a Shock Gibson go for these days? I was curious.

I remain curious. There was one table that laid out their Golden Age comics in easy-to-rifle-through fashion, even as I was extra careful in doing so. These things were almost as old as my father, after all; they had made it through so much just to get here. Some, shockingly, were affordable—i.e., less than $250. I kept thinking, “Hey, I could buy this!” And I kept having to rein in that thought. Because ... to what end? I don't collect. When I was young I had the desire but not the money; now I have the money but not the desire. Well, not an overwhelming desire, but there's something there. Just holding a copy of Action Comics #28 was thrilling. Just the smell of old comics took me back. It's my madeleine.

At one point, thinking practically (i.e., relating it to my day job), I asked after copies of “Betty Bates, Lady at Law.” Ever since I found out about her, about 10 years ago, I‘ve been intrigued that she became a comic-book character at a time when women were, what, two percent of law school grads? And probably less of practicing lawyers? And probably less of comic-book characters? The guys at the Golden Age stand nodded and directed me to another seller, where, they said, they’d seen such a copy. But when I arrived, I didn't see any “Betty Bates”; I saw “Betty Page.” Had I been misunderstood? I asked again. And again, they thought I said “Betty Page.” When I clarified, they exchanged glances and eyed me dubiously, then looked her up in their comic-book catalog. Bupkis, as they'd suspected. I got a “Check yer facts, kid,” look, to which I nodded. I should‘ve checked my facts. She existed, she just never had her own comic. She was always part of “Hit” Comics. (And now a book is available that collects all over her old comics in one place; I might have to get it.)

It wasn’t a bad few hours. I checked out the wares, checked out the cosplay. On some level, these should be my people, fellow nerds, but I feel like an interloper now. This thing that used to be just skinny nerds and overweight resellers has been turned it into a party, a real party, and I'm late to it. I'm late to a party I left early.