Yesterday afternoon, heading west down James Street under the I-5 bridge, which was litter-strewn and smelled of urine, I saw an elderly couple in matching blue “Griffey 24” T-shirts shuffling in the same direction. “I bet I can guess where you guys are going,” I said as I passed them. They agreed happily, particularly when my own blue “Griffey 24” T-shirt came into view. A block later, I saw a guy wearing the '95-era teal-green Mariners jersey with “Griffey 24” on the back. I would see a lot of “Griffey 24”s on my way to Safeco Field, where, before the Seattle Mariners played the Los Angeles Angels of Anaheim, the Mariners organization woud retire its first home-grown number: 24. Griffey. 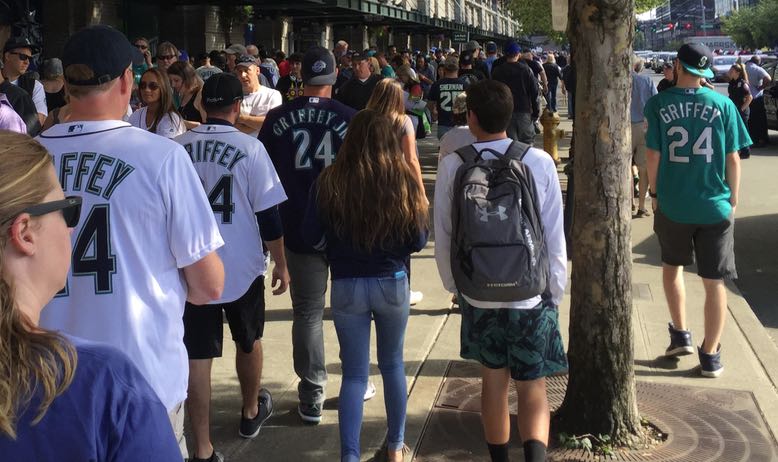 All the Griffeys with nowhere to go.

They could've done it any time since June 2010 but for some reason waited until Ken Griffey Jr. was elected to the Baseball Hall of Fame with the highest vote percentage ever (99.3%). They waited for the bestowing of the national honor before allowing the local one.

The morning had been overcast and cool, but it was mostly blue skies and around 70 degrees by the time I hit Safeco at 4:30 for the scheduled 5:30 ceremony. Even before then, I noticed an oddity along Occidental: folks lined up next to Century Link Field, where the Seattle Seahawks play, a good 500 feet from Safeco. Were people buying Seahawks gear on Griffey Day? Nope. It was the line to get into Safeco. It stretched back that far. I couldn't believe it. The area around Safeco was a mass of people and snaking lines trying to get in to pay their respects. Had the gates not opened in time? Did the Mariners organization not anticipate the crowd? Couldn't they even get this right on Griffey Day?

I was meeting my nephew Jake. A sculpture of a baseball glove with a hole in it, what we once called “the Russ Davis glove” but is now just “The Glove,” is a common meeting spot, and thus a kind of crappy one, since everyone meets there, and since everyone else wants to get their pictures taken there. It attracts a crowd, in other words, and we already had a crowd. We also had a saxophonist sitting nearby, playing jazz, and a religious nut with a gigantic sign, carrying his own amplification system and speaking into a mike about how we were all doomed to hell for coming here on this sunny day to pay respects to a man who had given us so much joy. I assume this man feeds off indignation, because otherwise he would've withered beneath the gaze of half the people passing him; many were plugging their ears less because of his content than its volume.  I asked a stadium official if something couldn't be done but he threw up his hands. But the volume? I asked. Surely there were limits. He threw up his hands.

By the time Jake arrived some of the chaos had diminished but we still stood in line a good 15 minutes to get in through the Team Store, which was also packed. Standing in lines would be part of the evening. After the ceremony but before the game, Jake stood in the line for the men's room while I stood in the beer line, which were conveniently located next to each other. When Jake emerged he looked for me at the front; I had to wave to him from the back. I'd moved maybe 10 feet. By the time we found our seats again the Mariners were behind 3-0 on a three-run homer by Mike Trout, the current best player/centerfielder in the game.

But I was there for the ceremony. I share in a season ticket package with a group of guys, and when we'd divvied them up last March, this was the first game I'd chosen. I wanted to be there for this. 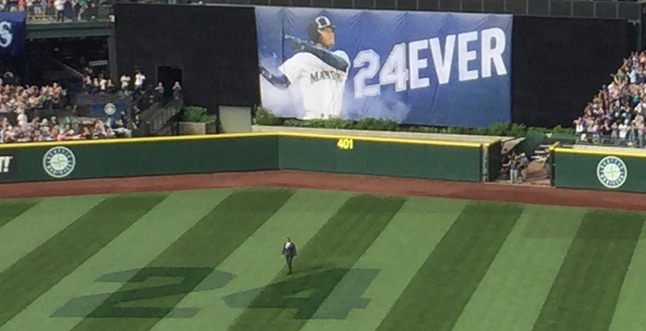 The Kid, no longer The Kid, emerges from center field.

The two MCs had a tonal problem. The main one, play-by-play man Rick Rizzs, tends to spoonfeed his audience with a little too much sugar; the other, new Mariners president Kevin Mather, had all the warmth and charm of a drill sergeant. Befitting his demeanor, he dropped a bombshell, but a welcome one: a statue to Junior would be unveiled next year outside Safeco. Nice. And about time.

Junior emerged from center field. That was cool. We saw videos that the team had already posted on social media. People kept referring to Safeco as The House that Griffey Built. “And then abandoned,” I added.

There was a crescent of folding chairs between home plate and the pitcher's mound, and on the right-hand side (from the hitter's perspective) sat baseball executives, along with Griffey's wife and daughter and eventually Junior; and on the left, former players, wearing better suits than the suits. The executives tended to bring formality and boredom, the players spontanaeity. They gave each other shit. On the big screen, Willie Mays honored the junior #24 in Jewish mother terms: he wondered why he never called anymore. Junior promptly got out his phone and dialed up the Say Hey Kid. 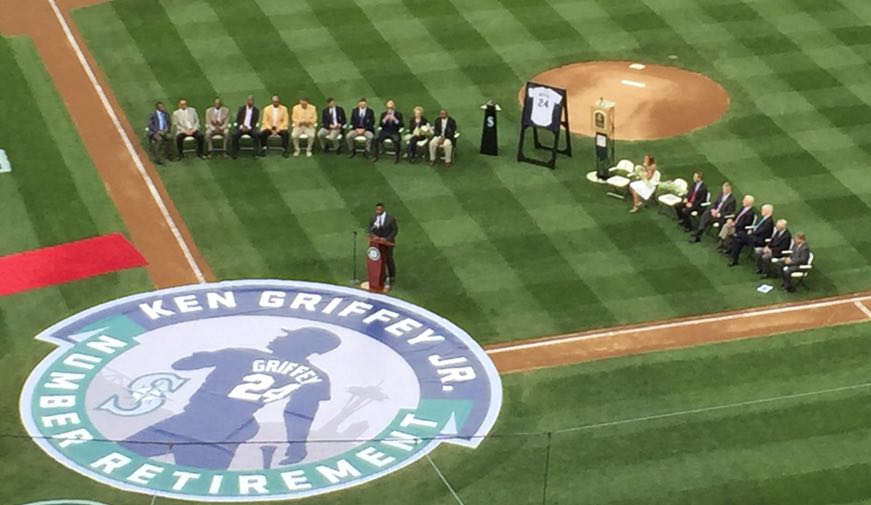 The athletes were an odd mix of the expected (Alvin Davis, Jay Buhner) and the unexpected (Hall of Fame members from other Seattle sports teams). When I think Junior I don't necessarily think Steve Largent. Two other #24s showed up as well: Junior's first idol, Rickey Henderson, and his dad's old teammate Tony Perez. No Sr., though. No Randy or Lou Piniella. The latter two sent him wishes via the big screen, as did Henry Aaron.

Junior's speech was relatively short. He talked up his minor league days—Bellingham and San Bernadino—then making the Major League team out of spring training in '89, and the joke the manager and players played on him (the organization, they said, had traded for Dale Murphy so were sending him down). He talked up the joys of Seattle, which were mostly personal: meeting his wife; the birth of his first two kids. He gave Rickey Henderson shit. When Henderson broke Lou Brock's stolen base record, Henderson infamously said—with Brock standing next to him—“Lou Brock was a great base stealer, but today, I am the greatest.” So Junior told Rickey that he, Rickey, was great “but today I am the greatest.” 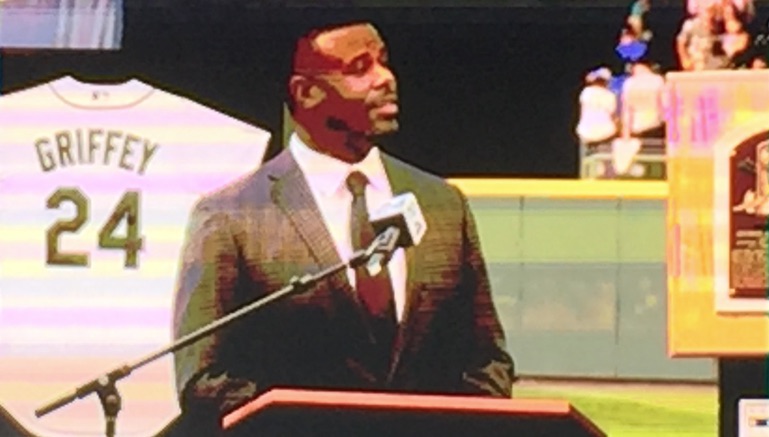 He also talked up the current players, watching from the dugout with their caps on backwards in homage; he told us to come out and support them. He was kind of insistent on it. This rang a little off to me. I get what he's saying. But we're dealing with a team that has the longest current postseason drought in baseball, and it's neither the fault of the players (most of whom have been here a short while) nor the fans (who can only do so much). If anything, the fans should've supported the team less over the years—particularly in the dead days of the early 2010s when falling behind 2-zip meant the game.

On the plus side, that team is no longer this team, and it turned out to be a helluva game—a Refuse to Lose game. The M's were down 3-0, then 6-2 in the 5th, and came back and made it 6-4 on a Gutierrez homer in the bottom of the 5th. We left the bases loaded in the 6th but then the Angels left the bases loaded in the top of the 7th. We got them loaded again in the bottom half with three straight one-out walks, and eked across a run on a sac fly. That seemed like our nibble until Sean O'Malley suddenly launched a homer to right field to put the M's on top for good. As if adhering to Junior's admonition, after the homer, fans began chanting the journeyman's name—Sean Oh-Mal-Yi (clap clap clapclapclap). Sean Oh-Mal-Yi (clap clap clapclapclap)—and again in the 8th when he made a great defensive play at short. People chanted it on the way home, too. I heard it ringing along Occidental.

It could be seen by some as a “torch passed” moment—to the team if not the journeyman—but we know better: this torch doesn't pass. We'll always care a little more for #24. He was the best I ever saw. 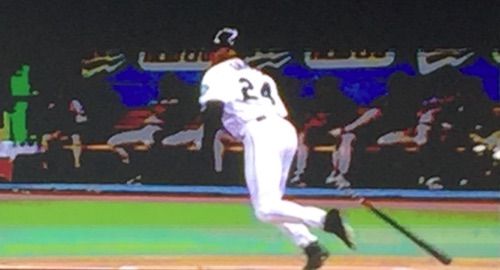