OK, that was a mistake.

Yesterday I posted something nice about Derek Jeter, the man whose FOX-Sports-sponsored leaping and gamboling after another world championship haunted the dreams of every Yankee-hating son of a gun (my brethren) in the late 1990s. It was a first. Me saying something nice about Jeter.

If any of you had someone on your team even a teeny bit remotely like Jeter you would be awash in sentimental plaudits. Face it - he is simply THE BEST!!! GO JETER!! GO YANKEES!

The apparent assumption in the above is that Jeter doesn't get enough attention; that, unlike this MLB poll from a few years ago, he's not the most overrated player in baseball but actually underrated.

There was a phrase I could feel in the back of my mind, forming, but I didn't wait for it to form. I simply responded with a kind of mild amusement under which something else percolated:

Well, in a ranking of career OPS, he's currently ranked 238th, tied with Harlond Clift, and 232 places away from Albert Pujols. But if you want to call that THE BEST, feel free.

That didn't stop it, of course. It escalated it. It led to a discussion of baseball being more than numbers, and how character matters, and how Jeter has character and is a leader, etc. Then this from the Yankees fan:

Because I am SO TIRED of Yankee haters waxing poetic about their own half baked players while viciously tearing down Jeter. I love baseball and any player who plays the game right. I don't respect the ones who don't no matter what team they play for. I grew up in NY and have been a Yankee fan since I was 9 years old. You know it's just jealousy, not rational baseball assessment.

At which point I should‘ve taken a klonopin.

This was a discussion with someone who’s never heard the phrase, “He‘ll look good in pinstripes.” This is someone who doesn’t understand that the true finish to her sentence, “If any of you had someone on your team even a teeny bit remotely like Jeter...” is “...the Yankees would have taken him a long time ago.”

I kept returning to that redundant, under-the-top phrase ...even a teeny bit remotely like Jeter. I thought of Edgar Martinez, a career .300/.400/.500 with the Seattle Mariners who never made the cover of Sports Illustrated. I thought of underrated stars like Paul Konerko, Adrian Beltre, Billy Butler.

Thirty-three comments later, we ended it.

I ended it with the phrase I could feel forming in the back of my mind at the beginning of the conversation. It's what Crash Davis says to the player who stands and appreciates his homerun after being told what pitch is coming:

That was my feeling.

I give you a GIFT and you stand there and show up my Facebook page with your Yankee rantings? Run, dummy!

Elsewhere on FB, another Yankees fan, even before last night's 6-1 loss to Baltimore, was lamenting the state of the team. I checked the standings. They were in first place in the AL East but other teams were within spitting distance. They had the second-best record in the American League but just second best. That's a time of celebration for fans of most baseball teams but a time to lament if you‘re a Yankees fan. Yankee fans have what Louis C.K. refers to as “white people problems.” That’s where your team is amazing so you make shit up to be upset about.

I call the Yankees and their fans the 1% of baseball and they are. As the rich have no clue what it means to be poor, Yankee fans have no clue what it means to be a fan of the Kansas City Royals, or Pittsburgh Pirates, or Seattle Mariners. To develop talent only to see it taken by the Yankees. To have no shot in June, or April, or during the off-season. To have no money, or hope, or banners. They don't realize that this is what we're saying when we say: Yankees Suck. 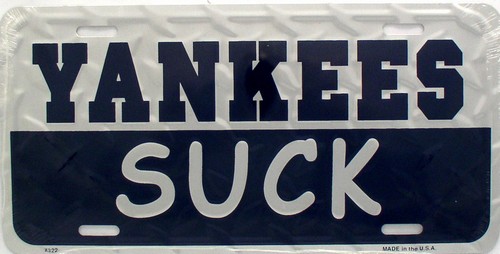