My History of the U-S-A Chant: With a Benediction from Rabbi Shmuel Herzfeld

I'm not much of a fan of chants. On the left we have this old chestnut: “What do we want? X! When do we want it? NOW!”

It didn't used to belong to the right. In the winter of 1980 it belonged to all of us, all of the new hockey fans around the country watching a team of college kids beat the best players in the world, a Soviet machine that had dominated everybody, including U.S. professionals. The Olympics were imbalanced back then, restricted, as they were, to amateurs, to non-professionals, when non-capitalist societies had nothing but. Their players were state-sponsored, trained since infancy, drilled daily, while ours were college kids: 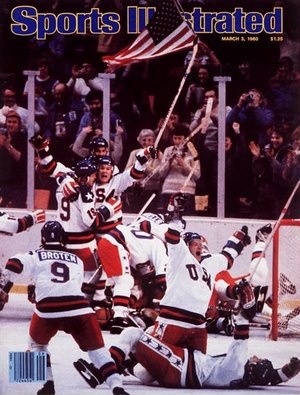 Mike from Minneapolis, Mark from Madison, Mike again from Wintrop, Mass., Neal from northern Minnesota. Guys. As in: Hey, why don't you guys get together and play some games?

I'd followed their run through the Winter Games peripherally but was assuming the worst when, flipping channels one Friday night (literally: hand on the knob, kids), I came across a newsbrief informing us that the U.S. hockey team had beaten the Russians. Immediately I flipped back to the Olympics, to the tape-delayed game, just in time to see Mark Johnson (from Madison) slide between two defenders and flip it in the goal with one second left in the first period to tie it, 2-2. Holy crap! We win this? I watched the rest of the game on tenterhooks even though I knew its outcome, then went out into the night pumped beyond belief. It was an odd sensation. I'd grown up in unpatriotic times, when patriotism was the last refuge of squares rather than scoundrels. I'd watched the country fall apart militarily (Vietnam), politically (Watergate), economically (OPEC, stagflation). We had gas lines and hostages. Now we had this. What was this? It felt good. USA! USA!

Four years later the chant was already the province of louts. In the interim “USA Today” had been published, full of its dull news and patriotic charts, and capitalizing on the acronym “USA” as much as possible. Then we heard it all the time during the ‘84 Summer Games in Los Angeles, which the Soviet bloc, responding to our boycott of the 1980 Summer games in Moscow, boycotted. We weren’t going up against the eastern bloc's professional non-professionals; we were going up against ... Trinidad and Tobago. We weren't underdogs anymore but overdogs, beating our chests and reveling in our expected triumphs. Why chant for that? You'd hear it on the campaign trail, too. Ronald Reagan would reference the Olympics and get the chant going. Eventually the chant became his. And theirs. It turned my stomach.

I thought Homer Simpson killed it in 1993. I really did. There was an episode of “The Simpsons” in which Homer and Marge, driving to a parent-teacher conference, argue over who gets Lisa's teacher (an easy gig) and who gets Bart's (trouble). Homer whines and wheedles his way into getting Lisa's teacher again, and when Marge finally capitulates he does this:

Brilliant, I thought. That's that. They‘ll never be able to use it again.

Wrong. Too many scoundrels in this country. Too many louts. Now we use it to cheer on death rather than college kids.

I don’t know if there is a proper response to bin Laden's death. Mine, as I wrote yesterday, is muted. I'm glad he's gone, glad he was killed in the way he was killed, applaud the men who did it; but I assume someone somewhere will take his place.

I suppose the response closest to mine comes, ironically, from the website of David Frum, the right-wing originator of the phrase “Axis of Evil,” written by Rabbi Shmuel Herzfeld, a man of God 11 years my junior, in a piece entitled “Is it Wrong to Feel Joy at Bin Laden's Death?” Rabbi Herzfeld writes:

First there is recognition that even when our enemy falls, this does not signal an end to all our troubles.  Just because one enemy or one army or one threat has been removed does not mean we are entirely safe.

Second, we must acknowledge that the destruction of the enemy did not necessarily arise from our own merits.  We are perhaps not worthy of the good fortune that we have received and so we do not want to tempt God, as it were, or remind the Angel of Death of our own defects.

At the same time, I can't admonish those who have the impulse to chant “USA! USA!” for the death of the man who perpetrated this. Herzfeld again:

The Talmud tells us that “God does not rejoice with the fall of the wicked.”  As the rabbinic teaching goes, as the Children of Israel were crossing the sea and the army of Pharaoh was drowning, God rebuked the angels for showing excessive joy.

The chanters are in good company. It's the impulse even of the angels.