My “Star Trek” Novel: Fuck-Ups of the Federation

The small, stoic face of Admiral Brush filled the viewscreen in the Captain's ready room. It was an unremarkable face except for its tendency never to crack a smile (it was once said of him that even Benzites had better senses of humor). Now his face looked more impenetrable than normal. Captain Harrison matched it with a deep frown of his own; the vein in the middle of his forehead began to bulge slightly with the effort.

“Admiral, we both known that Admiral Spock is on Romulus attempting to bridge the diplomatic gap between the Vulcans and Romulans. The message must have come from him.” 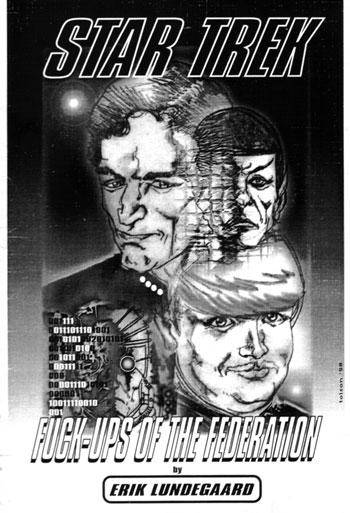 The Captain leaned back in his chair as if to distance himself from this judgment. “How do you figure?”

“Numbers and letters scattered across a universe,” the Admiral replied blandly. “Anything is possible.”

“It's too great a coincidence. A Romulan scout ship destroyed. A dying Romulan's last words about the Borg.” Captain Harrison ticked his reasons off on his fingertips. “The upheavals we are sensing from Romulan space. Now this. An old-fashioned Earth S.O.S. that contains the Starfleet service number of an Admiral we both know is on Romulus. It's too...”

“Yes! It is too coincidental. That's why it can't be a coincidence!”

“Captain. Calm your famous temper. This isn't Ligon II, after all.”

“We are acting now,” Admiral Brush contended. “We are sending all available starships into that sector to monitor the situation. From there they will make a sound judgment based on the available facts.”

“But we still want you out of there and mapping Halkan space.”

“But shouldn't we be here? To inform the others of the situation?”

Admiral Brush nodded calmly. “We have all that information. They have been informed.”

“Get your ship out of that sector, Captain! This is a direct order! It is no place for a bunch of...” His mouth curled in disgust, and with a dismissive wave ended the transmission.

Captain Harrison slumped into his desk chair in deep thought. After Mr. B and Ensign Rodgers entered his ready room, he relayed the conversation to them.

“What do you think it might be?” he asked his Number One in low tones. “Some kind of conspiracy?”

“An alien takeover of Starfleet? Is it possible? Despite the precautions that have been taken?”

“What about a Borg takeover?” Mr. B suggested. “The Admiral's actions would seem to favor the Borg more than anything.”

The Captain nodded his head in thought. “It would explain his stoic demeanor. How he's had it in for me from Day One.”

The conversation between the two was interrupted by a Klingon war cry.

“Glaajin heads!” Ensign Rodgers shouted. “Don't you know? Don't you get it? The Admiral doesn't want us investigating because The Brock is the dung-heap of the Federation! It is where they send their least trustworthy...” He shook his head in frustration. “Think about it! Captain, right before this assignment you had that run-in with Admiral Yamamoto. Commander, you've had a long history of...not seizing command. Me and my drunken battle with Commander Riker. Simon Tarses hiding his Romulan history. A Vulcan more interested in cool than logic. That idiotic Ridlian and his insufferable giggle. An aristocratic doctor who can never concentrate on what matters. Our entire crew is made up of the rejects of other crews! That's why we were sent here! That's why we're on the Brock! Because no one wants us. We don't fit in.”

“The starship of misfit toys,” Mr. B mused.

“Like Captain Picard. He's had experience. He's been with the Borg before. They don't want us near this place. Because they don't' trust us. To them we're the fuck-ups of the Federation.”

Captain Harrison stared off vacantly for several seconds. His insides felt like a star collapsing in on itself. The man who he imagined himself to be was not the man others saw him as; he was used to this, but the disparity between the two visions overwhelmed him now. It all made sense. How come he hadn't realized it before? He was not a rising Starfleet Captain in the mold of a James T. Kirk or Jean-Luc Picard. His position wasn't even as highly-esteemed as that of most Commanders or Lieutenants on other vessels. He had been shunted off. He had been forced onto a dirtier path. He would probably never rise above his current position because those in authority, those who controlled the strings of command, had never liked him, never had faith in him. For one horrific moment he saw himself as they saw him, as a skinny nobody from Nowhere, Arizona, and he shuddered inwardly.

Then with a galactic force of will he threw off these assumptions and reassumed the stance of who he knew himself to be. In the long run, their opinions didn't matter. In the long run all that mattered was what he did. He forced himself to look up at his First Officer.

Just then the Brock was rocked by a blast that threw the Captain backwards out of his chair, and tumbled Mr. B and Ensign Rodgers over the desk. The Captain executed a Vulcan barrel-roll and was on his feet and out onto the bridge in a matter of seconds, followed by the cursing Ensign Rodgers and the confused First Officer, holding onto his overly-large head. The whoops of the red-alert siren resounded around the bridge.

“Status!” the Captain shouted as he took the command chair from Lt. Mann.

“Attack from a Borg scout ship,” Lt. Mann stated. “It decloaked at forty-five degrees portside and then cloaked again. Shields are up and at 72 percent capacity.”

The ship was attacked again.

“Fire phasers at the origin of those blasts!” the Captain shouted.

The phasers fired harmlessly into space.

“Captain,” Lt. Mann warned. “Those shots came from the middle of a heavy concentration of tachyon emissions.”

“The emissions seem to be doing...nothing. They are not...indicating where the cloaked vessel might be.”

“The Borg have adapted,” Mr. B suggested as the Brock was rocked again. “They have figured out a way to hide themselves even from tachyon emissions.”

“Nothing,” Ensign Ciam said as he stared into the main viewscreen. A small giggle escaped his throat.

Another blast; the crewmembers rocked in their seats.

“Ensign,” the Captain commanded. “On my mark, spin the Brock around in a course similar to a gyroscope or a wobbling top. Lieutenant,” the Captain leaned back towards Lt. Mann. “On the same mark shoot all phasers in a spray array. Let's see if we can't nick something.”

“Desperation is sometimes the mother of invention,” the Captain replied.

“Ready?” the Captain asked. He brought his arm down. “Engage!”

Ten seconds into the plan a small explosion in space occurred to the aft side of the Brock.

“Focus all photon torpedoes onto those coordinates, Lieutenant!” the Captain shouted. “Fire! Now!”

A large explosion lit up the viewscreen and a cheer was beginning to erupt from the relieved crewmembers of the Brock when three Borg, impassively fierce and heavily armed, materialized at strategic points around the bridge. Lt. Mann kicked the legs out from one and punched it square in the face as it was falling forward. Ensign Rodgers jumped on the back of another and tore out its eyepiece and disconnected its wiring, shouting all the while. The third Borg fired at the Captain; Harrison leapt from his chair just as it was incinerated, seemed to cover the distance to the Borg in nanoseconds, and his punch was so quick and stealthy that it was only observable after the fact: the Captain in a Zaldan qir-lan stance and the Borg's head rolling around on the floor near the turbo-lift. Blood was splattered against the far wall. Seconds later the Borg's headless body collapsed to the ground, leaking.

“Is everyone all right?” the Captain asked.

Lt. Mann shook his hand; his knuckles were scuffed and bleeding. “Never better.”

Rodgers kicked at the disconnected Borg at his feet. ”Baktag!“

The Captain himself kicked at the remains of his incinerated chair and sat in the one reserved for the Betazoid. ”Status?“

”Minor damage to the forward hulls and Deck 12,“ Will Abelsaan said.

”And,“ Ensign Siler mentioned, ”during the course of the battle we seem to have drifted into the Neutral Zone.“

”A clear violation of the Treaty of Algeron,“ Mr. B mentioned.

”Just what you'd expect from a bunch of screw-ups like us,“ the Captain said, and glanced over at Ensign Rodgers, who smiled and shook his head. The Captain looked at his communications officer. ”Lieutenant. Any word from any other federation starship?“

”Nothing, sir. The Enterprise is still a day away.“

The Captain scratched the slight scruff on his pointy chin.

”What do you recommend, Captain?“ Ensign Siler asked. ”Returning to Federation space?“

The Captain stood up and sighed. ”I'd like to. But unfortunately we can't. Our navigation system has been knocked out. We've lost impulse power. We're just drifting. So much space junk.“

”Radio that message to Starfleet,“ Captain Harrison told Lt. Langley. ”In the meantime,“ he said, staring at the viewscreen, ”let's see what's going on out here."