In “Youth,” Feng Xiaogang’s sweeping tale of a cultural troupe in the People’s Liberation Army in the 1970s, one of our main characters is He Xiaoping (Miao Miao), a young dancer from the provinces with a sad backstory. Her father was reeducated during the Cultural Revolution, and her mother remarried; Xiaoping has since taken her step-father’s name, but he ignores her, and village peers bully her. She’s hoping for better now that she’s in the PLA.

She doesn’t get it. Is it simply first impressions? Mean girls? When she arrives, her clothes smell (it costs to shower where she lived), and she sweats more than the other girls, and, despite her cheery demeanor, she can’t live this down. It doesn’t help that she borrows the military uniform of Dingding (Yang Caiyu) to take a picture to send back home—specifically to her father, to whom she’s loyal, and who isn’t long for this world—nor that she doesn’t own up to it when confronted. There’s also an incident with a padded bra, which is apparently scandalous. Bottom line: She’s “other” in this troupe. She’s mistreated, a punchline. 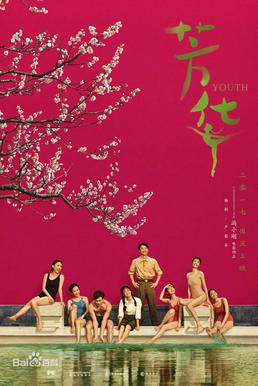 But boy can she dance. And when the group is readying to perform before cavalry officers in the mountains, the lead dancer, as in a classic Hollywood melodrama, injures herself. It’s Xiaoping, the understudy, who is called upon to save the day.

Except by this point she’s done with the troupe—less for the way they’ve treated her than the way they treated Liu Feng (Huang Xuan), a selfless, almost saintly figure, who is kicked out for indescretions. Specifically: He spent years doing good deeds for Dingding because he was hopelessly in love with her; and when he finally confesses this to her, and tries to embrace her, he’s caught (“caught”) and condemned.

So Xiaoping, done with it all, feigns illness to get out of dancing the lead role. Ah, but the political commissar realizes she’s faking, and, in his wisdom, decides to see where she’s going with it. He takes her on stage before the cavalry officers, tells them that she’s sick but has agreed to perform for them anyway. The troops chant her name: “Learn from Comrade Xiaoping!” they cry. The music wells up, and the camera closes in on her, saluting the troops, overcome with emotion.

And then she shows them what she can do.

Except that doesn’t happen. Instead we cut away, and the next time we see Xiaoping she’s working as a nurse on the front lines of the Sino-Vietnamese War. We never get the big dance number the movie seems to be building toward.

It’s even weirder than that. Because the big dance number was actually filmed. It was in the movie when it screened at the Toronto International Film Festival last September. It’s even on YouTube. You can see it here. But it’s not in the movie I saw in downtown Seattle last weekend. And apparently it’s not in the film released in China on Dec. 15.

And what about that release? For a film from Feng Xiaogang, the Steven Spielberg of China, “Youth” had a really rocky time getting before the public. It was supposed to be released in late September, just prior to “National Day,” October 1, but was pulled by the Chinese government at the last minute. There’s an extremely informative article on the background to all of this by Richard Yu on the Cinema Escapist site, but even he doesn’t know why the film was pulled. He simply thinks the politics of the film, such as they are, had nothing to do with it.

So did something happen between when it was pulled and when it was released? Did Feng take some extra scissors to his project? Did someone else?

It’s the real thing
“Youth” is based upon a popular novel by Yan Geling, who was herself a dancer in a PLA troop in the 1970s, then became a journalist during the Sino-Vietnamese War. Essentially she’s Suizi (Elane Zhong), who narrates the film, and who’s part of the troup’s two unrequited love stories. Just as Liu Feng does everything for the shallow Dingding (for naught), so she does everything for the callow Chen Can (Wang TianChen) for naught. The Chinese do love their weepies. They love the scent of bitter almonds.

Me, I love this period in Chinese history. In 10 years, China went from the Cultural Revolution, when a whiff of westernism, let alone capitalism, was enough to be reeducated; to “to get rich is glorious,” when the machinery of capitalism was put into place and began to roar. The movie reflects that leap. The first thing we see is a giant mural of Mao Zedong; one of the last, a giant ad for Coca-Cola.

I admit that when the war started I went, “Wait, what? A Sino-Vietnamese war? In the ’70s?” Turns out it wasn’t much to brag about. The Chinese backed the Khmer Rouge in Cambodia, and when Vietnam desposed them, China took offense and attacked. (Most wars have suspect provenances, but starting one to keep Pol Pot in power has to be at the bottom.) The war lasted a month and cost China between 9,000 to 62,000 lives, depending on who you believe. Here, it costs the ever-helpful Xiaoping her sanity (temporarily) and the ever-selfless Liu Feng his arm (permanently). We do get a lovely scene where Xiaoping’s old troupe performs for the war’s wounded, and she, startled into recognition by the music, winds up outside, dancing on the grass under the stars.

Shortly after, amid tears, the troupe is disbanded. Economic reforms are on the way. Capitalism is on its way.

To get rich may be glorious but it’s not portrayed so here. The people who get rich are the Chan Cans of the world—the opportunists. The Xiaopings and Lei Fengs get screwed again. The last time we see them, they’re huddled together on a train station bench in the mid-90s. Suizi’s voiceover lets us know they remain together, unmarried and without children, and show up at a reunion in 2016. But she says she won’t show us those scenes. She says it’s better to remember everyone as they were when they were young.

These days are ours
This is the second international film in the last three years to use “Youth” for its English language title—after Paolo Sorrentino’s 2015 film—and there's some interesting differences between the two. Most obviously, the western film focuses on the aged (Michael Caine, Harvey Keitel), while the Eastern film on the young (to the point of casting unfamous actors in the leads, and not showing us how they aged). It’s the opposite of how we perceive each culture: the west discards its aged, the east reveres its elders. I hope China doesn’t give up on that as it moves to the center of the world stage.

Overall, I enjoyed “Youth”—I was certainly swept up by it—but there’s a big disconnect that isn’t addressed. On some level, we’re all nostalgic for our youth, as is our narrator, Suizi, as is the film itself. Which means she/it yearns for this troupe, full of mean people, and this period, the Cultural Revolution, a time when society was upended, education reviled, priceless artifacts destroyed, and millions of lives ruined. Not exactly “Happy Days.” Not even “That ’70s Show.”