There’s a lot of in-jokes in this thing, winks to the franchise and its fans, that don’t make much sense given its timeline. Right: timeline. There are different timelines to “X-Men” movies now. We should be handed Playbills before entering the theater. Charts should be set up in lobbies. Professors should give lectures.

This is how I believe it goes. The first three “X-Men” movies are on the same timeline, but director Brett Ratner screwed the pooch with the third one by killing nearly everyone: Prof. X, Jean Gray, Cyclops. So the next two movies, “X-Men Origins: Wolverine” (2009) and “X-Men: First Class” (2011), were prequels, while the most recent “X-Men” movie, “Days of Future Past” (2014), created an alternative timeline in an attempt to retcon the shit out of Ratner’s shit. 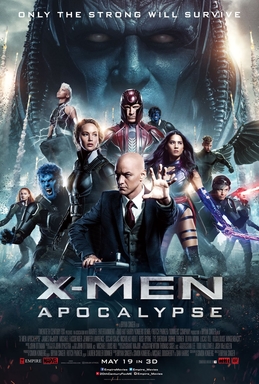 In “Days of Future,” Wolverine goes back to 1973 to stop a minor incident (the hush-hush assassination of an anti-mutant scientist) and unleashes a major one: the outing of all mutants in Paris and the near assassination of Pres. Nixon on live TV by Magneto (Michael Fassbender), who wrecks both RFK Stadium and the White House in the process. But Mystique stops him, showing there are good mutants, and thus humans become less fearful and less likely to create anti-mutant machines in the future.

Right. Because if there’s one “good one” in a group of scary people, everyone automatically trusts all of them. Cf., for counter examples, the whole of human history.

A long time ago
Anyway, we’re now on a timeline in which mutants have been outed in 1973. Here’s the thing: This knowledge doesn’t seem to change much. Ronald Reagan is still elected president in 1980, probably meaning Jimmy Carter in ’76, probably meaning Nixon was still impeached in 1974. A being lifts RFK Stadium and drops it like a ring around the White House, yet the Watergate scandal still tops headlines in the summer of ’73? It’s like a Bizarro version of the Butterfly Effect: Magneto’s shit storm in D.C. doesn’t affect a butterfly flapping its wings in Asia.

Oh, and it doesn’t affect George Lucas’ story ideas, either.

This a petty complaint but hear me out. Before the shit goes down in “Apocalypse,” which is set in 1983, new Xavier Academy students Scott Summers (Tye Sheridan, looking disturbingly like Andy Sandberg), Jean Grey (Sophie Turner of “Game of Thrones,” ubiquitous actors these days), Kurt Wagner (Kodi Smith-McPhee) and Jubilee (Lana Condor) all go to the mall. It’s an odd moment. The introverted Scott suddenly becomes extroverted to get everyone there—to show Kurt this newfangled thing called a “mall.” (Fact-check: they’ve been around since the 1950s.)

The real purpose—for the plot anyway—is to get the kids away from Xavier Academy when it’s attacked, so they won’t be taken hostage like the others. The other purpose is a wink. We see our superteens walking out of a mall theater where “Return of the Jedi” is playing and get the following conversation:

Jubilee: I’m just saying “Empire” is still the best. It’s the most complex, the most sophisticated. Wasn’t afraid to have a dark ending.
Scott: Yeah, but come on, if it wasn’t for the first one you wouldn’t have any of the rest of the movies.
Jean: Well, at least we can all agree the third one’s always the worst.

Ha ha. Get it? It’s for X-Men fans who hated the Ratner movie (which was truly awful), and maybe a self-effacing acknowledgement that this movie, too, the third of the prequels, will get slammed. Ha ha.

Except it got me thinking. In their world, in 1973, everyone becomes aware that there are creatures so powerful they can control our minds with theirs. And George Lucas still creates a movie with something called “the Force”? And Americans still flock to see it even though it’s no longer wish-fulfillment fantasy but a very scary part of their own reality? Really?

Plus the first “Star Wars” is obviously the best because it actually has an ending. “Empire” is just “to be continued,” and that’s not a movie.

Hope that’s the last we see of that guy.

Ha ha. Get it? Cuz Wolverine will become his future rival for Jean’s affections. But that’s just the first timeline, right? Or does love transcend timelines? And does that mean poor Scott Summers is doomed to play third fiddle throughout eternity while Jean and Logan forever burn for each other? Rough role, dude.

But enough with the timelines. There’s worse stuff.

Ladies and gentleman, we are now seeing the beginnings of another stage of human evolution.

This movie upends that. Turns out the most powerful mutant of all, Apocalypse (Oscar Isaac), who can transfer his being from one body to another, accumulating powers as he goes, was an Egyptian ruler, En Sabah Nur, in ... 3,600 BC. So much for “now.”

In 1983, spy shenanigans by CIA agent Moira Mactaggert (Rose Byrne, last seen in “First Class) wakes up ol’ En Sabah, who recruits, in quick fashion, young versions of Storm (Alexandra Shipp), Angel (Ben Hardy), Psylocke (Olivia Munn), and Magneto, who’s been living for the past 10 years as a Polish steel worker. Prof. X (James McAvoy) uses Cerebro to try to find Apocalypse, but Apocalypse discovers him instead, and kidnaps him, and is going to transfer his essence into Xavier’s body, after which this new Apocalypse will destroy the world in order to see what rises out of its ashes. Because apparently having four billion slaves is a bore. But rubble—that’s entertainment!

This transference is being done within a newly constructed pyramid in the rubble of Cairo, while, outside, for the zillionth time, good mutants battle bad ones. They also try to turn them toward the good side. And this is where we get another goddamned “Return of the Jedi” moment. Rip off or homage, you decide.

Remember how long it took Darth Vader to turn from the dark side and attack the Emperor, and thus save his son, Luke, in “Jedi”? And how boring that was? That’s Magneto here. He even has a long-lost son to save— Quicksilver—but it takes him forever to switch sides. We all know where it’s going but the filmmakers draw it out. As if waiting for the obvious makes the obvious exciting.