Given the negatives the movie had to work with, it wasn’t bad. Gal Gadot and Chris Pine saved it. But it wasn’t all that.

What are the negatives, you ask? 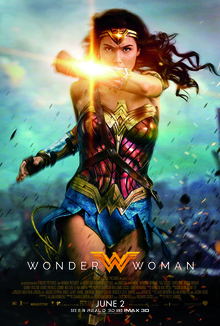 Director Patty Jenkins (“Monster”) and screenwriter Allan Heinberg (“Party of Five,” “Sex and the City,” “The OC,” “Grey’s Anatomy”) don’t solve the negatives. They just kind of smudge them a little.

Plot killer
I was in Europe when “Wonder Woman” opened, but of course I was aware of the buzz, the positive reviews, the 92% rating on Rotten Tomatoes. Friends on social media raved: More like this! I took it all with a grain of salt but I still took it. Are high expectations problematic? If they are, let me temper yours.

First, the island. At least the Amazon warriors feel like real warriors rather than pretty girls walking around in flouncy outfits. At least the casting isn’t bad: Robin Wright, Connie Nielsen. But it’s still boring. Doesn’t help that Diana’s mom (Nielsen) knows only extremes. “No, Diana, you can’t train to be a warrior.” “OK, sure, train her, but train her harder than anyone’s ever been trained.” “No, Diana, you and Steve Trevor (Pine) can’t leave the island.” “OK, sure, go ahead, but you can never, ever return.”

For some reason, Mom also keeps Diana’s origin—that she’s the daughter of Zeus—from her. She’s a demigod like Hercules. Why the secret?

The answer requires backstory. Way back when, Zeus created humans. Then Ares, the God of War, made them, you know, the fuckups that we are, forever fighting. In response, Zeus created Amazons, warrior women to police the idiocies of man, but in response Ares killed all the other gods. So Zeus battled Ares himself—a bit late, really—and somehow “struck him down” without killing him. In the process, Zeus died, but he left the Amazons a “God Killer” to slay Ares when he returns. Throughout the movie, Diana (Gadot) assumes the God Killer is the sword housed in a temple on the island. Nope. It’s her. She’s the God Killer. And that’s why...

Wait, couldn’t her mother tell her she’s the daughter of Zeus without letting her know she’s the God Killer? And since she is the God Killer, why object to warrior training? Because Mom doesn’t want to lose her baby? Doesn’t that defeat Diana’s purpose? Not to mention the Amazonian one? Seriously, if the Amazons are supposed to police the idiocies of man, why the hidden island where they spend day after day, year after year, century after century, training? For what exactly? And if Steve Trevor can crash-land near the island, and the Germans can storm the beach, what exactly is preventing Diana from returning? Worse is the fact that this origin story proves to be true; Ares confirms it. Which means in the DC extended universe—the movies with Batman, Superman and the Flash—human beings are the literal creations of Zeus. Our origin story isn’t Judeo-Christian, it’s not evolutionary Darwinism; it’s ancient Greek. Shouldn’t the usual right-wing nutjobs be out protesting this? Martin Scorsese gets shit but Zack Snyder gets off scot-free?

Seriously, every attempt at solving the negatives in Wonder Woman’s origin just seems to lead to more negatives.

Mushy
Here’s another reason why Diana’s mom shouldn’t have kept her in the dark, but it requires another backstory—a cinematic one.

In certain ways, “Wonder Woman” is similar to the 1978 superhero movie that started them all, “Superman” starring Christopher Reeve, in that our title character is both an innocent abroad and straight man/woman for the duration. In “Superman” the humor comes from Lex Luthor and his minions, and the cynicism from Lois Lane. It’s 1978 but Superman believes in our institutions; he believes in truth, justice and the American way. He also knows everything; he’s been educated. He’s innocent but smart.

Diana is the straight woman here—Pine provides the laughs—and she’s innocent, like Supes, but she’s not smart, she’s not educated. Sure, she knows every language but nothing of cultural mores or history. This leads to humorous bits—she doesn’t know flashing leg in post-Victorian England ain’t cool, for example—but doesn’t it diminish our hero? And what does it say of Amazon’s schooling? Are they paying any attention to the outside world?

The movie does improve considerably once Chris Pine shows up for beefcake/comic relief. Even better when we get to London and add his secretary Etta (Lucy Davis, Dawn of the original “Office”). They have good interplay. Of Capt. Trevor’s sidekicks, I liked Sameer (Said Taghmaoui of “La Haine”), could’ve done without the drinking, singing, unable-to-shoot Scotsman Charlie (Ewen Bremner), and kind of rolled my eyes when the Native American, The Chief (Eugene Brave Rock), shows up. But this is the team that goes to the front to confront the movie’s villains, Gen. Erich Ludendorff (Danny Huston), whom Diana suspects of being Ares, and the supercreepy poison-gas specialist Dr. Isabel Maru (Elena Anaya), who, in the midst of an Armistice promoted by England’s Sir Patrick Morgan (David Thewlis), is developing a poison gas that will win the war for Germany.

I’ll cut to the chase. Wonder Woman kills Ludendorff with the God Killer sword but it doesn’t stop the war. Everything continues. Man is corrupt, and for a moment she looks like an idiot. But then the real Ares appears—shock, Sir Patrick Morgan!—who crushes the sword, taunts Diana with revelations, toys with her as they battle, but ultimately is destroyed. The weapon we see in the first act—the powerful force generated when Diana clangs her bracelets together—goes off in the third, and it saves the day. This doesn’t stop man’s warlike tendencies either, though it goes unremarked all the same. I guess Diana is less innocent by this point.

The ending is mushy. Not as in “romantic,” as in “without clarity.” Throughout, Diana’s raison d’été is clear-eyed: Kill Ares, stop all wars. Capt. Trevor is good, the Germans are bad. By the end—even though Trevor is good and the Germans are bad—she realizes Steve, and the U.S. and its allies, are part of humanity’s problem, too. For a time she rejects him. But when he sacrifices himself to save thousands, she cries to the skies—like Supes in ’78—and then tears Ares a new one.

And her philosophy after all this? That’s the mushy part. The movie has to thread an impossible needle: give her a reason to be inactive throughout a horrible century without condemning all of humanity in the process. Here’s what they come up with: She decides that fighting doesn’t stop wars; only love stops wars. So she stops fighting to do something else. Like work a desk job in a secret room in the Louvre.

I used to want to save the world: to end war and bring peace to mankind. But then I glimpsed the darkness that lives within their light. I learned that inside every one of them there will always be both—the choice each must make for themselves—something no hero will ever defeat. And now I know that only love can truly save the world. So now I stay, I fight, and I give, for the world I know can be. This is my mission now. Forever.

Or at least until “Batman v Superman.”

Fetishes
As I said, Gadot makes a fantastic Wonder Woman. She’s just a glory to behold even when she’s standing there: strong and tough and lovely. I laughed-out-loud when she threw a bully across a tavern and Sameer said, “I am frightened and at the same time aroused.” Raise a glass.

I also like her sprint across “No Man’s Land”—and the obvious pun therein—and her battle in the small European village, including 1) that slow-mo moment when she crashes with a German soldier through a second-story window, and 2) when she appears atop a demolished town-square clocktower, to cheers, after taking out a German sharpshooter.

But the above problems. Wonder Woman was created by a man with a bondage fetish (William Marston, Ph.D.), and her cinematic origin was switched to WWI by a man with a Great War/bustier fetish (Zack Snyder), and it’s tough for Jenkins and company to overcome all of this. In a way, Jenkins’ task is similar to Wonder Woman’s. Men created this shitfest and now a woman has to clean it up. Given that, Jenkins doesn’t do poorly.