It’s got a great open. I’ll give it that.

In a single shot, we see Somali pirates attack a freighter, the panicked faces of the crew, and then, moving with grace and purpose, there’s our hero from the first “Wolf Warrior,” Leng Feng (Wu Jing), diving into the water, upending the hijackers’ inflatables and fighting and defeating them underwater before he—and this is still one shot, by the way—pulls himself into one of the remaining inflatables, grabs a rifle and picks off the lead hijacker (who’s aiming at him) with a crack shot from a hundred yards away. Cue credits.

Then it gets stupid fast.

I don’t mind the overt nationalism, the literal flag-waving, the Chinese businessman who dismisses his Chinese citizenship only to cling to Leng Feng and that very citizenship once the bullets start flying.

No, it’s the racism, stupid.

Not your typical travelogue

In case you haven’t been following Chinese box office receipts (most westerners), or reading this blog (ditto +), “Wolf Warrior II” is the movie phenomenon of the year. Last year, Stephen Chow’s “The Mermaid” shattered Chinese box office records by bringing in $526 million, which was a startling, tough-to-beat amount. But this shattered that. In China alone, it grossed $852 million. Add the $20 million it made abroad, and “Wolf Warrior II” is the first Chinese movie—hell, the first non-Hollywood movie—to enter the list of the top 100 movies in terms of worldwide gross. It does for the movie business what Leng Feng does for geopolitics: Makes a stand for China.

The first “Wolf Warrior,” which came out in March 2015 and grossed a respectable-ish $80 mil or so, was all about border security and protecting the homeland. “Don’t even think of going back when you break into China!” Leng tells the movie’s villains. This one is about protecting Chinese nationals abroad. The movie may revel in explosions and violence amid a bloody civil war and an Ebola-like disease in a fictional coastal African nation—things that normally put one off travel—but it ends with a shot of a Chinese passport and this message:

“Citizens of the People’s Republic of China: When you encounter danger in a foreign land, do not give up! Please remember, at your back stands a strong motherland.”

China literally means “center country” (jung guo), as in “the center of the world,” and once upon a time it expected the world to come to it. No longer. Its official message now is the message of “Scarface”: The world is yours.

The last time we saw Leng Feng, he was triumphant and chatting up his superior officer/girlfriend, Long Xiaoyun (Yu Nan). So what’s he doing alone on a freighter off the African coast? The backstory comes sepia-toned.

That’s why Africa. His search for the killer has led him here. Shame. The Chinese don’t do Africa, or black people, particularly well.

In this fictional country, Feng is godfather to a fat African kid, Tundu (Nwachukwu Kennedy Chukwuebuka, making his film debut), who is both li’l rascal (selling bootleg porn), and pudgy comic relief (forever interested in food). When the bullets fly, and Feng goes above and beyond to get him to the safety of a Chinese warship, Tundu runs down the plank crying for him mom, who’s stuck in an inland city. Feng promises to bring her back, setting in motion the rest of the movie. Later, Tundu sees his mom via Skype, and cries. He cries while eating. He’s got a big bounty in front of him, courtesy of the Chinese, and he’s both crying and stuffing his face.

But that’s not close to the worst of it. Here’s the worst of it. More than halfway through, in the quiet after a battle, Feng and He Jianguo (Wu Gang), an old, wise, former career soldier, watch as the Africans celebrate another day of living by lighting a bonfire and dancing. “Our African friends,” says He. “Once they’re around a bonfire, they can’t help themselves.”

While the movie is obtuse in its racism, it’s concise in its anti-Americanism—although with an odd corresponding need for western approval. Sure, the movie’s villain, Big Daddy (Frank Grillo), goes out in a blaze of racist glory (“People like you will always be beaten by people like me” he says to Leng Feng), but first he has to give grudging admiration: “I guess the Chinese military isn’t as lame as I thought,” he sneers. Ditto Leng Feng with the U.S. military. The female lead, feisty American girl Rachel Prescott Smith (Hong Kong actress Celina Jade), mistakenly thinks the U.S. will come to her rescue. “You think the U.S. Marines are the best in the world?” Leng Feng asks her. “They may be, but where are they now?” The point is we lack spirit. We cut and run. China doesn’t. They steam into port while we flee.

Except ... our Marines may be the best in the world? Under the circumstances, that’s kinda sweet.

Yo, Adrian
If you can get past the racism and the geopolitics, “Wolf Warrior II” is your typical action-adventure, with an indestructible hero, near-indestructible villains (including 6’ 6” Ukrainian martial artist Oleg Prudius), and tons of explosions. The spoiled soldier redeems himself while the hectoring middle manager doesn’t. Leng Feng’s original goal—rescuing Tundu’s mom—keeps growing, as he’s responsible for more and more civilians, in worse locations, even as the bad guys close in. Oh, and it turns out Big Daddy is the one who uses striated bullets. Shocker.

Comparisons to mid-80s Stallone are inevitable. Like Rambo in “Rambo II,” Leng fights for his country’s honor abroad; he rectifies past wrongs and imagines future greatness. Like Rocky in “Rocky IV,” he drapes himself in the flag. Leng literally wears it on his sleeve so his rag-tag group of Chinese nationals and African locals can safely drive through a war zone. “Hold your fire!” the African soldiers shout. “It’s the Chinese!”

So what does it all mean? Why did the ultra-patriotic “Wolf Warrior” do meh box office while this one went gangbusters? Because sequels do better than originals? Because “I” was local and “II” international? Because “I” was released when Obama was president and “II” came out during the first hot, idiot summer of Trump?

Maybe the better question is this: When will Chinese movies begin to do better internationally? They’ve already got the production values, the tropes, and the explosions of Hollywood. What’s missing? A white face? But that doesn’t explain the international popularity of stars like Dwayne “The Rock” Johnson or Will Smith. Does the movie contain too much nationalism? Or maybe the wrong kind of nationalism? Almost anyone can imagine themselves American, after all, but only the Chinese get to be Chinese.

That’s one of the great ironies about “Wolf Warrior II”: The movie about Chinese power abroad is really only powerful at home. But make no mistake: There’s a lot of power there. 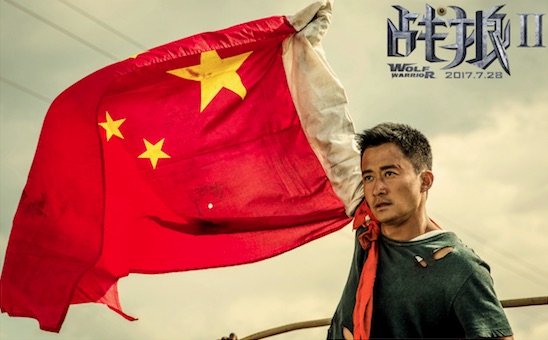