Frank Costello, the Irish mob boss with FBI ties played by Jack Nicholson in Martin Scorsese’s Academy-Award-winning film “The Departed,” was based, in part, on James J. “Whitey” Bulger, who ran the Winter Hill gang in South Boston from the 1970s until his disappearance, just before indictment, in 1994. He was finally captured in southern California in 2011 and put on trial in 2013. The 33 charges against him included 19 murders.

Here’s something I began to ask myself as I watched Joe Berlinger’s documentary “Whitey: United States of America v. James J. Bulger”: Is this a better movie than Scorsese’s Academy-Award-winning film? 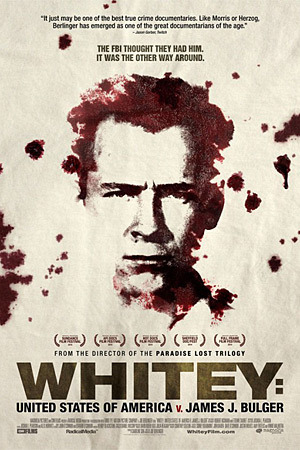 An argument can be made.

For one, there are more twists in the real-life version. Sure, “The Departed” was about a cop who infiltrates a gang and a gang member who infiltrates the cops, and how they meet and fight. But this?

Was he or wasn’t he?
The doc opens with Stephen Rakes, a tough-looking, 50ish guy recounting his encounter with Whitey Bulger 30 years ago. Back then, Rakes opened a liquor store in south Boston and it was going good. Then two guys showed up at his doorstep, Bulger and Kevin Weeks; they said they were there to kill him. But he could save himself—in front of his young daughters, who were milling about, unaware of the situation—if they gave them a partnership in his liquor store. He refused. They got mad. Rakes could see the killer in Bulger’s eyes. “We’re taking the fucking liquor store!” Bulger told him. It unmanned Rakes, this encounter. It changed his view of the world and his place in it.

We meet more victims, and the families of victims. Tommy Donahue, whose father Michael was allegedly killed by Bulger, greets the press on the first day of Bulger’s trial: “I’ll see yas when I get out.” Steve Davis, friends with Rakes, talks to Berlinger about the death of his sister, Debra. “They took her teeth out,” he says quietly. “Her hands.”

So at this point we think the story is about whether justice will be done. But that’s not the story. Bulger isn’t even contesting some of the charges at the trial. In fact, the main thing he and his defense team are fighting isn’t even a charge, really. It’s background information: the fact that for years Bulger was an informant for the FBI.

Bulger says he was never an informant for the FBI.

So what, right? He has nothing left but his reputation so he’s trying to salvage that. Basically he’s doing the opposite of James Cagney’s Rocky Sullivan in “Angels with Dirty Faces.” Rocky pretended to be yellow so kids would stop looking up to him. He besmirched his rep for the greater good. Bulger is besmirching others for his greater good. Right? Because there’s a 700-page FBI file on him with all the info he gave to agent John Connolly. Facts are facts.

Until they’re not. Most of the info in his file you could have gathered 100 other ways, his defense team says; it’s not specific to Bulger’s insider knowledge. Plus an expert implies that 700 pages over 20 years is nothing; she expected it to be 60,000 pages or 100,000 pages.

Could Connolly be lying? He’s in jail now, convicted of racketeering and obstruction of justice. Could Bulger’s partners have been the finks and Bulger’s name got mixed in because it made the FBI look good—that they landed this top guy? Could Bulger be lying?

So many fingers get pointed at so many different people it’s like a John Woo gun finale without the guns. Ultimately, one gets the sense that, yeah, there was a mutually beneficial relationship between the FBI and Bulger that didn’t produce much except smoke. One wonders what the FBI was hoping. That Bulger would help them bring down the Mafia? How much protection did they give him? How often did they look the other way? How many people would be alive today if they hadn’t?

One agent who tried to brush away the smoke, Bob Fitzpatrick, wound up getting canned in the early 1980s—and then besmirched by the prosecution in the 2013 trial. It’s implied that he was just looking to get ahead when the evidence suggests the opposite. The others were doing this. To quote “The Departed,” he was the guy doing his job.

Question marks
There are a lot of loose ends in “Whitey,” but none more bizarre than the fate of Stephen Rakes, who waited 30 years to confront Bulger in a courtroom but was dismissed as a prosecution witness before being called. A few days later he went missing. A few days after that, he was found dead in the woods: poisoned. Bulger? His friends? The Feds? The fuck?

For all the question marks we’re left with, though, Boston Globe columnist (and talking head) Kevin Cullen feels we’re not left with enough. He feels that Berlinger, and the doc, buy too readily Bulger’s protestations that he wasn’t an informant:

The film ignores much of the overwhelming evidence in the public record, and the resulting impression is so guileless and sympathetic to Whitey as to be disingenuous.

Sympathy? I think that’s overstating it. Your revulsion for Bulger never leaves you. In the case of United States of America v. James J. Bulger, there’s no doubt that the latter is guilty. What the doc reveals is that the former isn’t exactly innocent.