Rob Garver’s “What She Said: The Art of Pauline Kael” is a mostly laudatory documentary, with many of Kael’s fans and friends and relatives among the talking heads. So why did I like and respect her a little less afterwards?

I didn’t know about the Paulettes, for example. I mean I knew there were young critics she championed, and who emulated her idea about what makes a critic great; but I didn’t know she actually tried to rally them toward her opinion of a film. That’s some bullshit. That’s PR and propaganda. But of course she thought a true critic was a propagandist, and anyone who didn’t act accordingly wasn’t a true critic. Good god. Imagine. There’s way too much fucking propaganda in the world already. Just say what’s true and get off the stage.

Taking stuffing out of Straw 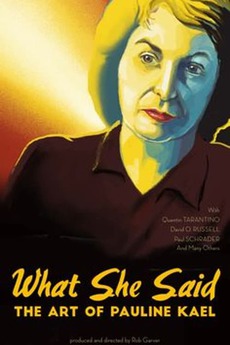 Then there’s the auteur controversy. In 1963, Kael helped make a national name for herself by tackling Andrew Sarris’ article on, and love of, the French auteur theory, disparaging the notion, the academic stuffiness of it all, and Sarris himself. I should read the piece someday—the back and forth of it. According to Richard Brody—with whom, I have to add, I rarely agree—she got a lot wrong. For one, she thought most directors labeled auteurs came out of tough-guy genres like film noir. She wrote:

Can we conclude that, in England and the United States, the auteur theory is an attempt by adult males to justify staying inside the small range of experience of their boyhood and adolescence—that period when masculinity looked so great and important but art was something talked about by poseurs and phonies and sensitive-feminine types?

Not only is this factually wrong (Minnelli, Sirk and Ophüls were also labeled auteurs early on), but it just feels wrong. She’s basically saying men are trying to prove their manhood by championing the word auteur.

More, as the documentary delineates, she disparaged auteurism even as she spent a career touting auteurs: Peckinpah, Scorsese, Altman, Godard, De Palma. Most of these guys were macho, too. Her above description on teenaged masculinity could fit every Sam Peckinpah movie.

What the doc misses is that she didn’t exactly champion everything by a favorite director. She was no auteur whore. I’ve always loved this opening from her 1972 review of Altman’s “Images”:

Robert Altman is almost frighteningly nonrepeititve. He goes out in a new direction each time, and he scores an astonishing fifty percent—one on, one off. M*A*S*H was followed by Brewster McCloud, and McCabe & Mrs. Miller has now been followed by Images. I can hardly wait for his next movie.

The doc treats her as an absolutist, full of hyperbole, and misses the balance in her reviews. That’s the toughest thing for a critic to do, really. It’s easy to love or disparage a thing (particularly disparage a thing), but to delve into it and sort the bad from the good takes work. Look at her take on Peckinpah’s “Straw Dogs.” I loathe it, she likes it, but she’s not blind to its faults. She actually nails Peckinpah better than the people who loathe him:

It’s a work of integrity, but it’s not a work of major intelligence. ... [Machismo] has been the obsession behind most of Peckinpah’s other films; now that it’s out in the open, his strengths and follies are clearly visible. His intuitions as a director are infinitely superior to his thinking.

Was she mean? God, yeah. She attacked director David Lean in person and made him think about giving up movies—because she disliked, of all films, “Lawrence of Arabia.” (She thought there was too much of T.E.’s masochism and not enough on the British scholar.) She never had a kind word to say about George Roy Hill or Robert Redford. She never held back. You know the punch Ali never threw against Foreman? Kael threw it all the time. She wanted bodies on the canvas and blood on the walls.

Was she an opportunist? Apparently she sometimes waited on a review, sussing out the critical norm before blasting in from an unexpected angle. At the same time, we’re told, she reviewed and lauded “Last Tango in Paris” before it had any critic’s screenings; she paid for her ticket and saw it with the New York film fest crowd. Her review helped make the movie.

#SheToo?
At this point, given “Last Tango”’s revisionist problems, I expected to get into sexual politics, the #MeToo of it all, but the doc doesn’t go there. It mentions she liked movies with sexual violence—where men are strong and women are subjugated—but it doesn’t go further. One of the talking heads even suggests she would’ve thrived in the modern age, with her bon mots transformed into tweets. Seriously? Her reviews were essays. She liked to go on and on. She wanted room and modern print doesn’t give you room—let alone Twitter.

I think she would’ve hated social media. It was her voice that mattered. All those others clawing at her? She would’ve been horrified. Plus, I gather, the #MeToo folks would’ve seen her as the enemy, and vice-versa. The doc treats her as a feminist icon—the lone woman in the room where it happens—but she never seemed much for movements. Let alone hashtags.

For all the problems I had with “What She Said,” I’d see it again—if only to immerse myself in a period when writing and film mattered; when there were adults in the room, arguing about adult things.