The most original thing about Lee Sang-il’s “Unforgiven,” which at times feels like a shot-for-shot remake of Clint Eastwood’s 1992 Oscar-winning western, is the character of Goro Sawada (Yuya Yagira), who is more dynamic and memorable than “The Schoefield Kid” (Jaimz Woolvett) in Eastwood’s version. 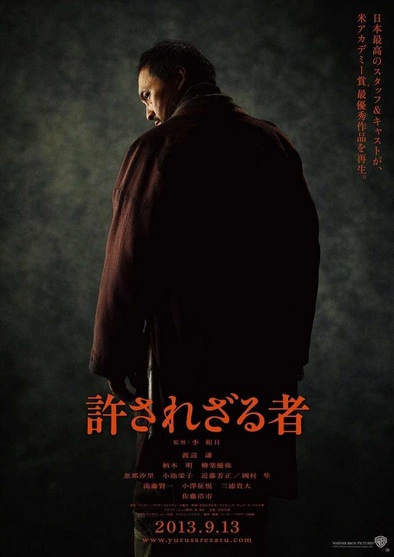 He jumps, shouts, scratches his beard, and grunts similarly. And just as Kikuchiyo was with the samurai but of the farmers, having come from peasant stock himself, so Goro Sawada is with Jubei (Ken Watanabe) and Kingo Baba (Akira Emoto), former Samurai in the 13th year of the Meiji restoration, even if he is actually Ainu, a native of the island of Hokkaido, where the action takes place and the movie was filmed.

It’s as if The Schofield Kid had been Native American. Which, to be honest, might have been an interesting choice.

There are other, subtle differences between the two movies, of course, including using the hero’s drinking less effectively. Plus the villain isn’t building a house as Hackman’s was. Instead of the end of the Civil War (1865) we get the end of the Shogunate (1868). We also lose—or lose in translation—some of my favorite lines: “Deserve’s got nothing to do with it,” and “We all got it coming, kid.”

Otherwise, it’s pretty much the same. A whore laughs at a dude’s penis, a whore is cut, a reward goes up. An aged hero and his aged sidekick decide to go for it. Before they get there, another man, a good samurai, tries, and gets his ass kicked. Our aged heroes are joined by a kid who doesn’t get it, arrive in a town that doesn’t want them, and the hero, sick with the flu, barely makes it out alive. Afterwards, he and the kid kill one of the guys who cut the whore, but his aged sidekick is captured and killed. Leading to ... You know.

So the big question with Lee Sang-il’s “Unforgiven” is: Why bother? I didn’t find an answer to that. Lee doesn’t improve upon Eastwood. Might as well remake “Seven Samurai.”