“Truman,” winner of five Goya Awards, including best picture, director, actor, supporting actor and original screenplay, may be the most charming movie about death I’ve seen.

It’s “My Dinner with Andre” if Andre were about to die, and the story were spread over four days in Madrid (and Amsterdam) rather than one night in Manhattan. Death hovers close, but it’s handled with a wistful shrug. It’s the asshole in the room, and the other two combat it with a shared secret and a twinkle in the eye. 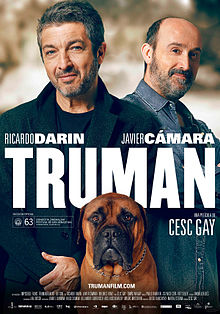 Few do that twinkle better than Ricardo Darin, the Argentinian actor of “El secreto de sus ojos,” who plays Julián, a theater actor, who has decided to bypass the latest round of chemotherapy and accept his fate. Now he’s working out the details, including finding a home for his beloved bullmastiff, Truman, who is named—one assumes from his wall art—after Truman Capote. Is there a double meaning in the title? Not just the dog but Julián? The movie’s True Man? I know: the movie’s in Spanish and the pun is in English. Still.

‘Yes, you did’
I always want to be wondering in movies and “Truman” has us wondering from the start. Who is this guy? Where is he? Minnesota? Canada? I thought this was a Spanish movie. Where is he traveling and why?

He’s Tomás (Javier Camara), going from Canada back to Madrid to visit his friend Julián and possibly talk him back into chemotherapy. Well, that’s what Julián’s cousin, Paula (Dolores Fonzi, hot), hopes.

But after an early effort goes poorly, Tomás more or less drops the subject. He’s an agreeable sort and why waste the four days? The last days they’ll be together? Early on, Julián turns to Tomás and tells him what he loves about him: that he does the favor for the favor; he doesn’t expect payback. Tomás nods and accepts this. Then, beautifully, Julián asks, “So what do you like about me?” Tomás struggles at first, then answers from the heart; and the answer is in the way the question was asked: It’s Julián’s straightforward nature.

The exchange resonates throughout the movie as we see Tomás paying for almost everything (and expecting nothing in return) and Julián confronting not only death but the people around him. A couple he knows from the theater ignores him at a restaurant—because death: icky—but he can’t ignore them. He greets them at their table, and when the man says he didn’t see Julián, Julián responds, without heat, “Yes, you did.” Here’s what I love: Later that day, Julián, too, ignores a man at a restaurant. (I know: a lot of restaurants—it’s Madrid.). Years before, Julián schtupped the guy’s wife, so Julián doesn’t want to deal with him. But the man has a lovely new fiancée, he’s forgiving, c’est la vie. There’s still some hurt in his face, but their conversation is grown-up and rooted in the knowledge that life is short.

Terminal cases
I think I probably got most emotional when Julián leaves Truman with the lesbian couple so their adopted son can “try him out.” The look on Truman’s face, and on Julián’s: neither wants this. Pets always kill me because we can’t tell them why things are happening; we’re left with the emotional component. We’re as helpless as they are. A close second: the good-bye from Julián’s son, Nico (Oriol Pla, hot), in Amsterdam. Julián was unable to tell his son that he was dying, but the hug let us know that Nico knew.

We anticipate a lot of the third-act stuff: Paula and Tomás sleep together; Tomás takes Truman back to Canada with him. I didn't mind guessing all this. There's an inevitability to things. Watching, we feel our own inevitable deaths on a deeper level while being reminding of what makes life worth living.