Is there anything more boring than two people in love? Who are so into each other that the rest of the world, including you and me, fall away? Cease to matter? I mean, dramatically speaking, the point of the love story is to keep the lovers apart for as long as possible. Because when they’re together? Ick.

Terrence Malick doesn’t do this. He begins “To the Wonder” with the lovers together, and in love, and in fucking Paris for fuck’s sake. He begins at the top of the heap. He begins with them heading out to Mont Saint Michel in Normandy off the coast of France. It’s a beautifully constructed island and that’s what they are. 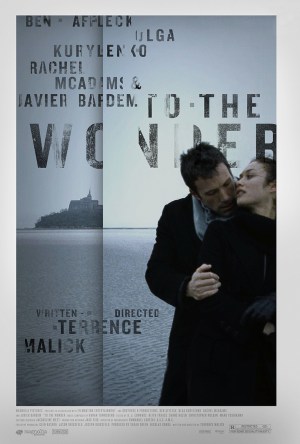 These are the first words we hear, in French, from the unnamed Russian/Parisian Marina (Olga Kurylenko), who is in love with the unnamed American Neil (Ben Affleck):

We get shots of her skipping, and running from the camera, and twirling away from the camera. There’s a constant lightness. Light kisses. Light touches. Trees dappled by sunlight. Then more fucking twirling.

I in you
You in me

I’m already bored with it. It feels like bad e.e. cummings to me.

I mean, what is the problem for Marina and Neil? What is the story?

They meet in Paris, fall in love, move to America with her middle-school aged daughter Tatiana (Tatiana Chiline). At first, Tatiana loves it all. She’s like her mother. They dance through the grocery aisles. “Everything is beautiful here,” she says in the grocery store. “Look how clean it is!” CUT TO: Neil, a kind of environmental engineer, measuring levels of toxicity in the soil. There’s lead; there’s cadmium. People are getting sick and dying. That’s the secret of America: It looks clean but it’s not.

Then Tatiana goes to school. She doesn’t like it. She’s a cute French girl with a cute French accent but she doesn’t fit in. We see girls talking, doing cartwheels, and then Tatiana is complaining she has no friends. “We need to leave,” she tells her mother. “Both of us. There’s something missing.” Can she not do cartwheels? Is that the problem?

And what of Neil? Let’s talk of Neil. Who the fuck is Neil? Neil is basically Malick, since this story is based upon Malick’s 1980s romance with Michčle Morette, but he gives himself short shrift here. We get all the thoughts twirling through Marina’s little head but little of what Neil is thinking or feeling. She’s light, he’s heavy. She’s a ballerina, he’s a bear. She represents the evanescence of love, he represents—whether Malick intended it or not—something more stolid.

That’s the thing. The movie is about the inability to hold onto this feeling, this love, whether it’s the love between a man and a woman or between a man and God. Here’s what Father Quintana (Javier Bardem), who is losing his faith, tells his parish:

That’s what we strive for: the love that is like a spring coming up from the earth: constant.

Neil actually kind of embodies this. Doesn’t he? At the least, he never seems too deeply in love and thus never seems to fall too deeply out of love. It’s Marina who goes from twirling through all the delights of the world to trashing the house.

Neil’s problem
Neil has a different problem, also articulated by Father Quintana, who tells his parish the following. It’s the most meaningful part of the movie for me since I felt myself in the words:

That’s beautiful. That’s enlightening. And it’s Neil. He’s the one who hesitates. Marina’s visa is about to expire, he needs to marry her, but he hesitates and she returns to France.

You know what? I was kind of relieved. I thought, “OK, maybe now we’ll get a story.” No such luck. Neil falls into it with Jane (Rachel McAdams), an old high school flame, who has a ranch but lost a daughter, and they do the love thing for 15 minutes (voiceovers, magic-hour light, fields of wheat), before Marina contacts Neil again and returns. And there goes Jane. What was the point of her?

She has a beautiful, loud Italian friend (Romina Mondello), who teaches her to be crazy and loud. She meets a carpenter, an echo of Neil, with whom she has an affair at an EconoLodge. The story is unspecific but the places are very specific. Malick does that well. He does America well—like Nabokov in “Lolita.” Flat lands and big sky and loud marching bands and the screech of roller coasters.

Don’t get me wrong. The film is shot beautifully. It’s gorgeous and deep. But the story in the foreground is gorgeous and shallow.

My problem
So their love dries up. It’s a stream that goes dry. Earlier Father Quintana says this:

You fear your love has died; perhaps it is waiting to be transformed into something higher. Awaken the divine presence which sleeps in each man, each woman. Know each other in that love that never changes.

That’s what these characters are striving for: the thing that never changes. But of course it keeps changing. Where did they think they were? Where does Malick think he is? How old is he anyway?

This is what Father Quintana says of God:

Everywhere You are present and still I cannot see You.

That’s how I felt about “To the Wonder.” Malick was present in every frame but I could never see his point.