It’s a testament to director Taika Waititi (“What We Do in the Shadows”), and the writing team (Eric Pearson, Craig Kyle and Christopher Yost), not to mention the improvisational talents of the cast, that this doesn’t seem like too much of a disconnect. But does it undercut the drama? If you keep winking at the audience, or at each other, how much does the stuff on screen matter?

Actually, let’s break down each of above losses and see. Do these losses matter? To us. OK, to me. 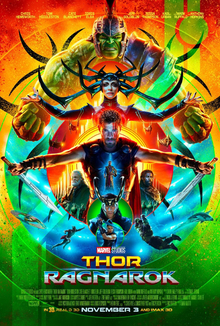 Asgard itself. It’s an idiot realm with a rainbow bridge. In the first Thor movie they describe it as a “beacon of hope” but to whom? They’re a monarchy, for freak’s sake. Here, we’re told time and again that “Asgard is a people, not a place,” which allows for its destruction, because the people survive a la “Battlestar Galactica.” But this doesn’t exactly help. Because the people—beyond Thor, Loki, et al.—are really fucking boring. They huddle together in clothing left over from some ’50s Biblical epic or ’70s “Planet of the Apes” episode, in constant need of saving. They’re great huddlers. You need huddling? Go Asgard. But not missed. A zero on the 0-10 missed scale.

His eye. One moment it’s there, the next moment his older sister, Hela (Cate Blanchett), gouges it out. He fights the rest of the last battle with a bloody empty socket, then pilots Battlestar Asgardia with the kind of eyepatch Odin always wore. It’s a bit of a shock—Thor loses an eye!—but puts a deserved chink in his armor. He’s no longer pristine. Plus Stark Industries can create a fake eye if they want to. A four on the missed scale.

His locks. To me, not many guys look good with long hair but Hemsworth pulls it off. But he looks even better with short hair. 1.

His father. I love me some Anthony Hopkins but was there ever a worse father? In the first movie, after the war with the Frost Giants, he not only brings back an enemy baby, not only raises it as his own, but sets up a rivalry with his biological son. “Only one can ascend to the throne,” he tells Thor and Loki, “but both of you were born to be kings.” Thanks, Dad. Later, he strips Thor of his powers and banishes him to Earth, then goes into an “Odin Sleep” that allows Loki to take power and create havoc. In the second movie he just gets everything wrong. At one point, for example, he shouts, “The Dark Elves are dead!” right before the Dark Elves attack. And in this one? He dies at the beginning, but not before telling Thor and Loki, “Oh, by the way, you have an older sister who went crazy with power, and whom I’ve entombed all these years, but with me gone she’ll be back. With a vengeance. And she’s way more powerful than you dudes. Bye.” Plus he’s not even gone. He returns the way Obi-wan Kenobi returns in the original “Star Wars” movies: to dispense wisdom. Such as “Asgard is not a place, it’s a shitty huddling people.” Missed scale? Zero.

His hammer. This is the one that really hurts. And yeah, Dead Odin tells Thor that his power was never in his hammer, it was in him all the time, allowing him to become all Lord of Lightning and shit and defeat Hela. But it ain’t the same. Thor without his hammer is like Spider-Man without his thwip, Wolverine without his snkt. Something indelible is lost. Missed scale: 10.

Again, for a movie that’s down-to-Earth figuratively but never literally (i.e., we’re always in various “astral realms” rather than on terra firma), “Thor: Ragnarok” ain’t bad, just undeserving of its 90+ Rotten Tomatoes rating and general critical acclaim. Hemsworth’s comic timing is excellent, Blanchett is slitheringly good, Jeff Goldblum kills as Grandmaster, an emperor in another realm forever pitting warriors against each other, and Tadanobu Asano as Hogun makes a short, futile stand against Hela that feels meaningful—maybe because Asano doesn’t wink at us. His sacrifice feels real and noble because he takes it seriously.

Tessa Thompson, recent of “Dear White People” and “Creed,” makes a credible Valkyrie, even if forever neutralizing Thor with an electronic device seems an easy out. Plus she seems an asshole. As does the Hulk (Mark Ruffalo)—regaled on Grandmaster’s planet as the ultimate warrior. BTW: Do we ever find out why he stays the Hulk for two years? Is it the air on that planet?

The mid-credits ending scene is like the beginning of “Star Wars”: our smaller ship of good guys being dwarfed by the bigger enemy ship of bad guys, indicating the size of the problem. It sets up “Avengers: Infinity War,” due in May 2018, with its All-Star cast, and, after six years of teasing, Thanos. Let’s hope it doesn’t overdo the winks.