I’m not sure why I like these movies so much, based, as they are, on a BBC TV series in which Steve Coogan and Rob Brydon, playing versions of themselves, travel around England (“The Trip”) or Italy (here), ostensibly so Rob can write a foodie piece for The Observer, but really so they can amuse themselves and us with the following: good imitations of Brits (Michael Caine, Hugh Grant), bad imitations of Americans (Al Pacino, Robert De Niro), and thoughts about life, career, fidelity, and death. We also get many allusions to movies and literature.

One of the main selling points for me, to be honest, is this last part: the literature. I know tons of people who can riff on “The Godfather” and “Annie Hall” and Batman movies. But quoting Byron and Shelley in the voice of Richard Burton? Riffing on and imitating Gore Vidal and Truman Capote along the Amalfi coast? I’m yours.

These references to “Childe Harold” and “Don Juan” and the Gulf of Spezia almost sadden me, for it makes me realize how absent these things are everywhere else. These are erudite men but we live in a less erudite time and in a less erudite culture. Me, too. I used to know this shit.

A lovely gait
“The Trip to Italy” goes down easier than “The Trip”—as Italian food to British—but that’s not necessarily a good thing. This trip is less tense but also less poignant. 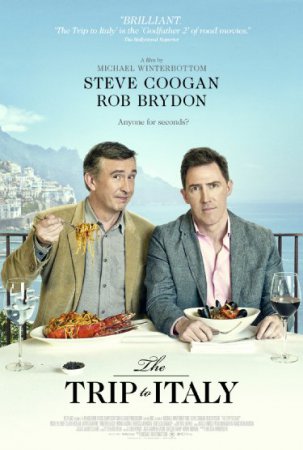 In the first movie/series, the thin-skinned prickliness of Coogan, or “Coogan,” acted as bulwark to the constant yammering of Brydon, or “Brydon,” who kept doing, not only Pacino and Burton, but an unfunny vocal inflection, “the small man trapped in a box.” By the end we realize that this could also describe Coogan, or “Coogan,” who can’t get over his mid-range status, his inability to break bigger, and acts out in petty ways. It can describe us, too. We’re all trapped in some kind of box; most of us get small there.

In “Italy,” most of Coogan’s prickliness is gone, smoothed out by age or the Italian sun, which means our bulwark is gone. Brydon is unbridled. He keeps riffing. His Pacino is over-the-top but at least recognizable (“What is that thing you’re doing with your tongue—a gecko?” Coogan asks), but Brydon can’t come close to Woody or Clint or De Niro. Does he know this? That his American imitations are the impressionist equivalent of Kevin Costner in “Robin Hood” or Dick Van Dyke in “Mary Poppins”?

But the movie’s mostly funny. They’re basically two men trying to outdo each other. They drive down Italy in a MINI Cooper, which alludes to “The Italian Job,” which allows them to resurrect their epic battle over who does the better Michael Caine impression. Coogan has it all over Brydon on the Americans but I’ll give Brydon this one: his Caine is excellent. From there, doing Caine as Alfred in “The Dark Knight Rises,” they riff on Christian Bale and Tom Hardy’s incomprehensible accents.

Their wit is quick:

Brydon: Where do you stand on Michael Bublé?
Coogan: His windpipe?

They’ll take any topic and go. Among them:

The Alanis talk arises because they’re listening to her driving down the coast. At one point, Coogan imagines a conversation between himself and the singer in which he expertly skewers the superficial rebellions of youth: “I admire you taking a stand against society’s mores by wearing your jumper inside out, but enough’s enough.” My god, make a T-shirt of that.

There are subplots. Brydon reads for a role in a Michael Mann film and gets the part—to Coogan’s jealousy. He also has a fling with a British woman on a boat.

Coogan’s subplots? Not much. He’s leaving LA. His son joins them. Two other women join them as well—Yolanda (Marta Barrio) and Emma (Claire Keelan)—but I could never figure out who they were. Is Emma supposed to be Coogan’s agent? And Yolanda? She of the red dress? Which made me think of Buck O’Neil? What’s her role in all of this?

Fellows of infinite jest
Where does it all lead? Nowhere, really. The point is the journey, and it just kind of ends. I thought a better ending would’ve been when they were arguing in the Fontanelle Cemetery in Naples, surrounded by skulls. Brydon picks up a skull and does and bit of “Hamlet” but screws up the line:  “Alas, poor Yorik, I knew him well,” he says, which Coogan corrects: “I knew him, Horatio.” Then he does the rest:

A fellow of infinite jest
He hath born me on his back a thousand times ...
Where be your gibes now?
Your gambols, your songs?

The look he gives Brydon here is poignant.

Is literature their means of communicating about the deeper aspects of life they can’t otherwise talk about? Middle age and death hangs in the background on this trip, as it always seems to on trips, while pop culture dominates the foreground. The food hardly factors in at all.