I threw up in the early morning hours after watching “The Specials.” Unrelated, I’m sure.

Who was it that told me this movie was good? Any of you? This is me shaking my fist at whoever that was.

I’m not much of a fan of one-joke movies, and I’m not much of a fan of movies in which the chief metaphor is Hollywood-related, and “The Specials” is both. It’s about a team of low-budget, B-list superheroes played by a group of B-list actors and actresses and filmed in a low-budget manner. It’s written by James Gunn, who would go on to write the two “Scooby Doo” movies, and directed by first-time director Craig Mazin, who would go on to direct “Superhero Movie,” and it has a tinny, flimsy quality. It feels like something filmed in rooms with wood paneling. There’s no comedic rhythm and less comedy. The heroes’ super-powers are never on display. It’s anti-special.

One of the leads is Jamie Kennedy, a kind of break-out star amid the young and loutish in the late 1990s, who has never said one thing that made me laugh. 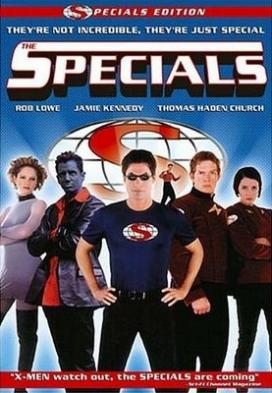 He keeps his string alive here. He plays Amok, blue-skinned and dickish. His bit is to say rude, unfunny things, particularly about women. It’s how we imagine Jamie Kennedy is.

Another of the leads is Rob Lowe, fresh from “West Wing,” who plays a good-looking, two-timing superhero named The Weevil. It’s how we imagine Rob Lowe is.

And so on. Fresh-faced Jordan Ladd, daughter of Cheryl, plays fresh-faced new member Nightbird, with bird-like superpowers (including laying eggs), who has admired the Specials ever since she was a kid. Thomas Haden Church is The Strobe, the nominal leader, who takes seriously the role-model aspect of superherodom, while Paget Brewster plays his wife, Ms. Indestructible, who is growing weary of her husband’s blowhardness, and is thus having an affair with The Weevil in the backseats of cars.

Kelly Coffield of “Mad TV” plays Power Chick, who is raising Alien Orphan (Sean Gunn), who is bald and green and bendable. The bit goes nowhere. Judy Greer is one of the few bright spots as the super-cynical Deadly Girl, who is offered a gig with The Femme Five by Sunlight Grrrll (guest star Melissa Joan Hart), whose ‘90s-feminist name she dismisses with a deadly reaction shot. The movie’s screenwriter, James Gunn, gives himself one of the best bits, playing Minute Man, who is forever correcting folks that his name is pronounced my-NOOT (as in small) rather than MIN-it (as in time). Oh right, there’s U.S. Bill, too. Mike Schwartz. He says nothing funny and does nothing memorable.

I liked the notion of the Specials as “the 6th or 7th greatest superhero team in the world,” and I liked the line about “a holocaust of stretchy people” and the commercial for the Specials’ action figures actually made me laugh out loud. This is the plot point for the first half of the movie: the idea that the Specials don’t get Oscars, they get action figures. But then the commercial is unveiled, and Minute Man’s action figure is black (minority representation was needed), and one hero has Richard Dawson’s head (the company had leftovers from “Hogan’s Heroes”), and Ms. Indestructible’s doll has enormous boobs, and  ... etc. It’s a disaster and pretty funny.

The rest of the movie—in which The Strobe finds out about his wife’s infidelity, disbands the group, then gets them together to battle giant ants who have taken over the Pentagon (which we never see, of course)—contains jokes like this:

Deadly Girl: Has anyone noticed that Mr. Smart has an enormous package?
Mr. Smart: My father, too, had a large penis.