For a director as esteemed as Guillermo del Toro, it’s kind of shocking how few esteemed movies he’s made. It’s really just “Pan’s Labyrinth” and this. Everything else is lesser fare (“Crimson Peak”), B-comic movies (“Blade II,” “Hellboy”) and giant stupid shit (“Pacific Rim”). He’s got one Oscar nom (original screenplay, “Pan’s”), two BAFTA noms (both for “Pan’s”) and a shitload of sci-fi awards.

I guess that’s who he really is: a sci-fi geek. 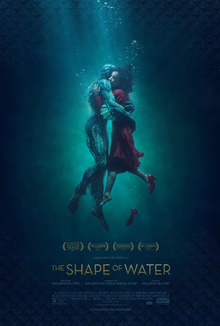 As for this fairy tale, fish-out-of-water love story? Patricia loved it from beginning to end. I liked it. But you know what I liked more? I liked Del Toro talking about it.

In December, he was on NPR’s “Fresh Air” and pointed out that “The Shape of Water” is really a revisionist take on “Creature from the Black Lagoon.” It’s the outsider’s take—the creature’s take. The woman, rather than being desired, is desirous. The creature is a creature, but benevolent and intelligent and curious. The true villains are the white men in charge: scientists and military officials and bureaucrats. I wonder if del Toro considered having Michael Shannon smoke a pipe throughout—like a ’50s era, B-movie scientist hero.

Then he goes deeper:

That's nice. The movie is set in the early 1960s, one of the most frigid parts of the Cold War, but del Toro lets us know why the film is relevant today:

Every time we talk about emotions we do so very guardedly and with the fear of appearing disingenuous. And I wanted to make a completely honest, heart on the sleeve, non-ironic melodrama in which we talk about falling in love with, quote unquote, “the other”—as opposed to fearing the other, which is what we face every day in the news and politics.

Listen to the whole thing. His accent alone makes it worth it.

OK, so I’m a worst-case-scenario person. Sue me. I just couldn’t get past the stupidity of our heroes, Elisa Esposito (Sally Hawkins) and Zelda Fuller (Octavia Spencer), stealing an Amazonian river-god from the U.S. government in 1962, right under the nose of a borderline psychotic head of security, Richard Strickland (Shannon, essentially reprising his “Boardwalk Empire” character), and then ... not doing anything with him. For days. They just fill up the bathtub and let him flop around in there. Then Elisa has sex with him. She fills her entire bathroom with water and has sex with him. Mind you, she lives above a movie theater, and the building is old and made of wood. Fuck the shape of water, what about its weight? That’s risking a lot for one fairy-tale schtup. It’s not exactly staying on the down-low.

Even before then, in the government facility, isn’t Elisa quick to embrace the creature? To assume he’s not harmful? Here’s an egg, here’s another. You have claws and fangs but what the hell, I’ll just hang poolside with you. Within reach.

BTW: He is harmful. Ask the cat.

And what about the cat? Don’t they get over her pretty easily? If this things bites the head off Jellybean, I don’t think I’ll risk my ass helping him escape. Not that he’d get anywhere near Jellybean; she’d mess him up.

With most of this, del Toro is placing his needs as a filmmaker (to create the visually and emotionally dazzling) above the needs of his characters. He’s doing what he wants rather than what they need.

Not budging
That said, Hawkins is wonderful as Elisa, a mute janitor at a government lab, the lowest person on the totem pole, who, despite her mousy exterior, has an inner steel and her own, full, no-apologies sex life. Some of my favorite scenes are her confrontations with the bullying, supertall Strickland. How her eyes don’t budge. How her gaze undoes him because it doesn't bend to his will.

I also loved Michael Stuhlbarg as the most sensitive undercover Russian spy in the world. He brought true emotion, true feeling, to what might otherwise have been a by-the-way character. When he’s killed, shot by his own, it almost physically pained me.

I just wanted the movie to make more sense. Even Cold-War fairy tales should have their own internal logic.