During the movie’s rollout, The New York Times kept saying that they broke the Pentagon Papers story, not the Washington Post, so the movie should be called “The Times” not “The Post.”

Except the movie isn’t about that. It’s about this:

These things coincide, according to the movie, with the risks the Post took in publishing the Pentagon Papers. 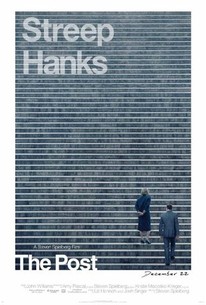 The movie gives full credit to Neil Sheehan and the Times for breaking that story. Hell, the Times is not just present here but omnipresent. It’s the big brother whose shadow you can’t overcome. To Ben Bradlee, it’s as much an enemy as the Nixon White House. More so, in some sense.

That’s actually one thing that I loved about it. While lionizing liberal icons Ben Bradlee (Tom Hanks) and Katharine Graham (Meryl Streep), who are in the midst of a battle with a corrupt Republican administration, the movie lays bear the lie of “the liberal media.” True journalists like Bradlee don’t have political agendas; they have professional ones. Their goal is to beat the other guy to the story.

This isn't a Hollywoodization, by the way. In Bradlee’s memoir, “A Good Life,” from 1995, he writes about the moment the Nixon Justice Dept. got an injunction to keep the Times from publishing more excerpts from the Pentagon Papers—restraining an American newspaper in this manner, he writes, “for the first time in the history of the republic.” Dark days. Was he frustrated? Angry? Nope. More like relieved and energized. “At least the New York Times had been silenced,” he writes, “never mind how.”

That stunned me when I first read it. But Bradley’s agenda isn't political but professional—ruthlessly so. Same with today’s Post and Times and Wall Street Journal. As opposed to, say, Fox News, where the agenda is wholly political. And completely unprofessional.

Zero to 60
That said, I was a little disappointed with “The Post.” It should totally be in my wheelhouse—a historical procedural about historic journalism that’s smart, true, and cares about the details—but I never felt engaged. There was always distance. The movie started on the wrong track and never quite righted itself.

I wouldn’t have begun in 1966 in Vietnam. Or if I did, I would’ve worked in that Daniel Ellsberg (Matthew Rhys) wasn’t just an intellectual; he had been a first lieutenant in the Marines in the 1950s. I did like the dynamic on McNamara’s plane. Ellsberg is called back to give his assessment, says the war isn’t improving, and Bob McNamara (Bruce Greenwood), rather than discount him, agrees. Angrily agrees. Yet on the tarmac, before the press, he still gives LBJ’s and the Pentagon’s upbeat assessment. That helps sour Ellsberg, which helps explain his later decision to leak the Pentagon Papers.

Here’s something the movie doesn’t wonder over that both Bradlee and Graham, in their respective memoirs, do. From Graham’s “Personal History”:

It’s hard to understand why Nixon and his people were so upset by the publication of these Papers, which were essentially a history of decisions made before they were in power. Nothing in them was a reflection on Nixon. I believe the administration’s reaction was an example of its extreme paranoia about national security and secrecy in general.

Overall, the journalistic side of the story ain’t bad. I like Bradlee wondering what Neil Sheehan is up to—“Haven’t seen his byline in a while”—and the amateur spy games to try to suss it out. I like everyone reading the Times the day the story breaks. It’s assistant managing editor Ben Bagdikian (Bob Odenkirk) who tags Ellsberg as the leak, and who contacts him from the usual public pay phones, and who travels to Boston to get a copy. The sorting of the papers in Bradlee’s living room is good—with the daughter selling lemonade outside—but does it have the zip it should? I associate Bradlee with energy, with that ballsy, freewheelingness of WWII vets who moved through life as if stunned they were still alive and decided to make the most of it. The movie doesn’t have that verve. Bradlee and Graham were the upstarts, the unknowns, trying to prove something at ages 49 and 53 respectively, and director Steven Spielberg cast the grand dames of American cinema, Hanks and Streep, ages 61 and 68 respectively, and maybe that was a mistake. There needed to be a greater hunger there.

The second half of the story is Graham’s, who is often the only woman in a room full of accountants and lawyers, and who, according to the film, is virtually mute at the start. She’s smart, a good study, but can’t perform. Then she finds her voice.

The pivotal moment occurs after the reporters do their work and the Post’s lawyers warn about publishing it. From Graham’s memoir:

I was extremely torn by Fritz’s saying that he wouldn’t publish. I knew him so well, and we had never differed on any important issue; and, after all, he was the lawyer, not I. But I also heard how he said it: he didn’t hammer at me, he didn’t stress the issues related to going public, and he didn’t say the obvious thing—that I would be risking the whole company on this decision. He simply said he guessed he wouldn’t. I felt that, despite his stated opinion, he had somehow left the door open for me to decide on a different course. Frightened and tense, I took a big gulp and said, “Go ahead, go ahead, go ahead. Let’s go. Let’s publish.” And I hung up.

The movie, to its credit, captures all of this—particularly the silent interaction between her and Fritz Beebe, a legend at the Post, played by playwright Tracy Letts (“August: Osage County”). It’s nearly the same role he plays in “Lady Bird,” isn’t it? The wise, patient man next to the leading lady. Just as Bradley Whitford (“Get Out”) gets to play another asshole.

Anyway, it’s a great moment, and Streep nails it. Graham’s arc is the arc of the film—from figurehead to actor—but it feels overdone. It’s too obvious what she’s lacking, and then, boom, all of a sudden she gets it. How nice. And this is even before Spielberg—forever underlining points—films Graham, after the SCOTUS decision, making her way through the crowd, which suddenly turns into only admiring women. I don't buy it—the trajectory. Pretending she only found it at the 11th hour does a disservice to her and to the movie.

27 for 30
“The Post” is Steven Spielberg’s 30th feature film and I’ve seen 27 of them. He and I have spent a lot of time together in the dark. Here's a question: As he’s aged, as his future has receded and his past has grown, have his futuristic sci-fi movies become more dystopian (the idealism of “Close Encounters” and “E.T.” giving way to “War of the Worlds” and “Ready Player One”), while the historical movies have become more nostalgic?

The nostalgia is certainly thick in this one. I learned more about how newspapers were printed than ever before—and I'm the son of a newspaper man. And those newspapers were read—from beginning to end. People didn’t just see a headline, or a tweet or a meme, and share it. Those were the days.

I’m with him. I just find it ironic that Spielberg, the former wunderkind, has such love for what no longer is—for what’s been replaced by the very thing that used to make his eyes light up: the whiz-bang of it all.