In Asghar Farhadi’s “Le passé” (“The Past”), we often see the thing before knowing what the thing means.

So a pretty woman, Marie (Bérénice Bejo), greets a man, Ahmad (Ali Mosaffa), arriving at the airport, with a smile and a wave, but he’s not her lover; he’s her estranged husband returning to sign the divorce papers. So her lover, Samir (Tahar Rahim of “Un Prophete”), lies in bed while she administers eyedrops to him. The next day, in by-the-way fashion, we discover he’s allergic to all the paint scattered around the house. So the oldest daughter, Lucie (Pauline Burlet), is distant and uncommunicative with her mother. The story behind that, with its many twists and turns, takes most of the movie to tell.

We first see the thing, in other words, then we find out its past.

Caché
This is a beautiful movie, by the way. There are small, exquisite scenes. It all seems so simple. 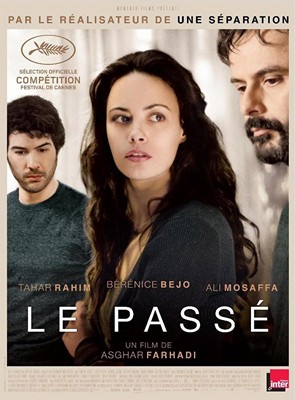 I kept wondering, “Why can’t other filmmakers make scenes that feel this real, this straightforward, this interesting?”

I’m thinking of an early scene. Ahmad arrives and expects to get a hotel room, but Marie is putting him up at her place. Is he thinking they’ll sleep together? One last time? But he finds out she’s living with a guy. Samir. He’s dropped into a situation. As are we.

There are two kids playing in her small yard: a boy and a girl. You expect them to squeal with delight when they see Ahmad but it takes a moment before the girl, Léa (Jeanne Justin), even realizes who he is; and even then the boy, Fouad (Elyes Aguis), just squints, frowns, doesn’t get it. But he doesn’t like it. This new man helps blowdry his mother’s hair? That seems ... wrong. (To us, too.) He has to move bedrooms to accommodate him? Fouad does so petulantly, dragging his blankets and pillows around, saying “What a pain.” Ahmad is gentle with him, though. He talks to him. By now we know Ahmad is not the boy’s father but it’s not until Fouad drags his pillow and blankets back downstairs and knocks over the paintcan in the hallway, and Marie blows up, chasing him around, that we find out she’s not his mother, either. “You’re not my mother!” he shouts. Then she leaves for work at a pharmacy and Ahmad is left to clean up both messes: the physical and the metaphoric. He does so with calm and grace. He gives the boy the one thing he doesn’t have: power and control. “Is it because I’m here?” he asks, about the acting out. “Do you want me to leave?” he asks. There’s a pause. Then Fouad quietly shakes his head.

That the small, exquisite scene I was thinking of.

The movie keeps doing this. There’s a moment, halfway through, with Samir and Marie in their car. Tensions have risen in the home, and between them, because, you know, her ex is staying with them. They kind of look alike, too, Samir and Ahmad. At least Lucie points this out to Ahmad. Does Samir wonder about it? In the car, stuck in traffic, they’re silent. Samir is driving, manual, then finds Marie’s hand on his on the stick. A conciliatory gesture? He looks at their hands together, then over at Marie, but she has her eyes closed as if in reverie. Is she thinking of Samir ... or Ahmad? Or is she just tired? But he shakes her hand off, which startles her awake. Now she wonders: Is he angry?

It’s a small, everyday scene, but so much is suggested by it.

Revelations keep coming. What happened to Fouad’s mother? Turns out she’s in a coma. For much of the movie, Ahmad is like a gentle detective of the heart, trying to figure out why Lucie, who is not his child, (none of them are), is estranged from Marie. It’s like peeling an onion. One answer just leads to another, deeper answer.

First Lucie says she doesn’t like “that jerk,” Samir. Then she admits it’s more about her mother: Men stay for a few years, then leave, and Lucie is tired of it. Ahmad is implicated here, too. Then Lucie admits it’s the affair: her mother had an affair with Samir, and afterwards Samir’s wife tried to kill herself, and that’s why she’s in a coma. They caused it. With their affair. Awful stuff. Or did they? Samir doesn’t think so. He runs a dry cleaner, and five days before the suicide attempt his wife had a meltdown with a customer. The attempted suicide had nothing to do with him and Marie. His wife didn’t even know about it.

Except she did. Because Lucie told her. That’s the awful secret Lucie’s been carrying. That’s why she’s been distant. She can’t bear her own culpability.

In this way we keep getting deeper into the past until it threatens the stability of the present. Or is it merely clearing the way for the present? Or both?

Near the end, we get talk about letting go of the past, living in the present, yadda yadda. A lesser movie would’ve gone in this direction. It would’ve given us this wish-fulfillment fantasy, this correct way of being, this problem solved. Not here. Here, Samir visits his comatose wife, bringing along her perfumes and his cologne in a last-ditch effort to revive her. He’s heard the olfactory memory is our longest-lasting—Proust was right about that—and he wants to test it. But nothing happens. And we see him walking away from the room, and down the hallway, and away from the past.

A lesser movie would’ve ended there.

But Samir stops, turns, pauses. A better movie might’ve ended there: man forever caught between past and present, like Antoine Doinel at the shore.

Instead, Farhadi (“A Separation”) has Samir walk back into the room. He tries once more with the cologne. “If you can hear me,” he tells his wife, “squeeze my hand.” Then the camera pans to his hand in her open hand. We’re watching, waiting, for any movement. But there isn’t any. That’s it.

And that’s the best ending of all for “The Past.” A man being held, and not, by something that’s dead, and isn’t.