“The Other Woman” wants to be the cheating husband version of “9 to 5,” the 1980 comedy in which Jane Fonda, Lily Tomlin and Dolly Parton take revenge on their sexist boss (Dabney Coleman).

It’s not. It’s mostly unfunny, often awkward, at times painfully bad. But don’t just trust me. Trust the several members of the movie’s key demographic (30-40something women) who left two-thirds of the way through the Friday evening show at Pacific Place theater in downtown Seattle. Was it during yet another make-up/break-up between the principle characters, Carly (Cameron Diaz) and Kate (Leslie Mann)? Was it the umpteenth time Kate was thinking of taking her awful husband back? Maybe it was when the movie, with the obviousness of movies, pushed Carly, tough, high-priced, mergers & acquisition attorney Carly, into the arms of Kate’s laid-back, bearded brother, Phil (Taylor Kinney), a so-sweet-he-doesn’t-register carpenter who is in the midst of building an extension to his home. On the beach. In the Hamptons. On a carpenter’s salary.

Man, I envied those women leaving. That’s the burden of the movie critic. You all are free to go but we’re doomed to stay until the credits roll.

Revenge served stupid
The movie begins with Carly and Mark (Nikolaj Coster-Waldau: Jaime Lannister of “Game of Thrones”) humping in a hotel room, then enjoying that idyllic glow of the early part of a good movie relationship in New York: snogging in front of MOMA, sailboats in Central Park, and high-rise, open air dinners, with Etta James’ “Sunday Kind of Love” on the soundtrack. 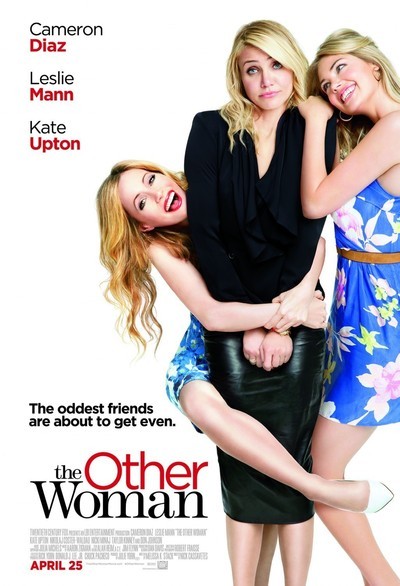 Then the alarm rings and the woman in bed with him isn’t Carly but Kate, his wife, sweet, ditzy Kate, who has no idea he’s sleeping around on her. Neither does Carly for that matter.

But the alarm clock is a good bit. It’s one of the last.

Eventually, Kate finds out about and confronts Carly, then cries on her shoulder, then gets drunk as Carly watches. Seems Kate has no one. All their friends are his friends, too. And she worries about being single again. The last time she was single, she says, she was 24, when you could date anybody. Now the possibilities have shrunk to “a shallow puddle of age-appropriate men.”

The movie is about female friendship but I never bought any of it. There’s no chemistry between Diaz and Mann, and Kate is way too clingy and pathetic while Carly is way too icy and unencumbered. Yet the latter keeps coming to the aid of the former. Why? And when Sports Illustrated swimsuit model Kate Upton turns up (in the Hamptons) as a ditzier, boobier, second mistress named Amber, and all three plot against Mark, well, I didn’t buy that, either. Upton is supposed to be the Dolly Parton character here, but Dolly had a spark. Upton tries, but there’s no there there. There’s only there there.

The revenge they want to serve is cold. Carly puts laxative in Mark’s scotch and he shits his pants at a high-end restaurant. Kate puts estrogen in his veggie shake and hair remover in his shampoo. Halfway through, his hair begins to fall out and he gets super-long, super-sensitive nipples. I assumed by the end he’d be bald and bloated. Nope. Neither. It’s all forgotten. Because? Who knows? Maybe because we needed another scene of Kate having second thoughts about breaking up with him.

Besides being a serial adulterer, Mark has a bit of Bernie Madoff in him. He takes money from investors and deposits it in the Bahamas in a dummy corporation under his wife’s name (so he’s not liable). But she finds out, and, with Carly’s help, and with Amber along for the bikini shots, she removes all the money and gives it back. Then the three gal pals confront Mark in a conference room at Carly’s high-rise law firm. When he discovers he’s broke, he turns furious in a way he never has in the movie. Then he does the following: 1) crashes into a glass wall, breaking his nose; 2) crashes through a glass wall, breaking who knows what; 3) watches his car getting towed; and finally, 4) he’s punched in the face by Carly’s dad (Don Johnson), who has a thing for younger women.

9 to 5 + 34 = ?
I actually wonder about Mark a little bit. At least, I wonder about him more than the movie does. Why, for example, did he stay with Kate all of those years? Was there something there he needed? Did he love her? Did he love something about her? Was it comfort or dummy corporations? But “The Other Woman,” written by Melissa Stack (her first), and directed by Nick Cassavetes (his unremarkable ninth), is only interested in Mark being awful, and getting his bloody comeuppance.

How odd, too, that Carly’s dad gets the final shot since he’s a womanizer himself. At least he dates women his daughter’s age. But that’s cool because it’s not cheating. He also frequents a “no hands” bar, where customers get backrubs from Asian beauties, and are fed their drinks, and, one assumes, their food, by same. One assumes a lot. But that’s cool cuz not cheating.

Nearly 34 years have passed since “9 to 5” debuted, and, for all its faults, at least it was about something: sisters doing it for themselves, etc.

Here? What’s the point? That this one man is awful? That people like to sleep around and handsome people are better at it? Or is it just about personality? Kate has to stand up for herself more and Carly has to open herself up more, so that happens. In a quick afterword, we’re told that Kate starts her own multimillion-dollar business as an idea-person for start-ups. Because she had that one. Meanwhile, Carly winds up married to and pregnant by Phil.

And Amber? Who may or may not have ever had a job? She winds up on a beautiful, deserted beach with, of course, Carly’s dad, Don Johnson. He’s 64 and she’s 22. But that cool cuz not cheating.